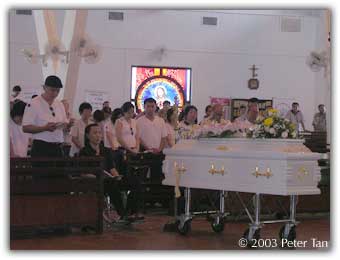 In the late-sixties and early-seventies, Mum and I used to lived in a rented room in a big plank house in the outer suburbs of Ayer Itam. The house had a big compound. Mum reared chickens and cultivated bananas. We had a raised platform that was bed. Mum would cook in the kitchen and we ate in the room. At night, a large mosquito net was strung over the platform that we slept on.

Mum would lullaby me to sleep while patting my buttocks. Night after night, she would hum the same tune that comforted me so much. As I grew up and we moved out of the rented room to a brick terrace house, I would still catch Mum humming the tune while she was sewing or doing some other chores. Mum liked to sew. She would make dresses for herself and those that she knew. She would also make pyjamas, quilts and curtains.

Sometimes, I would unconsciously hum the same tune that Mum used to lullaby me with. I did not know the significance of the tune. I thought it was one of those old songs that Mum liked. Whatever it was, the tune seemed to make Mum happy while she was humming it. It did the same to me.

During Mum’s Funeral Mass at the Cathedral of the Holy Spirit, the congregation sang a very familiar tune. There and then, I realised that all these while, Mum had lullabied me to sleep with a very popular Christian hymn titled What A Friend We Have In Jesus. It took more than thirty years for me to realise what Mum have been inculcating in me all those years. I am sure Mum was very comforted wherever she was when the hymn was sung in her honour.