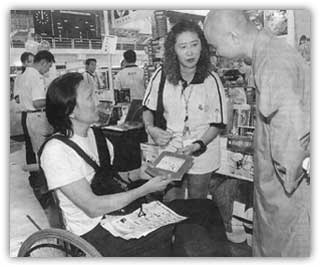 This photo was taken from Page 5 of The Star featuring news on Microfair 2003. Follow this link for the article.

PENANG: Walkways between booths at Penang International Sports Arena (Pisa) in Relau were congested yesterday as more than 14,000 visitors turned up for Microfair 2003.

The exhibition, which entered its second day, saw a long queue at the entrance, which was opened at 11am.

The number of visitors was double that of Friday.

Among those who thronged the fair for bargains were computer-savvy monk Kai Soon See, 36, who was looking for CD-Rs and a laser printer for the Ang Hock See Temple in Perak Road.

UNIQUE DEVICE:Tan and Kai checking out a voice input writer with the help of Compusonic Computer Centre marketing manager Rachael Leng.
Wheelchair-bound copywriter Peter Tan, 37, who suffered spinal cord injury during a diving stint 20 years ago, was also among the crowd to check out what was new.

Tan, who has his own website www.petertan.com, said computers were very useful for the disabled who could get all the information they wanted from the Internet.

The exhibition had latest gadgets on display including personal digital assistants, laptops, digital cameras and mobile phones that were small but powerful.

“This is small and beautiful, isn’t it?” a salesman said, as he dangled several thumb drives at visitors.

Digital camera stall operators competed to outdo each other with small, sophisticated machines and printers that produced instant prints.

“Our target groups are professionals, managers and executives and we find them here at Microfair,” said Heng.

JobsDB.com general manager Benny Moe said they had good response to their newly-launched feature which enabled jobseekers to record a video resume.

Adecco Personnel operations and training executive Jann Saiboo said over 100 jobseekers registered on Friday and they expected more to sign up during the weekend.

Organised by The Star and Star In.Tech, the fair also features the Buy & Win Contest offering RM20,000 worth of prizes including a Toshiba notebook worth RM6,588, a HP Pavilion desktop and a BenQ handphone.

Entry forms are available to those who buy RM50 of products from any of the booths.

The fair also features a technology showcase on the Mac OS 10.3 Panther at 2pm, a talk on Personal Digital Assistants (PDAs) at 4.30pm, Adobe Photoshop for Beginners from 6.30pm to 7.30pm and Secret to Capturing and Printing Great Digital Photos at 2.30pm and 6.30pm.