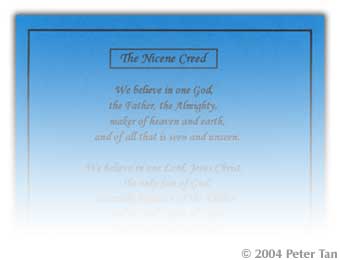 After the Rite of Election, catechumens are now known as the Elects – those selected to be initiated into the Catholic Church during the Easter Vigil. The Elects enter into an intense period of purification and enlightenment. During this period, the Elects participate in several further rites, chiefly the Three Scrutinies.

These Scrutinies are celebrated at Mass on the third, fourth and fifth Sundays of Lent. They are rites for self-searching and repentance, to heal all that is weak and imperfect within and strengthen those which are positive and good before the Elects are baptised.

Together with the other Elects of the Cathedral of the Holy Spirit, I participated in the First Scrutiny in last Saturday?s Sunset Mass and the Second Scrutiny today. Among the rites that were performed during the Scrutinies were the Invitation to Silent Prayer, Intercession for the Elect, Prayer of Exorcism and the Laying On of Hands. Those rites were all carried out to ask for God to protect us from temptation, deliver us from evil and to give us strength in Christ.

Today?s Scrutiny also witnessed the Presentation of the Creed to the Elects. This is where the Church hands on to the Elects the Nicene Creed, after which the Priest together with the congregation and the Elects recited the Creed to profess our faith in God, Jesus Christ, the Holy Spirit and all that They encompass. The Nicene Creed is essentially the basic tenets of the Christian belief that was put together in 325AD in Nicea by the first ecumenical council attended by all the Christian Bishops of the time.

* Click on the image above to see the full copy of the Nicene Creed.