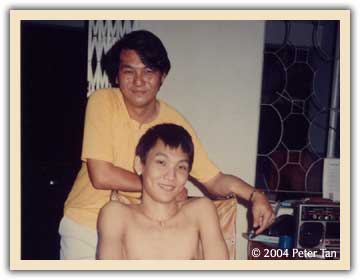 The Hollies’ He Ain’t Heavy, He’s My Brother never failed to tug at my heartstrings. Many times when the burdens of life weighed me down, I wished I had a brother who would carry me through those arduous patches. A recognizable voice, a firm pat on the back and a knowing concerned look would have been more than enough to soothe a troubled mind. Knowing that one has a sibling who will always be there come rain or shine is like living in a house with a foundation so strong that no storm can blow it down. That should be a concerting feeling indeed.

Beyond doubt, I was a burden to those who had to care for me. Without the goodness of all the people around us who had so kindly lent a helping whenever we needed one, Mum would have had a difficult time looking after me. How many of us would expect our mothers to nurse us when they are already into their sixties and seventies? Mum never complained. Still, there were some activities that were beyond Mum. And most of the time, Mum would call on her nephew Peter for assistance. Mum was the eldest and Peter’s father was the second in a family of five siblings. Every Saturday, for years, he would diligently ferry me to physiotherapy and helped me with the exercises. Peter never complained, too.

Before I was strong enough to transfer myself to and from the wheelchair, Peter would gingerly carry me into and out of the car. That is why whenever I hear this song there would be tenderness deep in my heart. Try carrying a 180cm and 65kg paralysed body with limbs flopping all over and you can begin to see the burden that he had partaken. That was despite having two bad knees that he suffered in an accident that involved his superbike crashing and then sliding under a speeding truck. It was a miracle that he came out of that alive. Now he still takes me everywhere whenever I asked him. Everyday I pray that he will be blessed for all the goodness that he had so selflessly showered on me. Thank you cousin. Truly, you are the brother I never had.

8 thoughts on “He’s My Brother”