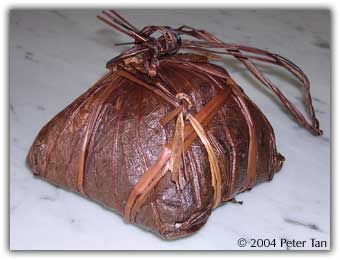 Wuan brought some bak chang (glutinous rice dumplings) that she bought from Petaling Street when she came yesterday. Among them was a huge dumpling wrapped in lotus and bamboo leaves that costs RM8.00. We had it for afternoon tea just now. It was not as nice as we had expected and certainly not worth its price. There was a piece of belly pork, chestnut, two small cuts of shitake mushroom and one dried oyster inside, wrapped in a layer of green beans and then a layer of glutinous rice. I should not have eaten such heavy food as I have just recovered from two bouts of fever recently. Glutinous rice is known to cause indigestion when consumed even in moderation. However, after starving myself for so many days, it was like heaven-sent. 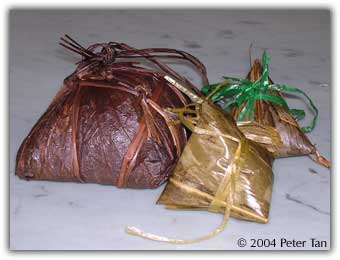 On the fifth day of the fifth lunar month, the Chinese celebrate the Duan Wu Jie, also known as the Dragon Boat Festival or the Dumpling Festival. All across South-east Asia, dragon boat races are held to commemorate this day in long shallow boats with a dragon head at the bow. However, the legend of the dumpling goes deeper than that. In the fifth century B.C. Qu Yuan, a well-loved Chinese court official and poet committed suicide by leaping into a river to protest the corrupt state of the country. Upon hearing the news of his death, the people living nearby searched the length and depth of the river for his body in order to give him a proper burial but they were unsuccessful. In despair, they made dumplings and threw them into the river, hoping that the fishes would nibble on the dumplings instead of the body. This year, the Duan Wu Jie falls on the June 22. This festival almost always coincides with the summer solstice which is also the longest day of the year. It is believed that one can stand an egg on its end on this day. 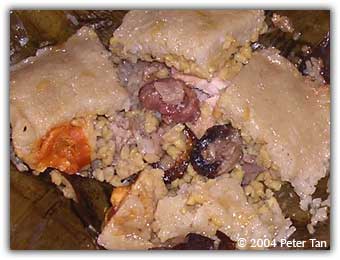 In modern times, the meaning of the dumplings have been lost to gluttony and commercialism. I am guilty of it, too. I eat dumplings because they taste nice, and not for the inherent significance. Moreover, they are available throughout the year. Ideally, the perfect dumpling should be firm to the touch yet soft in the mouth. The soya sauce and other seasoning should be well mixed into the glutinous rice. The texture of the rice should be smooth to the tongue. It should contain a generous portion of belly pork, chestnut, dried prawns, salted egg yolk and shitake mushroom. It is the fatty portion of the pork that makes the dumplings extra delightful. Most of the ingredients are those that I should consume with restraint. I do not eat these dumplings very often and I guess indulging in it once or twice a year should be all right, I hope.