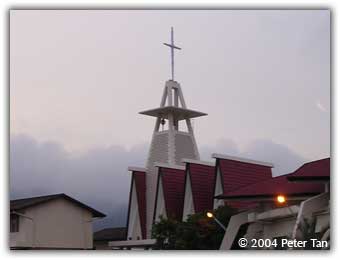 Mum?s First Death Anniversary was a day of contemplation for me. I am eternally grateful for having a mother like her. She was loving, kind and most of all she did not let her lack of nursing skills from nuturing me back to health when I broke my neck. She was creative and resourceful, using her own initiative to create an environment that was conducive to my convalescence and gave me food that restored my vigour. 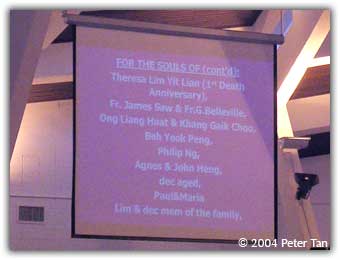 Adel had arranged for a prayer for Mum during the Sunset Mass on Saturday at the Cathedral of the Holy Spirit. One year ago, I would not have imagined that I would be celebrating Mass in a church. Life is such that we go one full circle only to find ourselves back where we began. 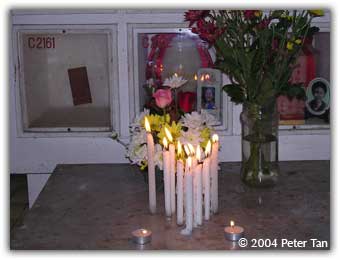 On Sunday, Peter, Cheng Ee (Mum?s youngest sister) and I went to the columbarium where Mum?s ashes were interred as a sign of remembrance and respect. We recited our own prayers for the repose of Mum?s soul. I was overcame by the occasion and sniffled. I tried hard to hold back the sadness and tears that overwhelmed me. 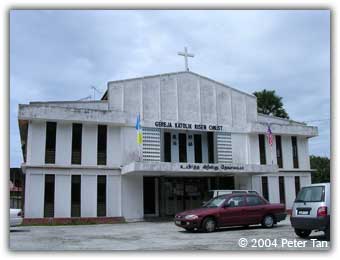 We made our way to the Church of the Risen Christ in Ayer Itam just in time for the Sunday Morning Mass. Cheng Ee had put Mum?s name down for a prayer in the memory of her first death anniversary. The Mass was in Mandarin but I could just about follow the proceedings. Catholic Masses are celebrated in the same manner worldwide which made it easy. Whatever the language or dialect, the arrangements are almost all the same from the beginning to the end.