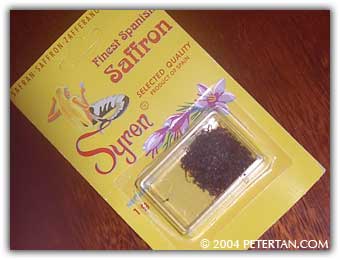 Looking to eat something other than plain rice that I have been eating for most of my meals, I trawled cyberspace for some aromatic rice recipes. Risotto was my first choice but it specifically called for the Italian Arborio rice to be used. That rice is as foreign to me as the Italian language. Remembering that Rosalynn had given me two boxes of Spanish Saffron, I settled on cooking Saffron Rice. I did not have two of the ingredients which were Basmati rice and ghee. In place, I used the rice that I eat everyday and butter and olive oil. The aroma was nice and buttery but it was a little lumpy. I could have added too much fish stock. As much as I liked it, I have to restrain myself from cooking such rich food every week. I could see my LDL levels rising with each spoonful of rice that I took. It is a pity that the nice things in life are always those that we need to avoid. Here is the modified recipe: 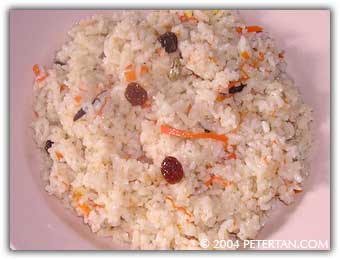 Wash the rice thoroughly. Soak it in clean water for fifteen minutes. Heat butter and olive oil in pot. Add cinnamon stick and cloves and saute until the spices’ aroma are released. Add onions and saute until fragrant. Stir in rice until it is thoroughly coated. Add fish stock, carrots, coriander, cardamom, sultanas, salt and sugar. Bring to boil while stirring constantly. When it is boiling, lower heat to simmer. Add saffron with the water it was steeped in. Transfer the broth to cook in an electric rice cooker. When it is cooked, fluff the rice with a pair of chopsticks. Serve warm. It tastes best when eaten with curry.

9 thoughts on “This is for Rosalynn”