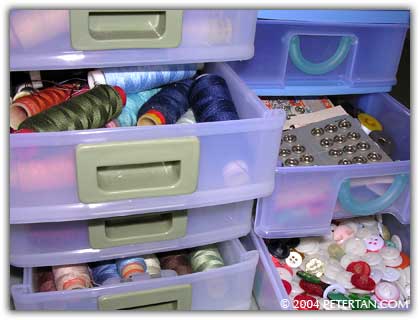 That familiar humming, that familiar sound – could it be true? My eyelids were heavy. I was somewhere between slumber and wakefulness. I strained my ears to listen. True! It was her. That unmistakable humming of no particular tune, or sometimes hymns that I did not know of until recently. This time it was not one that I knew. No doubt still as soothing.

She would set up her sewing machine just outside my room and hum while threading a needle or sewing a pyjama or stitching someone?s torn dress. She enjoyed sewing. That was evident by the way she looked after her sewing machine. She kept them free from dust and oiled all the moving parts regularly. Then there were coloured threads, bobbins, buttons, needles of various sizes and other sewing paraphernalia that she kept in little plastic drawers and biscuit boxes beside her sewing machine.

I tried to call out to her but I could not. The humming came nearer and nearer. There was a squeak. It must be my room door lever. That needed some oiling. It always made those awful sounds. I wanted to open my eyes but my eyelids were still as heavy. I could feel her massaging my feet, like she always had done. Those soft tender hands, the warmth that was so comforting; that can only be the hands of a mother. That could only be Mum.

In that sudden jolt into lucidity, in the abrupt awareness that came upon me, I called out to her. But it was all quiet ? no more humming, no more sensation of my feet being massaged. There was just the freshness of the morning breeze and the brightening of a new dawn. My heart sank. I closed my eyes to go back to sleep, hoping that it would all return again, hoping that she would return again.