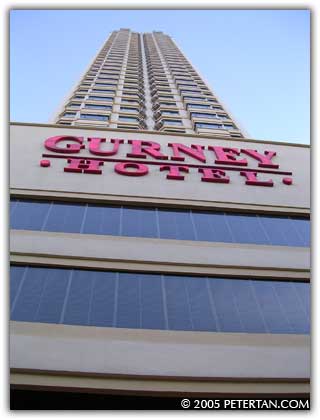 The suite at Gurney Hotel had been booked well in advance. We were apprehensive initially. The staggering number of deaths reported in Malaysia, Indonesia, Sri Lanka and India were daunting enough. We had heard and read that Gurney Drive was pounded by the tsunami. We were not sure if any life was lost but the fatality elsewhere in Penang had us worried. The thought of Penang being hit by aftershocks and another tsunami weighed heavily in our minds. Yet, we were curious, wanting to see for ourselves the real situation there. Wuan and I checked with the hotel several times and were assured that the hotel was still operating. 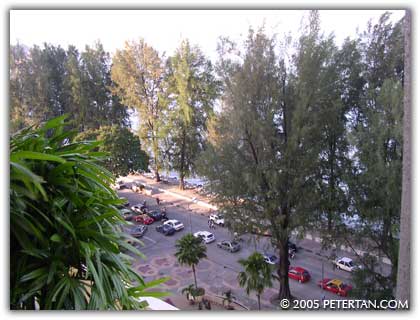 View from the hotel’s pool deck – crawling traffic below.

Like babies, we took small cautious steps when we reached the hotel with Peter’s family whom Wuan had invited to join us. We looked around. The sea was calm. The road was clean. Evening strollers wandered leisurely at the promenade. There were no hints of anything unusual except the traffic. Crawling vehicles snaked the length of the road as far as our eyes could see. We guessed a lot of them came to see the gravity of damage the tsunami wreaked. We Malaysians are a curious lot. We slow down to watch motor accidents but seldom stopped to offer help. And now we visit disaster areas for the same purpose. 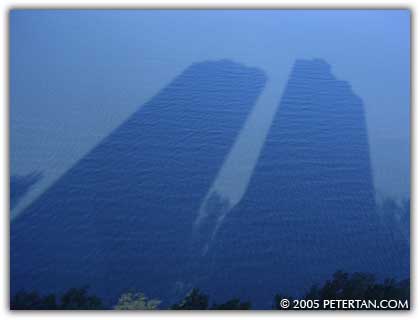 Shadow of the hotel against the calm sea.

The view from the hotel’s pool deck on the seventh floor was breathtaking. Small boats bobbed in the distance. Tankers and cargo ships anchored in the middle of the channel. The sun was setting. Birds were returning to roost. The strong cool breeze that was blowing in ruffled my hair. Indeed, it was the Gurney Drive I had always known. I had come to get away from the grim footages of destruction and death continuously being broadcasted by CNN. Still, I could not shake off that feeling of gloom and doom. Those images distressed me greatly, as was the death toll that continued to rise by the hour. We retired early that evening, exhausted by the macabre events of the past two days.