“Do you want to bring along some durians for Wuan?” Peter asked.

“Are you sure they will allow that in the plane?”

He assured me that if the containers were sealed properly, the malodor would not be obvious. I happily told Wuan about it. Elaine got two rather good durians from Balik Pulau the evening before I was to leave. One was ang heh. I am not sure about the other. They smelt good and looked very tempting. 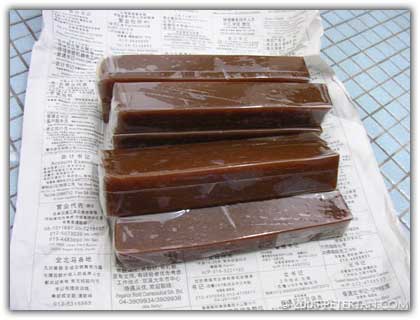 That Saturday morning before fetching me to the airport, Peter used masking tape to seal the two plastic ice cream boxes filled with the durians. The boxes were then sealed again in 2 layers of plastic bags. Both boxes were then packed together with my clothes and 4 katis of dodol. Those dodols smelt even better as they were made just a couple of days before.

When the duffel bag went through the luggage scanning machine at the airport, the durians appeared in the monitor screen. The security officer rescanned it again to see what it really was. He asked me to unzip the bag and lo and behold the pungence was apparent. He asked if I had friends who were there to see me off so that I could leave the durians with them as they were not allowed into the plane. I looked around but Peter was nowhere in sight.

Knowing that I could not possibly take the durians with me, I surrendered the two boxes to the security officer. Next the dodol was scanned again. The aroma was strong too but not as distinct as the pungency of the durians. It was allowed and fortunate too because those cost a lot more.

At the check-in counter, I specifically requested to be allowed to change chairs just before boarding and that I wanted it immediately after I leave the plane. At the boarding gate, my wheelchair was tagged to indicate that it was to be delivered to me immediately just outside the aircraft upon arrival. 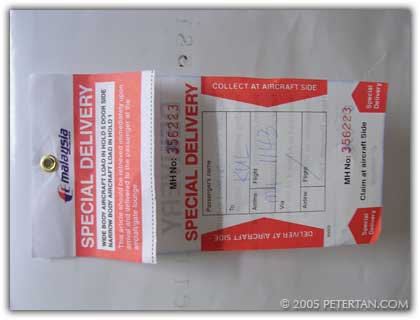 My flight was delayed for thirty minutes. I had nothing much to do and whiled my time away taking photos. Boarding was at 1125am. I looked at my watch. It was only 1055am. I decided to empty my bladder just in case the flight was delayed much longer. It would be embarrassing should my diaper spring a leak while I was still in the plane. I informed the boarding counter and went looking for a toilet.

After finished catheterising, I tried to open the toilet door. The knob refused to turn. Thoughts of being trapped in the airport toilet and missing my plane crossed my mind. That would have been a pathetic but amusing story to tell later. I knocked on the door and called out for help. That was the first time in my disabled life that I had to shout for help.

The cleaner must have heard me calling. He tried to open from outside but that too proved futile. I was asked to wait while he went off to get the keys. I attempted to turn the knob several times and finally succeeded. That was a great relief. I promised myself that I will never lock a toilet door again. Never mind if I was caught with my pants down. That would have been less embarrassing than getting locked in a toilet.

The doors for a disabled person’s toilet should have been installed with a lever instead of a knob. People with poor hand dexterity like me have great difficulty in gripping a round knob and turning it. Moreover it would have been more convenient if a sliding door was installed in place of a hinged door that opens inward like the one I was trapped in. In confined spaces it is difficult to maneuver a wheelchair to open such doors. 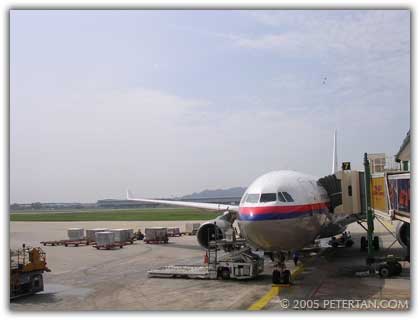 The Airbus 330 was more spacious than the Boeing 737 that I used to take. I had specifically asked for a window seat. It was a little hassle to move from the aisle chair to the inner seat. That was worth the effort though. The view outside was breathtaking. Although the flight was delayed by thirty minutes, the plane arrived at KLIA just twelve minutes later than scheduled.

As usual, I was the first to board and the last to disembark. An aisle chair was brought in to help me out about ten minutes after the last passenger had walked off the plane. The crews were very friendly and helpful. I transferred to the chair with little effort.

Malaysia Airlines is the only airline I have used for all my solitary trips to Kuala Lumpur. I have no complaints. My journeys have always been uneventful because their staff is efficient in handling disabled passengers. They even have the mind to provide an escort for me from the plane as I disembarked right up to the ERL Station for me to catch the train to Kuala Lumpur.

However this time, my wheelchair came out from the cargo hold damaged. At first, I thought it was only the right front castor that was damaged. The escort assigned to me had great difficulty in pushing the chair forward in a straight path. The chair kept turning to the right. I reported the damage and asked the staff at the Lost and Found Office if they could loan me a wheelchair. There was no way my chair could take me any further. He said they had none and advised that I send it for repairs and send the bill to claim from Malaysia Airlines.

I asked him what I was supposed to do in the meantime as that damage had severely impaired my mobility. He said there is nothing they could do. That attitude is not acceptable. They of course do have wheelchairs in the airport but he refused to do more than to filing my report and sending me off on my way again. That was akin to asking a man with two fractured legs, caused by the negligence of Malaysia Airlines, to go seek medical attention by himself and claim the medical expenses from them afterwards.

While I was in the train, I called up my friend to get a number for the shop selling wheelchairs in Kuala Lumpur. I did not know how severe the damage was until after the ERL porter handed me to Wuan at Sentral Station. I tried to propel the chair by myself but could not. That got me worried. I called the number that my friend gave me and spoke to Mr. Lee of Lee Prosthetic & Orthotic Centre at Taman Midah. He specialises in rehabilitative devices. After listening to my plight, he advised me to see him immediately to get the problem rectified. Wuan and I had a quick lunch first at Strudels. 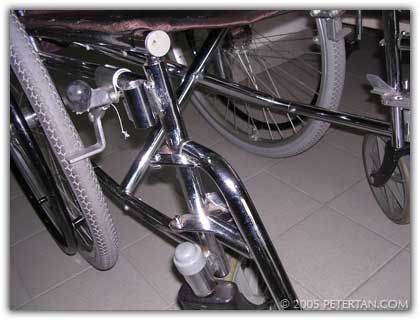 Mr. Lee took one look at the wheelchair and suggested that I get a new one. The damage was more severe than I had expected. It was not the right front castor that was damaged. Rather, the frame was bent. Repairing it would take weeks and then only a temporary remedy because the sturdiness of the frame was already hopelessly compromised.

I called the Lost and Found Office where my report was filed to check whether they will cover the cost of replacing my wheelchair. The person who answered the call gave me vague answers and asked me to call the Baggage Claim Unit which I had done just before calling them but the phone went unanswered for a long time.

A lightweight wheelchair like the one I was using would cost RM1000 upwards. I was worried that Malaysia Airlines would not honour the claim. After kicking up a fuss, she verbally agreed that I could replace the chair and send the bill to Malaysia Airlines.

I felt slightly assured but still not fully convinced. I had to get a replacement regardless. There was no way I could use that damaged chair anymore. Mr. Lee gave me a good discount on the one that was suitable for me. I wonder what would have happened if Wuan was not there to help me around and paid for the replacement first. Worse was if Mr. Lee’s shop was closed for the day. What would physically disabled foreign travelers do if they were caught in similar predicaments as mine?

This incident had severely dented the image of golden service that I had come to expect from Malaysia Airlines. Leaving a disabled passenger almost stranded at the airport when they were at fault was simply disgraceful. The very least they could have done was to provide a wheelchair until I could get the damaged repaired or the chair replaced.

This trip had been a stressful one. The misadventures this time around have revealed to me the many problems that a disabled person travelling alone could encounter. The doubts will definitely remain the next time I travel alone again, no thanks to MAS’ poor handling of this situation.

12 thoughts on “A Series of Unfortunate Events”