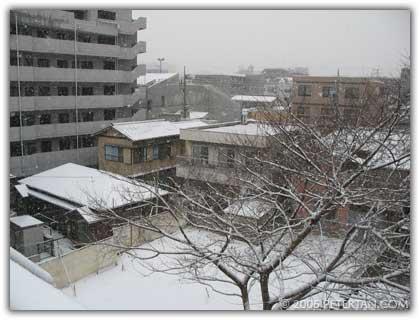 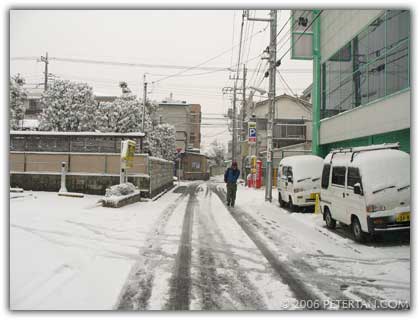 Despite the heavy snow, Ai-chan came to inform us of the day’s programme in her wheelchair all the way from her home thirty minutes away. An accessible van would be picking us at 10.00am, then pick Siew Chin and Kim up from the hotel. That particular van could accommodate three wheelchairs instead of the usual two that we used to commute from the Hino Experiment Room to Human Care Association at Hachioji. 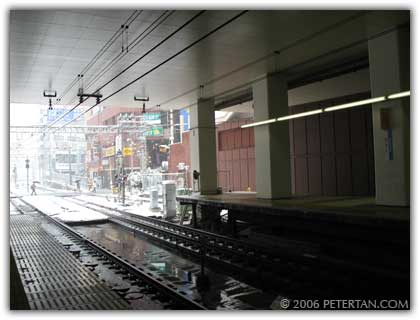 When we reached the Odakyu Station at Machida, Ai-Chan and Hippie were already waiting for us. Ai-chan had traversed through the snow from the Machida Human Network office to the station in her wheelchair. Simply amazing!!! We made our way to the train platform to catch a train to Shinjuku. 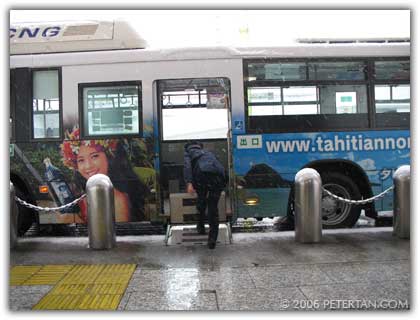 The trip from Machida to Shinjuku took forty five minutes. First programme at Shinjuku was to take a trip in a non-step bus to the Tokyo Metropolitan Government Building. The height of the bus could be lowered or raised. There is a separate door for wheelchair access. The bus driver pulled out a ramp that was kept under the floor. Getting into it was easy. The inside of the bus had space wide enough to accommodate several wheelchairs. One trip costs Y180 irrespective of distance. 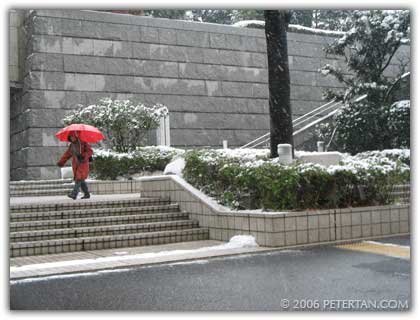 We got off a short distance away from where we boarded. Again. Ai-chan and Hippie was waiting for us at the bus stop, they having traversed quite a distance in the snow to reach the bus stop. That was just outside the Tokyo Metropolitan Government Building.

Snow flakes that landed on my knapsack, camera and sweater melted and made everything else wet. Still, I persisted in not wearing gloves because I wanted to shoot images of pure whiteness that looked so virginal. There was a time when I could not feel my hands. They were almost frozen numb. When I wanted to press on the shutter button, my finger tip could not feel a thing. My camera froze several times, too.

Ai-chan had planned to take us for lunch up the observation deck of the building. On normal days, the view of Shinjuku and the rest of Tokyo would be clearly visible. However on that morning, snow and fog obscured everything. The restaurant served only Italian food such as pasta and sandwiches only – not delicious by any standard and expensive too. 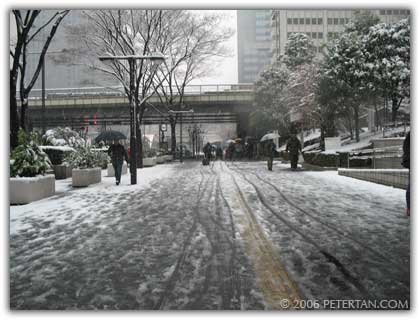 The heavy snow spoilt Ai-chan’s programme for us. The ride on the Oedo Subway Line and sightseeing of Asakusa had to be cancelled. Moreover, we had to head back to Hino fast as there was a possibility that the train we were to return on could be stopped because of the snow. Before we left, Ai-Chan and Hippie took us to the welfare shop to look at some assistive aids. I was interested in the chopstick that Hippie had used during the welcoming party the evening before. 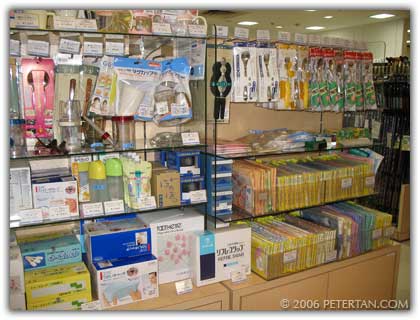 At the shop that was part of the Odakyu Department Stores, there was a range of assistive devices for the elderly and those with poor motor function. I bought a pair of chopsticks, a bottle opener and a heat/cold pack. I was also interested in a gel cushion but it costs more than Y41,000. I may also get a pair of gloves for pushing the wheelchair. Many of the items available at the shop are difficult to find in Malaysia. 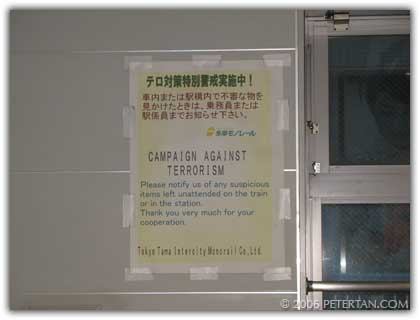 We said our good byes to Ai-chan and Hippie at the train station. It was freezing cold. The train back to Tachikawa was packed to the brim. From there, we took another train to Takahatafudo and changed to the monorail to Manganji. It had been a long day, very interesting nonetheless. Snow, I do not want to see any for a long time to come. That whole day of being in the cold was sufficient to last a long time.