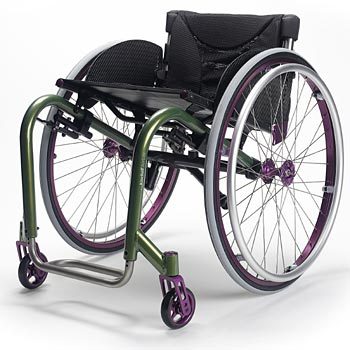 A few days after I posted My Dream Ride in September I received an email from Grace. She is a Malaysian who is currently residing and working in Texas, USA. She offered to pay for the Kuschall Airlite Pro. The Airlite Pro is to wheelchairs what Nike Air Zoom Moire is to sneakers. It can be customised to fit my body perfectly. I had to turn down Grace’s generous offer as I felt that it was too expensive a gift to receive. Besides, I believed I could work to earn enough to pay for it sooner or later.

In December 2006, the distributor for Kuschall in USA announced that they would no longer carry that line of wheelchairs in the country anymore. The news was disappointing as it was no longer being offered by online stores in the USA too. However, Kuschall announced in January 22 that another company has been appointed to distribute the brand in the USA again. Just in case the Airlite Pro will not be offered via the online stores, I am prepared to trade it for another equally exciting chair – the Invacare Top End Crossfire Titanium. This is another wheelchair that sports the minimalist design much like the Airlite Pro. Configured to my specifications, both will cost approximately USD3,000 respectively.

The income from selling advertisement space in my blog has been increasing steadily for the past few months. To realise the dream of owning either of the swanky rides, I have decided to appropriate the money earned from that into a fund for purchasing one of the wheelchairs. At the same time, I will continue to blog as I have always been doing. Advertisements in this blog will be kept to a minimum and inconspicuous. Hopefully, I will able to ride in one before the year is up.

3 thoughts on “My Dream Ride – Making It A Reality”