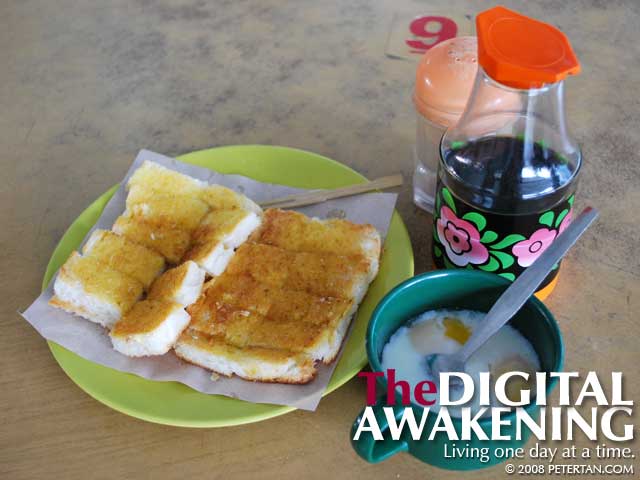 I am not a breakfast person. I know, I know. Breakfast is the most important meal of the day. Once upon a time, it was the first meal until I began to get stomach discomfort right after having it. This went one for several weeks. I have skipped breakfast since. I never found out the cause of the problem though.

My cousin Peter introduced me to this quaint little kopitiam called Joo Leong Cafe at Sungai Tiram on the way to the Penang International Airport. It serves seafood porridge and noodle in the evening. They had fish maw which is one of my favourite. I usually had it with sliced fish in piping hot porridge. There were also several stalls selling jiu hu eng chai (cuttle fish and kangkung in thick sauce), yim kuk kai (salt-baked chicken) and satay.

Other than porridge and noodles, they also serve toasts. I prefer thick toasts over regular sliced ones. Joo Leong uses Hailam bread which is bread with its crust removed. The bread is toasted and generously slathered with butter and sprinkled with granulated sugar. Toasts and porridge is an odd combination especially for dinner. I was soon initiated into it and could not stop eating the first time I had it.

For breakfast, the toasts are served with half-boiled eggs. The taste of buttered toasts dipped in the eggs is simply heavenly. This is one breakfast that is worth having a stomach upset over. Wuan likes the packed nasi lemak and fried noodles too. Each time we are in Penang, we would try to make time to drop in either for breakfast or dinner. I am already salivating at the thought of sinking my teeth into the toasts when we get to Penang next week.