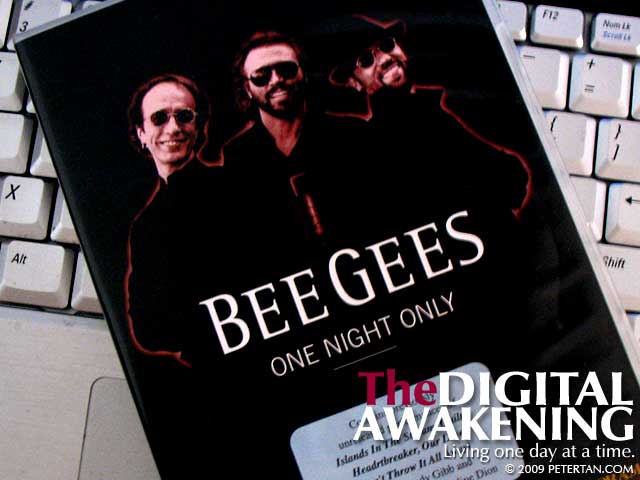 If Mum were alive, she would turn 84 today. I do miss her a lot still. One of the odd things about her that struck me today was her fondness for Bee Gees. It all happened one day in the year 2000 when I played the Bee Gees One Night Only VCD. It was after lunch. She sat down and watched together with me.

Who would have expected my 75 year old mother becoming a fan of Bee Gees then? She did not complete her primary school education. She did not speak English and understood only basic greetings. She sat there watching. No words were exchanged between us. I could see that she thoroughly enjoyed the concert.

After lunch a few months later, she asked me to play the VCD again.

Another few months after that, she asked me to play the disc again. All in, we must have watched the show together at least five times. I am a big fan of Bee Gees too. I used to play Words, I Started A Joke, I O I O, Massachusetts and Too Much Heaven on the guitar in my teenage years. My all-time favourite song is definitely How Deep Is Your Love.

When I read the news about Maurice’s death, I told her that the guy with the hat had passed away. Maurice wore a hat throughout the entire concert. I played the VCD and we watched together, in silence. It was a wonder that we never got bored watching. Although Mum could not understand a word in the lyrics, she must have enjoyed Barry’s falsetto voice and the music of the group.

On one of the last few days of Mum’s life, when she had become unresponsive, I moved the hifi set to her room and played the disc – just the audio – and sat there listening with her. For an hour or so, I stopped grieving. It was as if we were watching the show like how we used to.

One thought on “Bee Gees On Mum’s Birthday”