It is a bad omen to be scolded on the first day of the Chinese New Year. That was exactly what one waitress at PappaRich got from me although I had tried very hard to restrain myself from doing so. Papparich is a chain of kopitiam-style eateries that serve toasts, coffee, other beverages and a wide range of popular hawker fare.

Wuan and I had eaten at the PappaRich outlets at Shamelin Square and The Gardens Mall at Mid Valley City. We liked the steamed bread with butter and kaya. The bread was soft and the kaya had a nice aroma that we both agreed was good. We were therefore pleasantly surprised and delighted at the same time to find out that Papparich has an outlet at the newly opened De Garden mall in Ipoh. De Garden is right beside Courts Mammoth and opposite Kinta City Shopping Centre.

We took her parents there for dinner on the first day of the Chinese New Year. Father in law ordered koay teow soup with chicken and iced white coffee. Mother in law wanted to try the curry laksa and apple juice to go with it. After they placed the orders, Wuan and I went to the washroom. When we got back, their drinks were already served. Wuan and I went through the menu as we had not ordered yet. 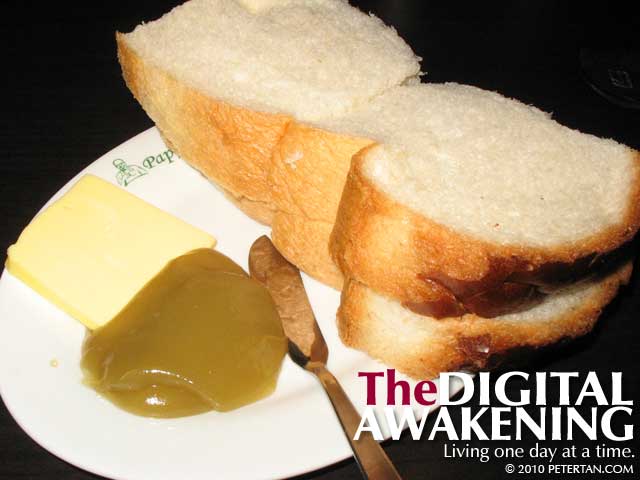 I was famished and thirsty. I ordered fried rice with fried egg, steamed vegetarian pau and watermelon juice. Wuan preferred the dry curry mee with foo chok and hot lime barley. We wanted her parents to try steamed bread with butter and kaya, and ordered that as well. The restaurant was about three quarters full but the waitress was slow in coming to pick up the second order form from us.

After waiting for fifteen minutes, neither the food from the first order nor our drinks were served yet. We flagged down a waiter and enquired about our food. He nodded and walked off. A short while later, another waiter came to ask if we had ordered our food. We told him we had but it has been a while since and we were still waiting. He said it was coming without checking with the kitchen. He had actually wanted to take the menus from us to serve another table.

Another fifteen minutes passed. I was getting very thirsty and hungry and restless. We started to grumble. I caught the same waitress who took both our orders and asked her why it was taking so long. “A hungry man is an angry man,” I told her in jest and asked her to please check our order. She did not get back to us after that and continued to serve other patrons.

We all waited for another ten minutes. My stomach was already rumbling. As the same waitress walked pass, I told her if the food were not served in ten minutes, we would leave. She mumbled something and walked off. The last straw was when the couple from the next table who arrived much later than us were tucking away on their food. I decided not to wait anymore and asked for the bill from another waitress. 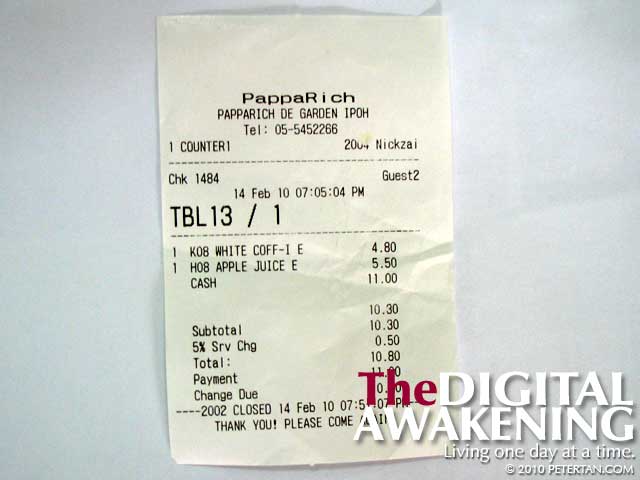 I told her I would never eat there again and will tell my friends not to eat there also. All she could manage was to keep saying sorry. Wuan told her that we never had problems with the other PappaRich outlets in Kuala Lumpur. In the end, we paid for the two drinks that Wuan’s parents had and walked off to eat at the restaurant just beside it called the T.O.S (Taste of South). Service there was prompt. Our orders were served within fifteen minutes. Most importantly, the service staff were friendly and polite.

PappaRich De Garden Ipoh was a great disappointment. I would not have been so flustered had the waitress taken the trouble to check our orders with the kitchen, and if they were not in the queue for whatever reason, get the kitchen to prepare our food immediately. But no, this particular waitress and the others never bothered to rectify the situation despite several enquiries from us.

Having worked as a waiter in a 5-star hotel before, I can relate to what life as a service staff is like. For me to scold the waitress at PappaRich De Garden like that tells a lot about the level of service. The greatest mistake a restaurant can make is to allow patrons walk away hungry and angry. That is a surefire way to lose them permanently. PappaRich De Garden Ipoh certainly has lost me on that account.