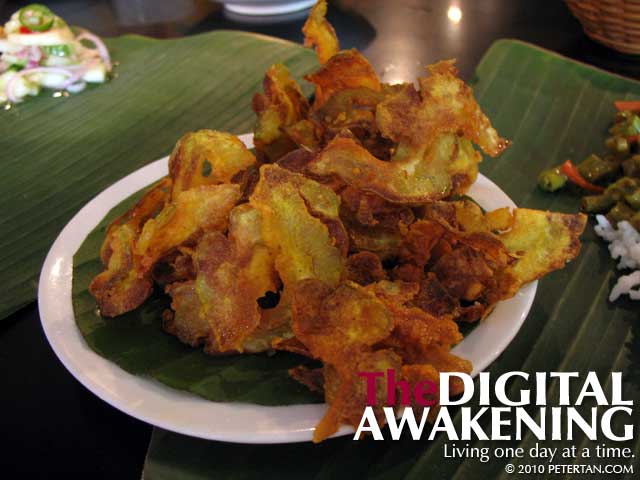 How can something bitter be delicious? That was what I used to think about bitter gourd until I was initiated into eating bitter gourd omelette many years ago. I then progressed to drinking bitter gourd and pork ribs soup. That was less palatable but Mum said that it was cooling for the body. I used to run around under the sun and that was supposed to help.

Much later when Wuan and I were dating, we used to share a cup of bitter gourd and green apple juice whenever we were at Jusco Supermarket. This combination made the drink bitter and sour at the same time. Still we drank like it was nectar from heaven as bitter gourd was believed to be detoxifying as well. I have also grown to love bitter gourd yong tau foo, preferably deep fried and served with some gravy instead of in soup.

The one dish that keeps me wanting more is the deep fried bitter gourd from Passions of Kerala in Penang. It was love at first bite for me. Whenever we ate there, it was a must have dish. The batter that coated the thinly sliced bitter gourd gave it crispness and aroma. It was delicious whether eaten as is or with banana leaf rice. I have not found another place that makes it as nice as at Passions of Kerala. No prize for guessing correctly where I will head to the next time I am in Penang. Bitter can be delicious. You better believe it!