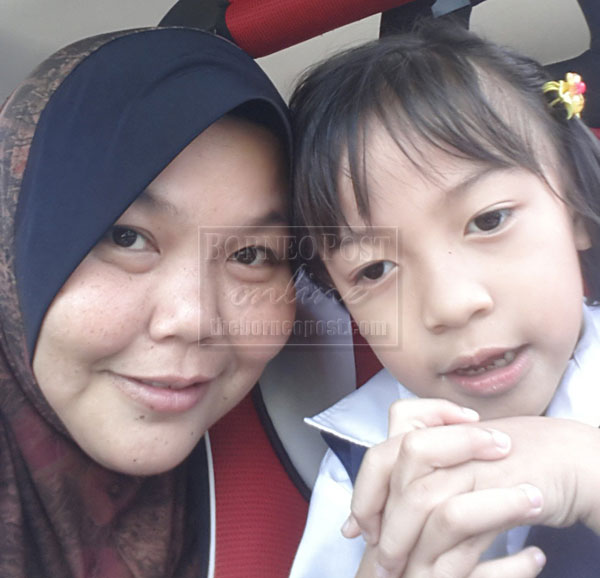 STRONG BOND: Rafidah with her daughter Janna, who has cerebral palsy.

DURING the third trimester of her pregnancy, Rafidah Rafizah Ahmad was told she carried twins but that one had died.

“I was heartbroken,” Rafidah said of the moment she heard about her unborn baby’s condition.

“It happened so quickly, one bad news after another. First, I got to know that I had twins. Then, I was informed that my other surviving baby has a heart problem. Doctors told me that she may not even survive. I just bought new baby clothes and washed the old ones.”

Izdihar Janna was born prematurely at 33 weeks. Contrary to the doctor’s prognosis, Janna survived. When she was six months old, Rafidah noticed that she was behind in developmental milestones of a child of similar age. She put her little daughter through therapy to improve her functional skills.

It was only when Janna turned four that the doctor specifically diagnosed her as having cerebral palsy, a condition that affects the way the brain controls movement and posture. At that time, Rafidah was working as an engineer while her husband was a university lecturer.

They were lucky that they found a reliable babysitter who took care of Janna and her brother who is four years older. Rafidah and her husband’s flexible working hours also allowed them to arrange Janna’s therapy appointments so that both parents could go together.

When her husband was given a scholarship to further his studies in New Zealand in 2008, Rafidah was reluctant to tender her resignation as a promotion was forthcoming.

However, she also realised that New Zealand provided opportunities for Janna to get a better education and treatment. She felt torn as it was a difficult choice to make. Unfortunately, Janna was denied a visa due to her condition.

By then, Rafidah and her husband believed that they could afford to live with a single income. She got her promotion anyway, to become a full-time home manager, and the best of all was that she could devote more time on Janna’s schooling and treatments.

Rafidah shared what a typical day is like for Janna, now that she has begun schooling.

“Normally, I’ll prepare food for her, get her ready and drive her to school. I’ll go back home after that to do some household chores and cook, and pick her up again at noon.”

After school, they will go straight to physical and occupational therapy sessions, usually two to three times per week, sometimes more. When Janna does not have any appointment, Rafidah will help her with home therapy and school work.

According to Rafidah, these therapies and unconventional treatments are important to minimise the effects of cerebral palsy on Janna and also to teach her to perform her activities of daily living.

Although she spends a lot of time with Janna, Rafidah does not think that she is giving her daughter any special treatment.

“I always ensure that I attend to my son’s needs as well and fortunately, he does not mind spending more time with my husband. We treat both our children equally and as typically as possible. They both have their fair share of getting punishments and rewards based on their acts.”

As a parent of a child with cerebral palsy, Rafidah discovered that information on this topic relevant to the Malaysian context is scarce.

Together with other parents she met online, she created a Facebook group called Malaysian Advocates for Cerebral Palsy (MyCP) in June last year.

It began with parents of children with cerebral palsy but quickly expanded to a network that included other advocates such as doctors, therapists, educators and activists. MyCP was successfully registered as a society in December and has 430 members to date.

When asked what she had to give up to provide a better life for Janna, Rafidah’s response was, ‘My career’, but added that it was no longer something she regretted giving up.

She is also in the process of setting up a trust fund to make sure that her daughter’s financial needs in the future are secure.

Rafidah has some advice for parents in similar situations: “Taking care of a special needs child can be draining. We are also normal persons and it is all right to cry and to feel down once in a while as long as we do not let our emotions cloud our judgement and affect our lives. Join support groups to share experience and information and improve your relationship with God.”

She is of the opinion that the Welfare Department should provide support to families with disabled children regardless of the household income.
Rehabilitation equipment and monthly expenditure for medication, special supplements and essential disposable items are very expensive and a drain on the families’ finances.

At the same time, she emphasised that rehabilitation and education services should be made readily available and easily accessible with a good transportation system.

Rafidah is a mother par excellence. She gave up a promising career to spend long hours ensuring that Janna gets the best treatment, education and everything else.

A mother’s work is never done but like she puts it, “It is all worth it.”