A friend like no other
by Peter Tan. Posted on September 14, 2013, Saturday 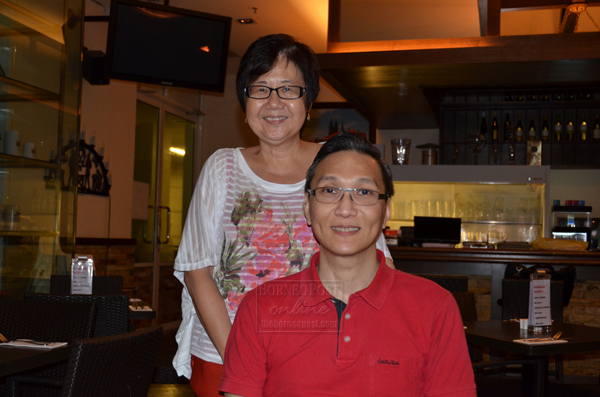 SPECIAL RELATIONSHIP: Peter and Jenny during their recent meeting.

THE first time I met Jenny Tan, I was garbed in a white hospital-style cotton blouse and sarong although I was already discharged from the hospital a few months earlier. I was referred to her for physiotherapy.

My mother had made the blouse because it was easier to put it on me that way. I was still very much bedridden then. Needless to say, that first impression got stuck in Jenny’s mind since that fateful day 28 years ago. She would always refer to me as a cotton wool child whenever we reminisced about that day.

After that first meeting, Jenny worked with me on my rehabilitation for the next five years. She pushed me to my limits and made me exercise harder than I ever knew I possibly could. She made me stand. She made me walk with a pair of crutches while she and her assistant propped me up. I must have been the patient that she spent the most effort and time on.

There was a period when I would feign a headache and exhaustion to skip physiotherapy. I dreaded those sessions. She would ask me if I exercised at home and I would stupidly admit that I did not which would result in a ticking-off from her.

I caught up with her on my trip back to Penang recently. We exchanged stories about ourselves over a scrumptious spread of Hainanese cuisine. It is difficult to find food with such authentic flavours where I am based now and she was more than happy to indulge my cravings for it.

Over a cup of latte after dinner, I asked her a question I had been meaning to ask for a long time.

“You knew from the beginning that the prognosis was bad, that there was very little chance of me ever walking again. Why did you push me that hard anyway?”

“We have seen miracles happen. There have been cases of recovery,” she began without needing to ponder over it.

“I had to push you to the maximum. I had to give you a chance. You were living on hopes and miracles. You were doing all those exercises with the hope of recovering.”

I told her that I eventually realised that no amount of intensive rehabilitation could make me walk again and that I accepted it. Still, I saw myself as helpless for not being able to walk.

I was too engrossed in recovering fully to acknowledge the improvement to my condition but she rightfully pointed out one fact that I could not deny.

“By the time you accepted the condition, you had already gotten stronger. You had already maximised what you had left. Anyway, it still was rehabilitation or else you would not even be driving a car now.”

I am forever grateful to her for playing an integral part in my rehabilitation and recovery during those early years. I would not have known how much I could achieve had she not relentlessly pushed me to my limits and beyond. It was she who first unravelled the confusion in my life after the accident.

“Things happen for a reason,” she rationalised while we were chatting about my condition one day.

“You could have died or your life could have turned out for the worse.”

Those words could not be truer. It took me a while to comprehend what they meant though. I could have met with a more serious mishap or died doing the silly and dangerous things I was doing then.

The tragedy slowed me down and made me see the world with a different outlook. I have learnt to be thankful for little blessings.

In some strange ways, this twist of fate made me a better person by allowing me to appreciate the people around me more.

Jenny is more than a physiotherapist to me. Our relationship gradually evolved over the years. Long after I stopped going to her for rehabilitation, she would drop by the house occasionally to check on me. She became a good family friend.

She has seen me through some rough patches. She was always there to lend a hand whenever I needed it.

During the final weeks of my mother’s illness, when everything was topsy turvy, she was a constant source of support and consolation.

Jenny started her career in government general hospitals in Perlis and Penang. She then served in two private hospitals and now runs her own private practice.

Some of her existing patients are from as far back as her stints in the general hospitals. That is how much confidence they have in her.

Her success as a physiotherapist is also reflected in the list of her patients which include former Chief Ministers and illustrious personalities in Malaysian society. This, she said, has put her life in a better perspective.

Jenny’s zest for life has always been infectious. Being around her has never failed to give me a positive buzz. It was no different this time.

It is not even far-fetched to say that she does not seem to have aged. She is still as energetic now as she was on the first day we met. Her secret to that perhaps was in what she shared in between sips of coffee.

“You cannot take any job in the medical profession lightly. You have to like people and genuinely enjoy making people happy and comfortable. I love people and take life as an ongoing experience so I can relate to it as I move along.”

She truly loves her job and cares for the patients under her care. I can attest to that. That is also the reason her patients keep going back to her whenever they need treatment. To those of us who have been touched by her, she is God-sent.

Before we parted ways after a wonderful evening of delicious food and rekindling of old friendship, we promised to catch up again the next time I am in Penang. That was a fruitful trip indeed.