A matter of perspective
by Peter Tan. Posted on February 8, 2014, Saturday 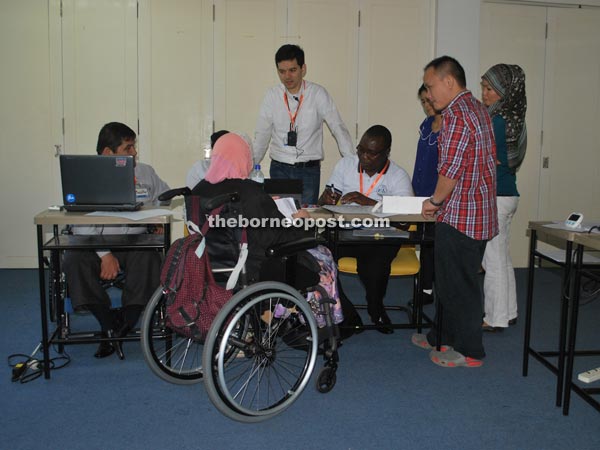 Participants and trainers are seen during a session.

MALAYSIA is the unlikely hub for the rapid growth of the Training of Trainers on Disability Equality Training (TOT DET) course outside of the United Kingdom where it originated. I say ‘unlikely’ because Malaysia is not a model of inclusiveness when it comes to matters regarding disability.

Although we have the Persons with Disabilities Act 2008 and have ratified the Convention on the Rights of Persons with Disabilities, attitudinal and environmental barriers are still prevalent. These barriers prevent disabled people from meaningful participation in society; all the more reason why DET is needed to change prejudiced mindsets and break disabling barriers in this country.

I took a hiatus from writing for this column to participate in a national-level TOT DET course held in Kuala Lumpur in January. It was organised by the Japan International Cooperation Agency (Jica) and the Welfare Department.

There were 11 trainees altogether; seven from Malaysia and two each from Rwanda and Uzbekistan. The foreign participants had requested to be included in the training as they were very keen on implementing DET in their own countries.

During the 10-day course spread over two weeks, the trainees learnt to become effective DET trainers by gaining comprehensive understanding of the Social Model of Disability. They also learnt delivery skills by practising facilitation and presentation techniques. In turn, they are expected to implement DET as disability education for the public and as empowerment for other disabled people upon completion of the course.

Three senior trainers and I worked closely together by taking turns to be facilitators and co-facilitators under the watchful guidance of Dr Kenji Kuno, who developed the modules we are currently using. He is the senior advisor on Social Security (Disability) for Jica. This course was an important training for us as well in the run up to the international level TOT DET that will be held in Malaysia next year.

I have attended several other training sessions that stretched over two to three weeks but none were as tough as this. Likewise, my fellow facilitators were thoroughly exhausted by the third day of training. I had barely three hours of sleep each night as I prepared for the sessions I was responsible for. Teaching was tough but ensuring that the trainees really learnt was even tougher. That was the part that wore us out most.

There were moments when my body and mind felt like giving up. This was the same sentiment the other facilitators experienced. We were pushed to our limits. In the end, we were glad we hung on to conclude the course as we were able to learn the finer points of DET and the methods to deliver it even more effectively, be it as trainers or as facilitators.

DET was developed in the 1980s to address the need to provide information on disability away from the traditional perspective that impairments are the reason for exclusion in all aspects. It utilises the Social Model of Disability as a heuristic process to identify the locations that cause participation restriction and promote proactive actions to solve them.

The Social Model was developed from principles instituted by the Union of the Physically Impaired Against Segregation (Upias), an organisation established in 1972 to advance disability rights in the United Kingdom. In its founding statement, Upias asserts that disability is imposed on top of impairments by systemic barriers that unnecessarily isolate and exclude people from full participation in society.

Dr Kuno introduced DET to Malaysia in 2005 as part of a three-year project on Capacity Building on Social Welfare Services for Disabled People. This project was jointly implemented by Jica and the Welfare Department. He was the chief advisor for the project in Malaysia then.

In its subsequent incarnations under Phase I and II of the Project to Support Participation of Persons with Disabilities and other Jica projects on disability worldwide, 192 people from 28 countries across the Asia Pacific, Africa and Latin America successfully completed the course to become DET trainers and members of DET Forum, a platform for networking and sharing of resources between trainers.

There are currently 37 DET trainers in Malaysia. Out of this number, only a handful are actively working as trainers. I was made to understand that the Welfare Department has plans to organise the TOT DET course on annual basis to increase the pool of trainers. This can only be good news as more trainers translates into more opportunities to reach out to society seeing that demand for DET workshops have been increasing steadily of late.

At the moment, government agencies, institutions of higher learning and statutory bodies are the mainstay of DET workshops. We are looking into expanding to more government bodies and private sector organisations seeking to create an inclusive environment for their workforce and clients.

DET is not the panacea to solve all issues on disability. However, it is an effective educational tool that reframes disability into a social perspective instead of focusing it on the individual. It complements other advocacy efforts by explicating disability in a structured, logical and non-confrontational way.

Personally, having been involved in various forms of advocacy activities on disability rights for the past nine years, I am truly convinced that DET can indeed effect change if implemented correctly, not only in society but a change of paradigm in the way disabled people view themselves and their impairments in relation to society.

Readers can find out more about DET at www.detforum.com.

Comments can reach the writer via columnists@theborneopost.