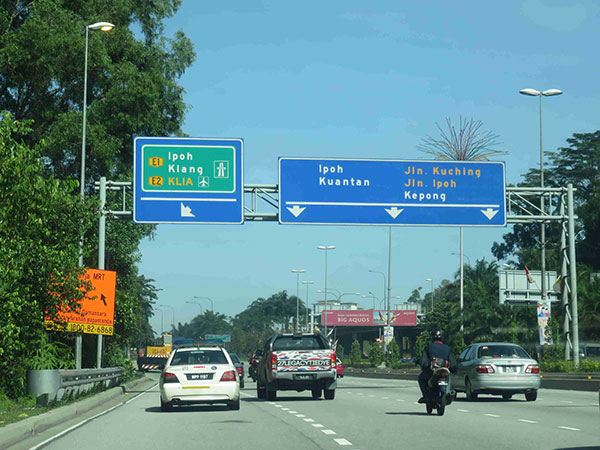 HAVE you driven around in an unfamiliar area, depending on the road signs to lead you to your intended destination, only to find that you are hopelessly lost and totally disoriented in a strange place? Well, there is no need to be embarrassed. You are not alone.

This is not a matter of men too proud to ask for directions or women being better navigators. Women and men friends alike have had to call for directions when visiting me for the first time. My house is located between several arterial roads with heavy traffic during rush hours. There are plenty of road signs along the way but they would somehow end up a few housing estates away.

Simply put, Malaysian road signs are notorious for being unreliable. Many times I have overshot exits on the highway because there are no proper signs to forewarn of them. Other times, they were placed too close to the slip roads and by the time I saw them, it was too late to slow down to take the turn.

There were instances of overgrown trees obscuring entire signs. It also doesn’t help that we have a penchant for changing British-era road names to that of local personalities. The need to replace a road name that has been in use for half a century is beyond me. This adds to the confusion for someone who has no inkling the names have been changed.

I have been driving around the Klang Valley for the past nine years but still get lost occasionally even with the aid of a GPS navigation device or Waze. I once missed an exit and had to drive 20km to get back to the same point. Luckily for me, I still made it in time for the important appointment. Nowadays, I make it a point to leave one hour earlier for appointments at places I have never been to just in case I lose my way.

Road signs are simple but crucial for way finding, safety and to provide information about facilities and services available along the route. There is even a multilateral treaty known as the Vienna Convention on Road Signs and Signals to facilitate international uniformity of road signs, signals and symbols and road markings.

Likewise, signboards are essential in public spaces. Their importance is always overlooked. We pass by them all the time at train stations, airports and shopping malls without giving much thought about their purpose until we need to use a toilet or an escalator.

A young man approached me a few days ago while I was waiting for the lift and asked if I knew where the parking ticket machine was. My car was parked in another building. I had no idea where the machine in this particular building was located.

Trying to be helpful, and clever, I hazarded a guess and directed him to another floor where I presumed the machine was only to realise a short while later this particular car park has a manned booth at the exit. I felt guilty for sending him on a wild goose chase and went back to look for him but he was nowhere in sight.

The man’s futile search could have been avoided had the management of the car park put up signs at strategic points to inform drivers where they could pay. Little touches like this are a convenience, and can save a lot of time and legwork. This is particularly true of large buildings where amenities are spread out. The medical centre I go to for my quarterly check-up is a huge complex of many interconnected buildings. Each time I am referred to a doctor of another speciality, I would get lost in the maze of corridors looking for the clinic. The directional signs are not of much help as they point in all directions, making little sense.

Putting some thought into the design and placement of signs can ensure their usefulness. The text must be concise and easy to read from a distance. Symbols can be used in place of text but they must be universally understandable. Using fancy symbols that make no sense would serve no purpose except to confuse people who are looking for a specific facility or place.

Most importantly, signboards with information on emergency situations in buildings should be placed prominently and include formats that different disabled people can access, like Braille and audio. Exit paths for wheelchair users and people with other mobility impairments should be clearly indicated to facilitate an orderly evacuation if there is a need.

I wish the people responsible for putting up signboards, be it on roads or buildings will take more care in designing and installing them. They should put themselves in the shoes of people who depend on these signs to find where they want to go quickly and easily. If only they knew how frustrating it was for those who diligently followed the signs and ended up somewhere else.