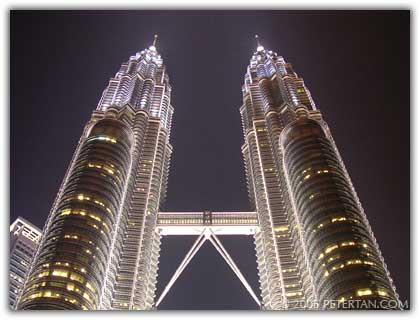 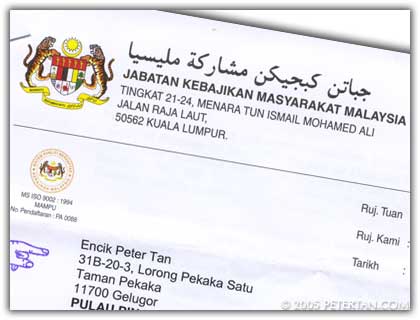 Two days ago, I received this letter from the Jabatan Kebajikan Masyarakat Malaysia. It was in reply to my letter to Dato’ Seri Shahrizat, Minister of Family, Women and Community Development, dated May 9, 2005 regarding the systematic evacuation plan for people with disabilities and the mobility impaired from high-rise buildings. All I can say is that I am disappointed with the reply. I shall reserve further comments until I have officially responded to it.

I was in the midst of writing the first paragraph of a new entry for today when the power went off at 1.25 pm. Since there was nothing much I could do without electricity, I had lunch. A short while later, a neighbour called to inform me that the elevators were not working as well. I believe some residents must be trapped in them too. This is the second time that the standby generator has failed to kick in after a power failure. The first happened in April last year. Apart from the elevators not functioning, I speculate that the pump for the wet riser supplying water to all floors for fire fighting was not working as well. The power came back on at 1.48 pm.

This is the type of building manager we have here at Taman Pekaka. Essential equipment are not maintained to keep them in running condition. Illegal structures are constructed without regard to local building laws. Vehicles are allowed to be parked haphazardly and obstruct the access of fire engines. The building manager shamelessly reserved two parking lots for himself in the common property. Our complaints were repeatedly ignored. Our lives are endangered every time there is a power failure. Yet the local authorities refuse to act against them for reasons unknown. Something is rotten in the state of Penang.