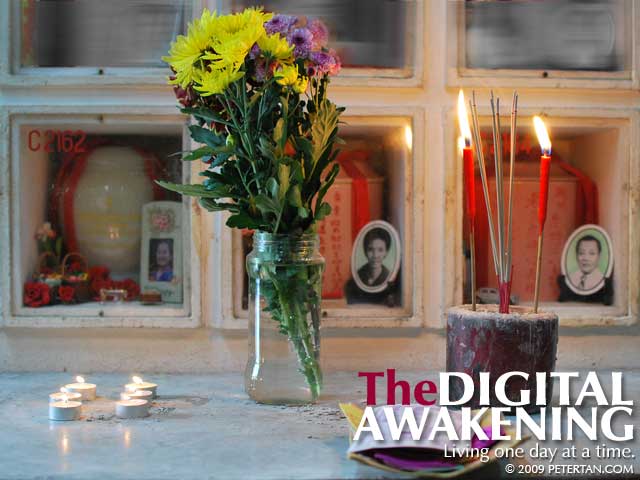 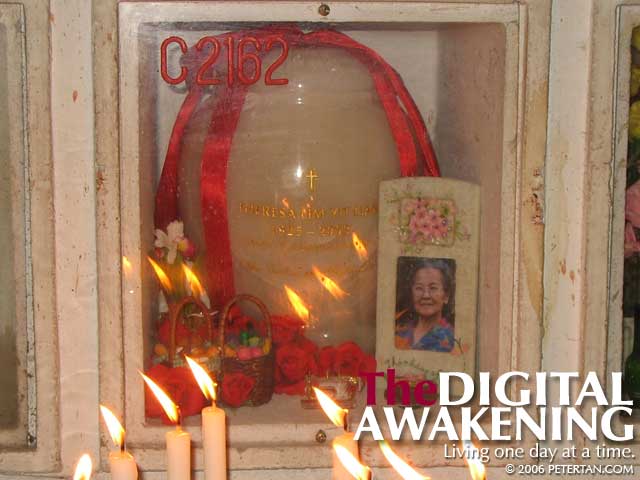 Our destination was further up the road from the Church of the Holy Name of Jesus. We had to cross a wooden bridge built over a river fed by streams from the hills surrounding Balik Pulau. Bamboo groves lined the river banks. The only audible sounds were that of the car’s engine, screeching of crickets and gurgling of the river. A constant cool wind blew in through the open window. The silence was eerie yet refreshing.

I knew where we were going. Shortly after the bridge, Dad would turn the car into a narrow earth road up a gentle slope. Like every year for as long as I could remember, he would drive Mum to light candles and lay flowers at the cemetery. Therein lie her father, her grandparents and those from extended families – many ancestors I have never met before or was too young to remember then. In my mind, they were all in black and white, just like the portraits embedded in their tombstones.

For a short period once a year, the drabness of the cemetery bloomed with vibrant colours from orchids, chrysanthemums, anthuriums, gladioluses and carnations. Little white candles that were lighted in the memory of the dearly departed flickered in the gentle breeze. It was practice that I unwittingly observed by virtue of having to tag along on those annual pilgrimages until I became paralysed. Mum continued with the tradition after that.

For the past two years I have lighted candles before the niche where Mum’s ashes were interred on All Souls’ Day and her death anniversary. Those were solemn moments. Since I am not in Penang this year, I am giving it a miss. Nevertheless, I have spent some quiet moments in reflection – thinking about life, death and where my part is in this big scheme of things – praying that I be given the opportunity to touch lives like how Mum did to countless people with her magnanimity.