No other food beats the sweet potato porridge to soothe an upset tummy. After suffering one week of discomfort, I got Wuan to cook some porridge for me to cleanse my system. She got one Japanese sweet potato and one Okinawan sweet potato when she went to the market. The Japanese variety has yellow flesh while the Okinawan variety purple. 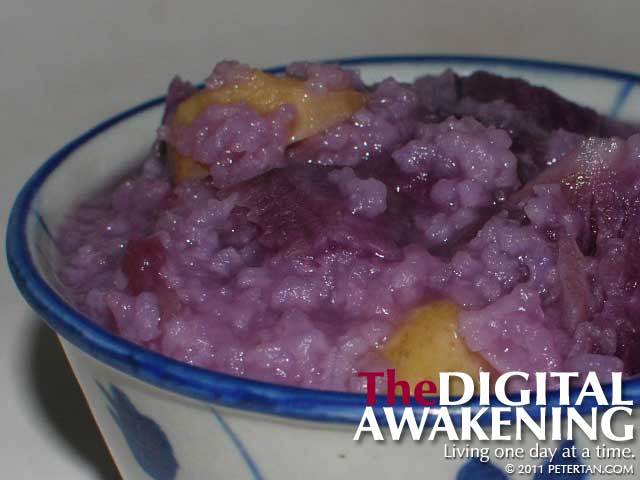 What I did not expect was the Okinawan sweet potato turning the porridge purple as well. The sight of the unusual looking porridge put me off initially. I had also half-expected it to be awful. Not wanting to let it go to waste, I decided to try a mouthful anyway. Fortunately, it tasted just like regular sweet potato porridge. That notwithstanding, I shall use only sweet potatoes that do not change the colour of the porridge from now on. 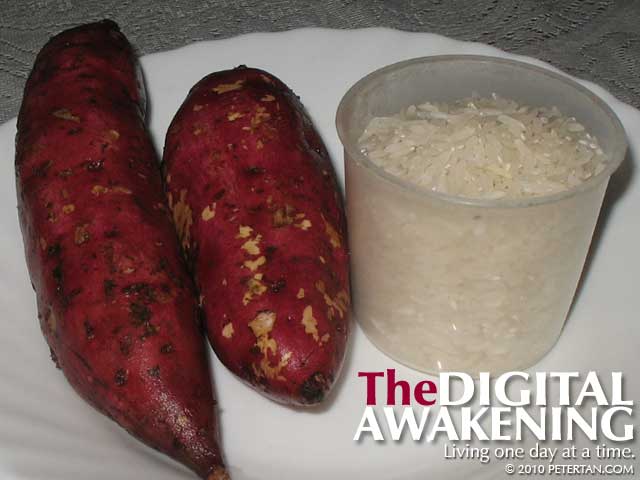 Sweet potato rice porridge is another easy-to-cook meal. It is light on the tummy. When I was a kid, Mum would cook this porridge for me if my body gets heaty. The symptoms of heatiness are ulcers in the mouth and a poor appetite. In a way, the rice porridge is therapeutic as the light meal allows for better digestion which in turn allows the body to recover faster.

According to Mum, rice was a scarce commodity during the World War II. If the family had sufficient supply, they would have cooked rice, if not, it would be rice porridge. They reared poultry and pigs for meat, and also grew their own vegetables. Sweet potatoes were one of them. It was a luxury to have sweet potatoes in the porridge during those times.

With the weather now alternating from hot to humid to rainy and back, I thought it would be a good idea to have some of this porridge. Wuan could not get local sweet potatoes at the Pandan Perdana wet market. She bought some Japanese sweet potatoes instead. They are just as good although the potato was not as sweet as I had expected. One good thing about Japanese sweet potatoes is that they do not have chewy fibres like those found in the local varieties. 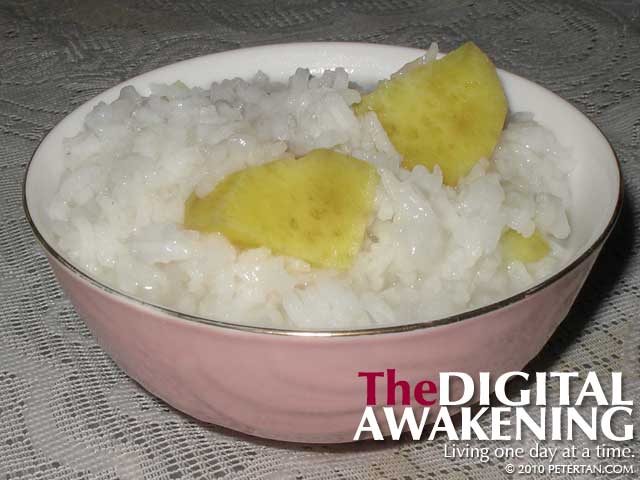 Peel sweet potato and cut into chunks. Rinse rice 4 or 5 times until water runs clear. Put rice and sweet potato into the automatic rice cooker. Add water. Allow to cook for another 5 minutes after the porridge begins to bubble over. Turn off the cooker and let sit for another 15 minutes. Do not open the cover until ready to serve. To be sure that the potato is thoroughly cooked, gently poke a fork into it. If the fork goes all the way in, it is cooked. The porridge can be eaten as is. Sometimes, I add some light soy sauce for taste. Serves two.