We passed by a durian stall near our house on our way back after participating in a Rakan KL event. There was a big sign offering 2 durians for RM10. That set off my craving. We drove further up the road to another make-shift durian stall to see if we could get a better deal. That stall only sold the fruits by weight.

I am from the era when we paid for durians by fruit rather than by weight, therefore had no idea what a good price was. So, we went back to the first stall. The 2 for RM10 were smaller sized durian kampung. I have eaten very good durian kampung before but these were not exactly cheap. At the peak of durian season just a while back, these were going at 3 for RM10. 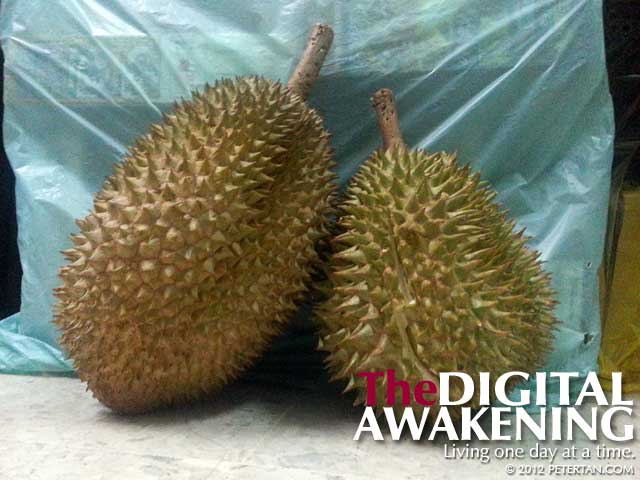 Nevertheless, my craving had to be satiated. The stall was also selling Musang King durians at RM18 per kilo. I have never eaten this durian before and preferred to know how it looked like before I bought any from an unfamiliar stall. The seller told Wuan his durians were from Jelebu in Negeri Sembilan. She got the seller to select two durian kampung for us and got him to open them as well.

The durians did not exude any pungent aroma in the car. At home, even when I was sitting just a short distance from them in the living room, there was no strong smell. In the mouth, they were sweet to the taste but their odour were uncharacteristically muted. Needless to say, that left me wanting more. Perhaps I should have thrown caution to the wind and bought the Musang King instead.