Difficult it may be for me to tear myself away from writing on disability rights in this blog, I have decided that I have written all that needs to be written in more than 300 entries. I have nothing new to say anymore. It has come to the stage where the points that I raised are repetitions of what I have written many times before. I should really stop flogging the dead horse now.

This hiatus will do me a world of good and perhaps provide a fresh perspective on the entire issue. The work is not done yet but this workman needs to put down his tools for a while to concentrate on some personal pursuits.

I miss those days when this blog was more personal and my entries were more emotional. I hope to egg my writing on to that direction again. This also reminds me that the weekend is almost here. The one thing that I really really wish to do come Sunday is to wish Mum a “Happy Mother’s Day.” 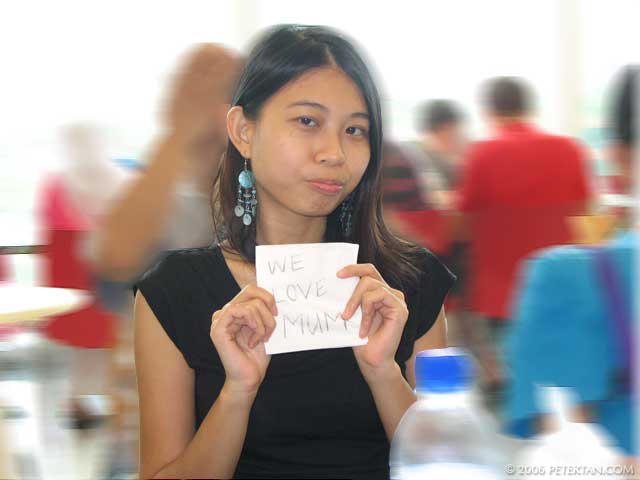 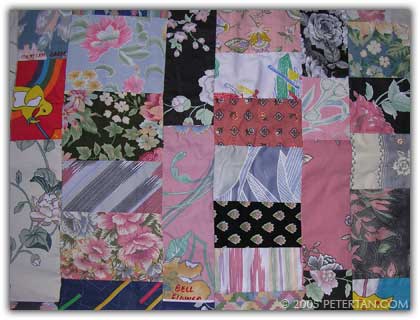 Next year, I thought. The hospital was not such a conducive place for a celebration. Next year, perhaps, a cake, a scrumptious meal peppered with laughter and happy faces of people who truly cared for her, and a meaningful toast to the person who had given me everything. Next year. By then, she surely would have recovered enough to eat a full meal again.

The pungent smell of antiseptic pervaded every where. I constantly looked out the louvered windows at the world outside. Traffic was crawling. It was a bustle down there. In the distance, hills obscured our apartment. Behind those hills lies comfort and security. Home is truly where the heart is. I longed to take her back to this place we have called home for the past four years. Soon.

Her face looked more radiant that day. The pallor was slowly being taken over by ruddiness. She was given two units of blood and some other medication intravenously. She ate, not her normal portions, but she ate. She looked cheerful. It was as a good sign. In my mind, I could finally see the silver lining behind that dark cloud that had hung low over us those months.

If I added a bouquet, I wondered if she would fuss. A small colourful bouquet would be nice. Those thoughts swirled in my mind as I planned for the celebration next year. She loved flowers. All her life, she was surrounded by flowers. If there were none, she would cultivate them and they would bloom. There were adeniums, orchids, lilies, miniature roses, anthuriums, heliconias and my favourite magnolia. Because of her, my life has been filled with flowers and greeneries too.

I took a good long look at her. Her hair had all turned grey. They had become so sparse that it barely covered her scalp. The lines on her face seemed to have furrowed even deeper. She got breathless quickly. How much she had aged those few months that she became ill. This was the woman I thought would never grow old. Even if she did, in my mind she was always as sprightly as she was when I was just a toddler on our shopping trips to the then famous Campbell Street.

She never lived to let me honour her on that special day. She died exactly two month later. My next year was one year too late. It is regrettable that I only had the thought to pay tribute to her at a time when I was about to lose her. I never got to fulfil that even. Last year, when Mother’s Day arrived, I mourn for that missed opportunity. This year it is just the same.

Such is the irony of life. I never knew how to appreciate her for all the years when she was around caring for me. In my teenage years, she tended to me as if I was still her little child. She pampered me even into my adulthood by doing the things that I could not do myself. She never once complained. She devoted her life to looking after me. Those little time that she had for herself she found pleasure in gardening and sewing. She made clothes and patchwork blankets and gave them away to all who asked for it.

Mum was frugal but never miserly. She left nothing to waste. What she could afford she gave generously. Where she could not, she contributed with her time and effort. There was one time when she single-handedly bought the cloths and made clothes for each and every inmate of an old folks’ home, all at her own expense – pants for the men and blouses for the women. There were about thirty of them. She spent weeks making them, in between overseeing to my needs, gardening and other household chores.

Mum was the eldest of five siblings. She had only primary education. During the Second World War, when food was scarce, she worked in her grandfather’s plantation cultivating vegetables and tubers to feed the family. In her early adulthood, she worked as a domestic maid, a cook and a nanny. When she had saved enough, she enrolled in a tailoring course. She was already in her thirties then.

She became a tailor. That must have been her ambition. She worked hard at it. Although she had a difficult life, Mum never let that hold her down. Despite the struggles, her life was colourful like the fabrics that she made into beautiful clothes. She made the best out of the worst situations. Good or bad, she took everything in her stride. I wish I had inherited the perseverance and tenacity that drove her. I desperately need those virtues to prevail over what I am going through now.

In my eyes, she is the perfect mother, one that every child would be blessed to have. I was blessed. I continue to be blessed by her legacy. My regret is that I failed to show my appreciation to her when she was alive. I hope she is proud to see that I have learnt to look after myself now. That is all I can do to remember her by – to live the life she had given me in the best possible ways. That is the little I can do to make up for the missed opportunities to tell her how much I appreciated her. That is all I can do. Happy Mother’s Day, Ma. May the Lord’s perpetual light always shine upon you.