We usually loaf around shopping complexes most of the times that Wuan is in Penang. This time around we wanted to do something different. Wuan had always wanted to explore the island’s inner city and that was what we decided we would do. Having being born and bred in Penang, I am embarrassed to say that I have never explored those little nooks and crannies of this old city that has made Penang so famous the world over.

After searching online for a suitable accommodation from where we could conveniently traipse from, we settled on the City Bayview Hotel. We booked the Superior Room for two nights as that was the only room type available. For RM138 nett per night with two buffet breakfasts thrown in, we thought it was a bargain. 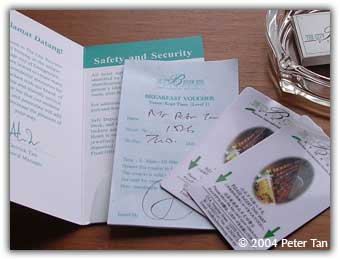 Day 1 – 1118 hrs, Monday, June 21
When we checked-in, we asked for higher floors. We were pleasantly surprised that the hotel upgraded us to a Grand Deluxe Room at no extra charge. The room was more spacious and it overlooked the E & O Hotel and the North Channel. We could see ships sailing by and little sampans bobbing in the sea. The haze was not as bad over here as compared to Bayan Baru.

Day 1 – 1232 hrs, Monday, June 21
We invited Mr. Tan, my neighbour, to join us for lunch as he was around the vicinity. We had buffet lunch at the hotel’s coffee house called the Kopi Tiam. After eating to our hearts’ content, we lingered a while in the coffee house to let our food settle properly. 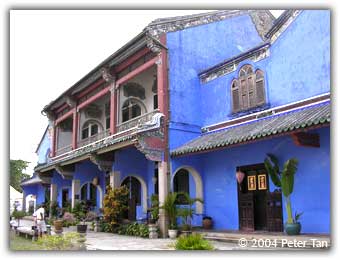 Day 1 – 1425 hrs, Monday, June 21
Wuan and I set off to discover the treasures Penang has to offer. Our first stop was the Cheong Fatt Tze Mansion in Leith Street which was just across the road from the hotel. Entry to the mansion was RM10 per person inclusive of a bookmark and a guided tour which is conducted daily at 11am and 3pm. The doorman charged us for one person only as I was unable to follow the guided tour.

Wuan participated in tour which lasted approximately one hour. While she was inside, I whiled my time away appreciating the unique designs of the exterior. After what seemed like a long time, Wuan finally appeared from the tour full of stories of this famous blue mansion, which is one of the few surviving mansions painted in this unique indigo blue colour. Wuan loves anything antique and if she could she would have spent the entire day there appreciating the intricate workmanship of the decors and structure.

Day 1 – 1639 hrs, Monday, June 21
Just a hop away from the mansion on the same road is the Benggali Mosque with its rather unusual minaret. Tall vertical windows adorned each level of the minaret’s three levels. We stopped at a coffee shop nearby to get a bottle of mineral water as the weather was hot and humid. One can walk around the inner city without carrying snacks and water as it is available at most coffee shops, mini markets and little grocery stalls by the roadside dotted all over the place.

Day 1 – 1648 hrs, Monday, June 21
We took a leisurely stroll down Muntri Street. Our first stop was the Hainanese Temple. The exterior walls of the temple were adorned with relief sculptures of Chinese mythology and legends. These sculptures looked almost alive if not for its lack of colours.

Day 1 – 1659 hrs, Monday, June 21
The Penang Ta Kam Hong is the Goldsmiths’ Guild. The exterior is unpretentious and lacks the intricate designs like the other old Chinese buildings that we visited earlier. Wuan took a shot of the arch and we continued our way down the street. 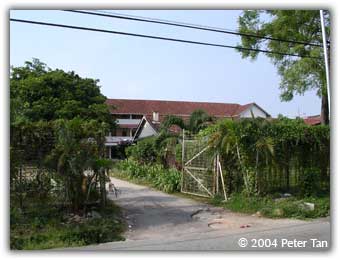 Day 1 – 1702 hrs, Monday, June 21
Muntri Street is one road I know well. As one of the Traffic Wardens during school days, I used to hold up the lollipop, a red stop sign, to control the flow of traffic and allow fellow students to exit from the school’s back gate in their bicycles and motorcycles. As we passed the back gate the memories of those days came rushing back.

Day 1 – 1708 hrs, Monday, June 21
We turned into Love Lane and then out to Farquhar Street. This side of the road that we were on is lined by the St. Xavier’s Institution (SXI), Church of the Assumption, Penang State Museum and St. George’s Church. 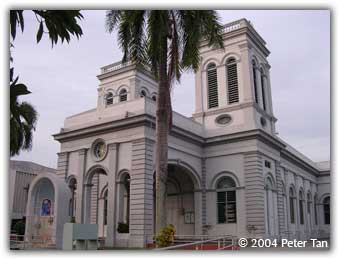 Day 1 – 1712 hrs, Monday, June 21
I have studied in the SXI for two years from 1982 to 1983 but have never once gone to the Church of the Assumption. The doors into the Church were closed. Wuan went to the bulletin board to check for the time for Mass for Tuesday but there were none for that day. The way down to the museum was a harrowing experience. The pavements were not wheelchair friendly as there were no ramps. We traversed on the road gingerly with the traffic speeding by. The museum was closed for the day. 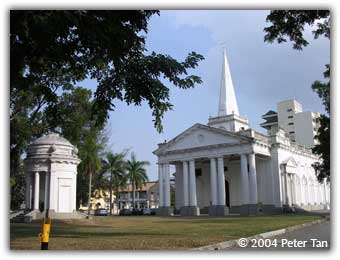 Day 1 – 1717 hrs, Monday, June 21
The St. George’s Church is the oldest Anglican church in Penang. It was built in 1818. The columns of the portico made it look like a Grecian temple. As it was getting late, we took a few shots of this distinctive structure and made our way to the next destination. 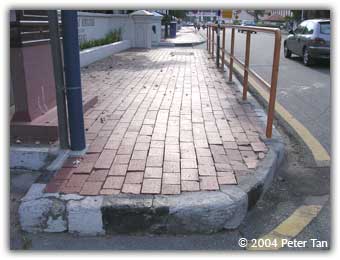 Day 1 – 1721 hrs, Monday, June 21
The return journey was even more nerve-racking. The traffic was especially heavy as people just got off work and were rushing home. We hoped that none would crash into us. 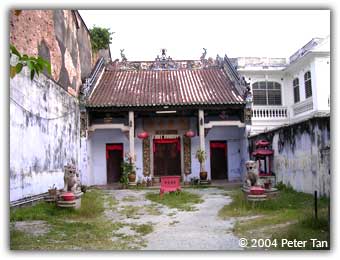 Day 1 – 1731 hrs, Monday, June 21
Next on our itinerary was the Carpenters’ Guild which is the oldest Carpenters’ Guild in Malaysia. It is called the Loo Pun Hong in Chinese. The compound looked scruffy and we could have easily missed it if we were not looking for it. The walls were moldy and the paint was peeling off. 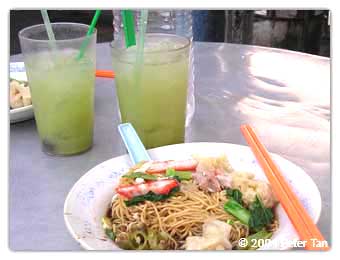 Day 1 – 1747 hrs, Monday, June 21
As we were feeling hungry after all the strolling, we went looking for food at Chulia Street. Actually, Wuan was more famished than I because she had been pushing me all over the place since we left the hotel. We settled for wantan noodles and ambula (buah kedondong) juice at the corner of Chulia Street and Carnavon Street. I do not know if we were hungry or the food really tasted good.

Day 1 – 1801 hrs, Monday, June 21
Having filled ourselves with fuel for the evening, we explored the place a little and found a water dispensing machine to replenish our empty bottle. 20sen per litre is so much cheaper than the RM2.50 we paid for one 1.5 litre bottle earlier. 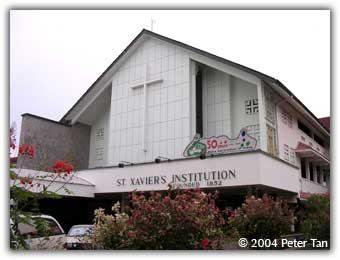 Day 1 – 1816 hrs, Monday, June 21
We cut through Love Lane and then to Farquhar Street again to go back to the hotel. As we passed SXI, I could not resist going in to relive the days we had assembly at the front of the school singing the national, state and school anthems while the flag was being raised. The school looked almost the same as it was when I left it in 1983. As we loitered around the corridors, I could almost hear the din of students chatting away even though it was dead silent.

Day 1 – 1841 hrs, Monday, June 21
After having exhausted the camera batteries, we went back to the hotel. The heat coupled with the distance we covered drained us of every ounce of energy. Whilst the batteries were recharging, we promptly fell asleep in the comfort of the inviting mattress and coolness of the air-conditioning. 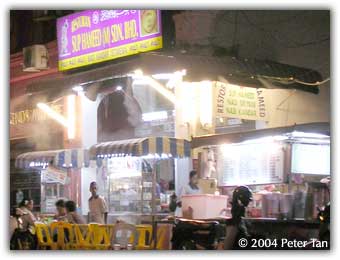 Day 1 – 2215 hrs, Monday, June 21
We awoke feeling hungry. I remembered a place I have had some nice food before at Penang Road. We reached there only to find the place deserted. Feeling really hungry, we ordered a roti canai and teh halia at a nearby store but the food was below expectation. On our way there, we had passed by a row of stalls which were crowded with diners and we thought the food must be good. We picked the first stall we reached and quickly ordered a bowl of sup ekor (oxtail soup) which also did not go down well. Feeling a little disappointed, we headed back to the hotel to call it a night.