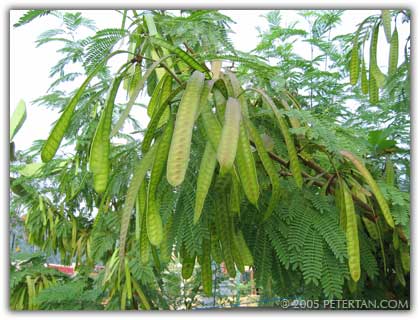 When my second maternal aunt heard that I am having problems with my kidneys, she called me up. “Try the small petai,” she said. “My neighbour here, dried the pods, steeped it in hot water and drank it. When she went back to see the doctor, her condition improved tremendously.”

There used to be a plot of vacant land beside my house. The neighbourhood kids and I would play there and occasionally pluck the petai belalang, peeled open the pods and ate the seeds inside. It tasted slightly sweet with a pungent smell, not unlike that of petai. It proliferates well in secondary forests and cleared lands. In Penang, several plots of vacant lands around Jalan Mahsuri are overgrown with the petai belalang trees.

Petai belalang (Leucaena leucocephala) is known among diabetics here for its blood glucose lowering properties. I have also heard of someone who was diagnosed with kidney cancer looking for petai belalang because it supposedly helps too. It is used most extensively as cattlefeed. It is more commonly known as cowbush because of that.

As for me, I will stick to my current regiment. Many who are concerned with my well-being have suggested alternative remedies. I know they meant well but I trust Dr. Liong best with the care of my kidneys. Moreover, there is no point in risking further damage to my kidneys by using folk remedies that have not been scientifically tested for efficacy and toxicity.