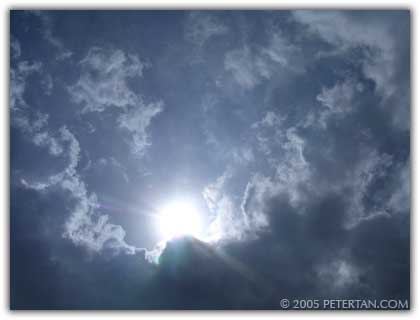 Among my many aversions, preachers and people who ask obvious questions about my disabilities top the list. Where possible, I always responded in an abrupt but tactful manner. Questions like ?Can?t you stand up and walk?? annoyed me no end because it was apparent I could not. Why would I be using a wheelchair for the past twenty years if I could walk? An incident involving those two topics got me all flustered just now. The following conversation was originally in Hokkien.

“Can you stand up and walk?”

“Can you bend your legs? Are they all stiff?”

I did not answer.

“Do you believe in the Christ?”

“Where is your church?”

“What denomination is that?’

“That is not Christianity.”

“What do you mean not Christianity?”

“You do not worship Jesus.”

“Who told you that? I am a Christian!”

“That is not Christianity.”

That was where I lost it. I told him not to put down someone else’s belief to glorify his. I must have raised my voice a little as my neighbours who were chatting among themselves beside me suddenly became silent. There are many things that I will compromise and tolerate but where my faith is concerned, I will not take a slight like that without having my say.

“I am a Protestant. We believe in Jesus Christ.”

“We pray for the sick and the lame. Does your church do that?”

He asked a few more questions but I continued to ignore him. After a while, he must have sensed that I was extremely annoyed and quietly walked away. Immediately after that, a sense of guilt overcame me. I wished I had been tactful like I have always been when dealing with such situations. Perhaps he had meant well in trying to get me to his church for those healing prayer sessions. However, the one thing that saddens me most is how professed followers of the Christ can put down the belief another follower in such an insolent manner.

47 thoughts on “You Do Not Worship Jesus!”