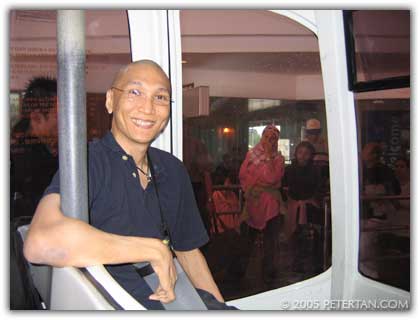 Inside the Genting Skyway gondola.
Photo by Wuan.

During the previous trip to Genting Highlands Resorts, William had suggested that we take a ride on the Genting Skyway. He said that the view would be exceptional. And I wonder how I was going to get into the small gondola. Incidentally, on that same day, we met fellow blogger Din who is one of the executives with the Skyway. Din assured us that it had been done before and invited us for a ride the next time we are there. 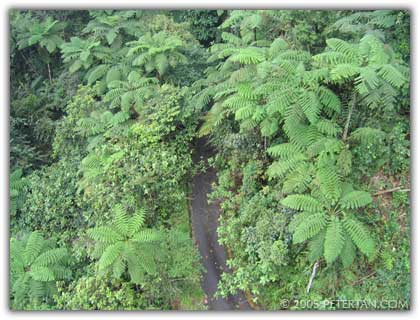 The view from above.
Photo by Wuan.

We went to Genting Highlands Resorts again last Saturday. The weather was not as cold or a foggy as the previous time. We met Din at the Skyway Station at Highlands Hotel. I still had reservations on how I was going to get into the gondola. There was not a long queue but with Din around, I do not think we needed to wait in line anyway. 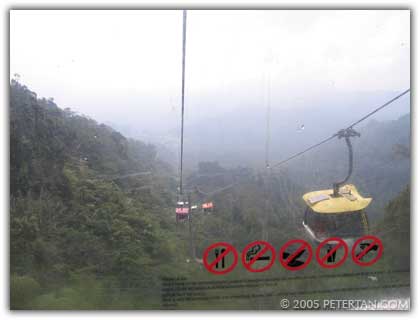 On the way down from inside the gondola.
Photo by Wuan.

When it was time for us to board, the Skyway was briefly stopped to allow Din and William to carry me into the cabin. It was a struggle initially when Wuan’s backpack that William was carrying got caught in the doorway. Din got one of his staff to take over and before long, I was inside the cabin. The seat, being a hard bench, was not the most comfortable one for me to be sitting on. We left my wheelchair at the station as we did not plan to get off at the Main Station at Gohtong Jaya. 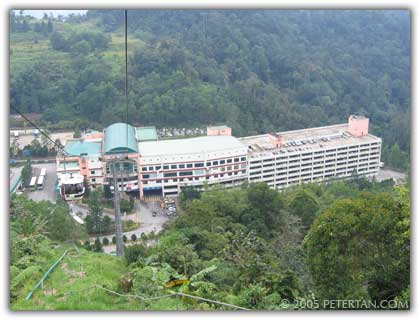 After that first hurdle of getting me into the cabin, my next anxiety was whether I would slip off the seat as the gondola made it way down the mountain. I hung on to dear life on the support pole inside the cabin. After those few harrowing seconds when the gondola left the station and there was nothing below us except trees many hundred feet below us, I began to enjoy the breathtaking scenery. Din began to explain to us about the technical aspects of the Skyway system and the various sights along the way. 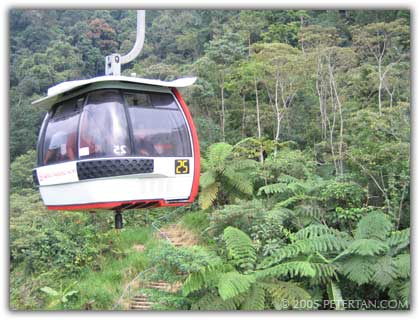 The gondola moving in the other direction.
Photo by Wuan.

What I liked most about the ride is the flora all along the way. It was all green as far as the eyes could see. The sights were great from up there. The silence was tranquil, except for the intermittent mechanical squeaks of the moving gondolas and our own chattering. The temperature in the cabin was not as cold as I had anticipated. In fact, I was warmed up from the exertion of holding on to the seat for the entire ride. 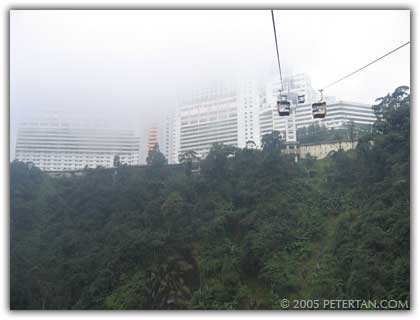 Moving away from Highlands Hotel Station.
Photo by Wuan.

When we reached Main Station at Gohtong Jaya, Din explained about the workings of the flywheel and the counterweight. This guy is a veritable tome of all the technical details of the entire Skyway. Ask him anything and he could go on without even pausing for thought. According the Din, the maximum speed for the Skyway is 6 meters/second makes it the fastest cable car system in the world but it usually runs at 4.8 meters/second. The surroundings were undisturbed as much as possible in the process of constructing the Skyway in order to preserve the natural environment. He also briefed us on the safety and maintenance of the entire system and the pylons. 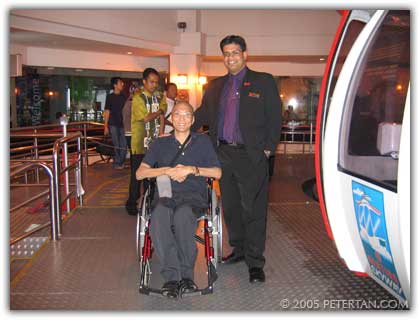 Din and I.
Photo by Wuan.

The ride back up was even more spectacular. The view up, although similar was different. Perhaps that was from the opposite perspective. Wuan and Cynthia took most of the photos. I had my digicam with me but had both my hands firmly on the seat and the pole and did not get to take any. Before long, we reached Highlands Hotel Station again. The clouds that partly obscured the complex made is such a divine sight. That was another experience that I will not forget for a long time. This is one of the things that I had wanted to do and thanks to William and Din, I got to fulfill it. This goes on to prove that with great friends nothing is impossible, almost.

13 thoughts on “With great friends nothing is impossible”