My mother’s 10th death anniversary passed by without much fanfare last Saturday. No, the passage of time had not diluted the memory of her. It is just that I made a conscious effort to not observe it in a significant way.

Death anniversaries are reminders of the end of a life, the loss of a loved one and a time of great sadness. I have gone past the stage of profound grieving and sense of loss. Instead, I am channelling those emotions into an endeavour, which is still under wraps, that I hope will be productive.

In the place of grief and sense of loss, acceptance and realisation have taken over. For every birth, there is death. Everyone has to go through this cycle. I had lost loved ones. I had grieved. Now, I have moved on. That is how I want my loved ones to live after I am gone – not to grieve too much but move on as soon as possible. I believe my mother would want me to do the same.

HER once luxuriant and thick hair was now sparse and white, barely covering her scalp. The steroids that she had been taking to treat her leukaemia made the sides of her face puff up. The skin on her arms were saggy and wrinkled.

She looked better nonetheless. There was a glow in her face, an encouraging change from a few days ago when it was all sallow. She was suffering from severe anaemia. The doctor had forcibly admitted her into the hospital for immediate treatment. The two units of blood transfusion had done her good.

Her cheerful disposition somewhat dissipated my worries. She was still weak and would become breathless quickly, but her appetite was slowly returning. Things were finally looking up after days of uncertainty.

I sat beside her bed and looked out the window. The sun was setting behind the hills. The cacophony of birds returning to roost outside was punctuated by impatient drivers caught in a jam outside revving their engines.

Far in the distance, beyond the hills, was our apartment. We had moved there four years ago and made it into a cosy home. The air was fresh. The neighbours were friendly and helpful. We liked living there.

I wished she could go home soon. The hospital was not a conducive place to recuperate. There was little privacy in the open ward. Moreover, the food was bland. That did not help much with improving her appetite.

It was Mother’s Day that day. I remember very clearly. I had wanted to buy a cake but hesitated. We had never celebrated it before. It never crossed my mind to honour her on this day in previous years.

Celebrating in the hospital felt odd. “Next year,” I told myself. She surely would have fully recovered by then. We could feast on a hearty meal of her favourite food. I was not even sure what thosewere.In my 37 years as her son, I had never bothered to find out.

My mother was a humble woman. She was thrifty personally but generous with relatives and friends. She seldom turned them down if she could help. They sometimes took advantage of her but she continued to lend them a hand anyway.

The Japanese invaded and occupied Malaya when she was 16. She sought refuge at her grandfather’s plantation deep in the hills of Penang island. They had heard of the brutality the soldiers had inflicted upon the population in the city.

Life was difficult then. Food was scarce. She supplemented the family’s food rations by cultivating tapioca and vegetables. Long after the war, every time we had tapioca, she would recount how it had carried the family through those lean times.

After World War II, she worked as a domestic maid, a cook and a nanny for British families in Penang and Singapore. In her mid-30s, she finally saved enough to enrol in a tailoring course. That had always been her ambition. She graduated and became a seamstress.

She found joy in the simplest of things. With her trusty sewing machine, she churned out clothes, curtains and quilts. She also loved gardening. Everything that she cultivated flourished. Flowers bloomed. Trees fruited. Her thumbs were that green.

One of the traits that I admire most is her perseverance in the face of adversity. It was also that trait of hers that pulled me through the darkest hours of my life after the accident. She simply refused to allow me to give up.

Despite her tenacity, she could not fight the ravages of the disease that weakened her by the day. It was very painful to see her wasting away and not being able to do anything. We never got the chance to celebrate our first Mother’s Day together. Two months later, I held her in my arms as she breathed her last. Losing her was the saddest moment of my life.

This is the 10th year I live in regret for that one act of procrastination. It is such an irony that I never thought of telling her how much I appreciated her when she was around. Now that she is no longer here, there is so much that I want to say to her. I still mourn for those lost opportunities.

This Mother’s Day, I dedicate my work on disability advocacy in her memory. She cared for me selflessly and unconditionally from the day she gave birth to me until a few months before her passing. I am who I am today because she believed in me and gave me all the support she possibly could.

I also want to give a shout-out to all mothers of disabled children. Thank you for being our pillars of strength. We may never be able to fully express our gratitude but please know that deep in our hearts, we truly appreciate your sacrifices and all that you have done for us. Thank you and Happy Mother’s Day!

My mother’s last will and grant of probate came by courier just now. The lawyer had sent it over after all the matters have been settled. As I held the documents in my hands, I was choked with emotions. She was a simple woman but she had foresight. She knew she could not be there for me forever and had the will made. That was long before she was diagnosed with leukaemia.

In life and in death, she had it all laid out for me. I never ran out of the urological supplies that I needed. Her cache of Chinese herbs that she painstakingly simmered over charcoal fire was always laden. The soups were for me to regain my health. Day or night, no matter the hour, whenever I needed assistance, she was there. She was always there. 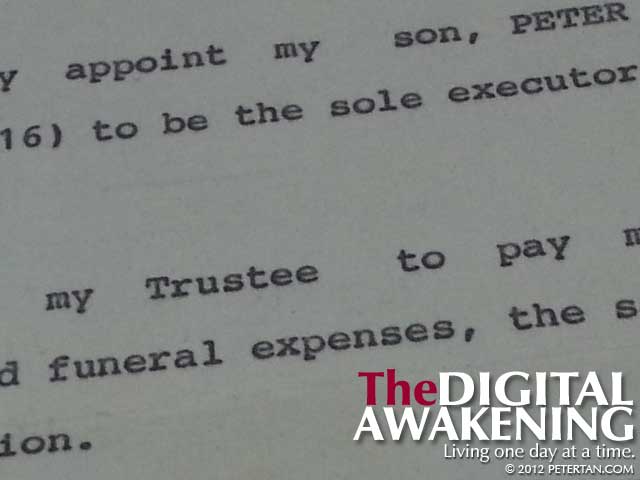 My mother’s last will.

I truly regret that I could not reciprocate the love and care that she had unconditionally showered on me. If ever I am granted a wish, I will wish to hold her in my arms again, no matter how brief that moment will be, to tell her how much I love her; and how much I still miss her after all these years; and how lucky I am to have her as a mother; and how sorry I am for not knowing how to appreciate her when she was around; and how I am a better person today because of her. Because of her…