Our feline friends
by Peter Tan. Posted on March 15, 2014, Saturday

ONE sunny afternoon, my wife Wuan found her hiding behind some flower pots in the garden. She had a white kitten with her. We fed them and let them be. They became familiar with us after a few days and graduated to sleeping on the steps just outside the entrance into the house.

The little one would scamper all over the grass and even sneak into the house while the mummy cat, whom we later named Fei Por (fat lady in the Cantonese dialect) watched from a short distance away. The kitten disappeared mysteriously one day later but Fei Por stayed on.

She delivered another litter a few months later. The three kittens were adorable and full of energy. They would play and rest inside the house during the day, and huddled together under the car in the porch with Fei Por at night. One of their cutest antics was to climb onto the roof of a neighbouring house and peek at us from above when we called out to them.

We did not realise that there were dangers to letting the kittens run around the neighbourhood. One was hit by a car. Another disappeared just like that. We named the remaining kitten Patchy for the unique patches on his back. When he was old enough, we had him neutered together with Fei Por. Unfortunately, he succumbed to unknown causes a few weeks later.

Fei Por was heartbroken. So were we as we had grown very fond of him. She would come into the house, search all the nooks and crannies that the kittens liked to hide in and mewed out to them sorrowfully. It was heartrending to see her in such grief. She recovered eventually which was a great relief to us as it was painful for us to see her in that condition.

From then on, we were determined to take better care of her. We sent her for regular check-ups. The vet concluded that she was a mature cat but was not sure how old she was. Whenever we had to be away for several days, we would send her to pet boarding to ensure that she had sufficient food and was taken care of for the duration.

On one occasion when we went to pick her up from boarding, Wuan was enamoured by a little kitten that was put up for adoption there. He was the only kitten out of three that approached her when she went near. He even licked her fingers when she held him up. We took him home with us after he was inoculated and dewormed.

Fei Por took an instant liking to him when Wuan put them together. She started grooming him. Her maternal instincts were obviously still intact. We named him Cheeky for his playfulness and fondness of nipping on our finger and toes. Fei Por became the mother he never had and he in turn became the object of her affections in place of the kittens that she lost a while ago. They have been inseparable since. That was six years ago.

We lost Fei Por last year. She was unwell after we took her back from the boarding place. We thought it was just the difficulty in adjusting in an unfamiliar environment but we were mistaken. She was restless and we let her out. It rained heavily that day. I called out to her but she did not return.

Early the next morning when Wuan was getting ready for work, Cheeky excitedly asked her to follow him. After living with them that long, we understood what they wanted each time they came to us. He led Wuan to the main door. Fei Por was crouched outside. She was soaked, dishevelled and appeared very sickly. When we finally managed to take her to the vet, the prognosis was not good. Still, we kept our hopes up that she could pull through. She did not.

Losing Fei Por was as painful as losing a loved one. She was one of us. She was family. Cheeky was exceptionally docile for the next few weeks, perhaps grieving for her in his own way. Her cremated remains are now kept in an urn that sits in her favourite corner in the living room overlooking the garden that she used to frolic in.

From our bad experience with allowing Fei Por’s kittens to roam freely outside, Cheeky has never gone out of the house unsupervised. The furthest he is allowed is the fringe of our small garden where he would sit contentedly and chew on the fresh grass.

He has the most endearing personality. When he was younger, he liked to sit on my lap or just sleep beside my wheelchair while I was working. He likes to accompany me when I take my afternoon naps by sleeping beside me on the bed. Other times, he would ask for my hand to rub his face on or knead my tummy while purring very loudly. I am mostly home alone on weekdays. His companionship is truly a godsend. And he still nips at our fingers occasionally after all this while.

We now have two other adopted cats living with us. Wuan and I do not believe in buying pets, especially when there are so many strays running around in the streets. Adopted animals can be equally as adorable as bought ones. One animal adopted is one animal saved.

The other two cats have their own endearing characters as well that have kept us entertained to no end. Together, the three of them have injected sparkle with their antics into our otherwise very quiet household.

And as for Fei Por, she is always in our thoughts. We are forever thankful to her for initiating us into this path. Our lives have been abundantly enriched. May she have fun at the Rainbow Bridge with our other animal friends who have gone before and after her.

Fei Por’s remains were cremated and interred in an urn the day after she passed away. We could not bear to have her simply buried in an unmarked grave in an unknown place. Her home is here with us and it is only right that we bring her back with us. Her ashes now sit in one corner of the living room looking out to the garden that she used to frolic. 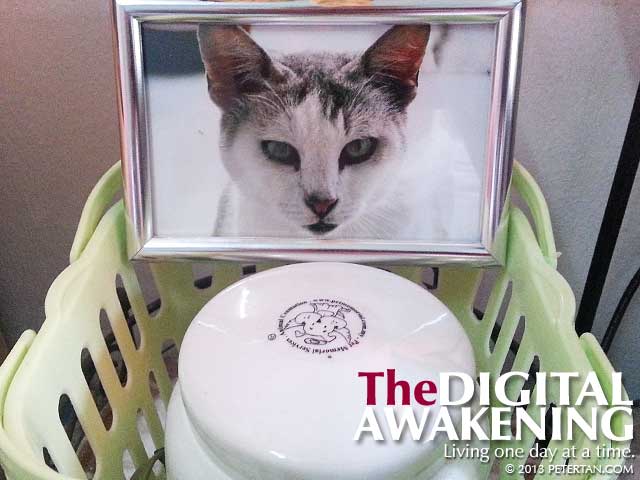 Fei Por’s cremated remains interred in a urn with her portrait. 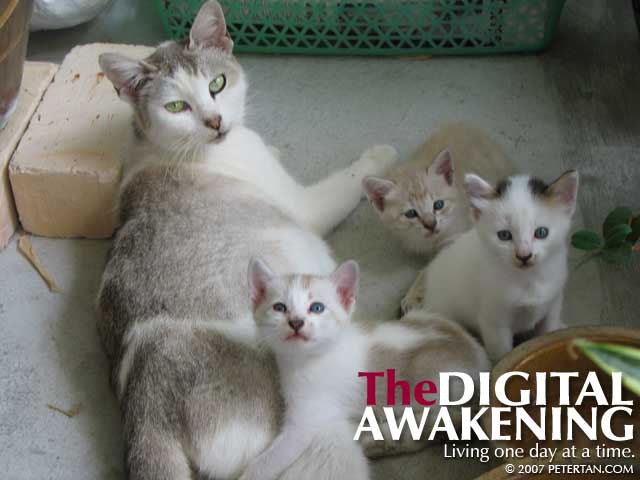 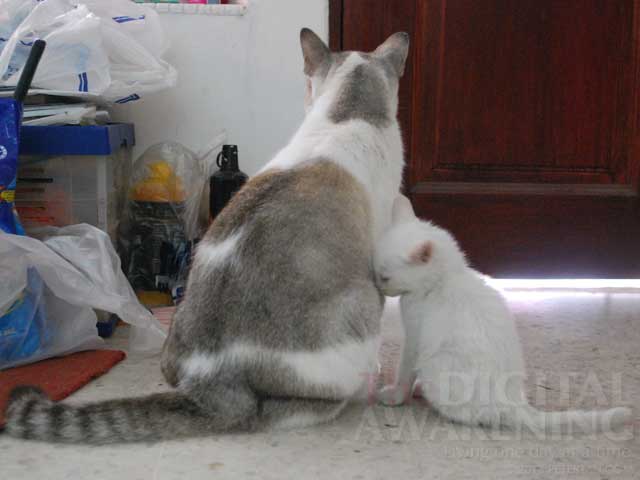 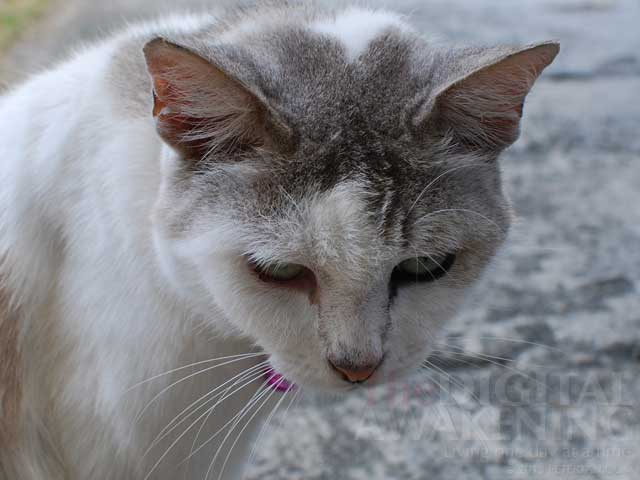