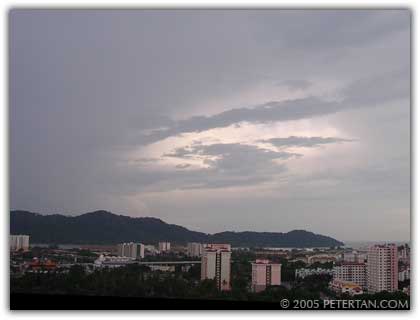 Pauline introduced me to that beautiful verse of this entry’s title many months ago. It is the beginning of William Wordsworth’s poem called Daffodils that was written in 1804. I had not thought about it much, until today.

I was sitting in the living room blog hopping and listening to Kenny Rogers. A steady stream of cool wind was blowing in through the bedroom window. I strained my neck to peek out from where I was and caught glimpses of clouds. Grey and white and many hues in between were splashed across the sky. Rain is imminent as has been for the past week.

Throughout the day, the sun had been shrouded. An air of gloominess pervaded. This exacerbated the sense of lonesomeness that has been lingering for the past few days. Then they are some issues that I need to address with some urgency but am unable to. All those weighed me down to such an extent I felt burdened beyond my abilities. I was depressed and I did not know what to do.

And I thought about the clouds, lonely as they were, the wind would eventually lead them to another billowy mass to form an even bigger one. That reminded me of this poem and I went looking for it and read it, not once, but again and again until I could actually see those golden blooms swaying in waves and waves under the breath of the gentle breeze that swept across the field.

For a while, the load seemed to have been lifted off me as I stood there in the middle of the wide expanse, feeling the zephyr caressing my cheeks. My hair wafted as merrily as the dancing daffodils. I let it be, making no effort to restrain them. In that field, I was void of worries and enjoying the pleasures of the moment.

I closed my eyes. A smile crossed my face. The simple pleasure of reading such an uplifting poem did wonders. Those words, they reached out and coloured an otherwise gloomy day – the brilliance of an English poet who composed it two centuries ago. Today, those imageries that so inspired Wordsworth are still alive and spreading cheer. My heart was full of happiness again.

The Daffodils
By William Wordsworth

I wandered lonely as a cloud
That floats on high o’er vales and hills,
When all at once I saw a crowd,
A host, of golden daffodils;
Beside the lake, beneath the trees,
Fluttering and dancing in the breeze.

Continuous as the stars that shine
And twinkle on the milky way,
They stretched in never-ending line
Along the margin of a bay:
Ten thousand saw I at a glance,
Tossing their heads in sprightly dance.

The waves beside them danced; but they
Out-did the sparkling waves in glee:
A poet could not but be gay,
In such a jocund company:
I gazed–and gazed–but little thought
What wealth the show to me had brought:

For oft, when on my couch I lie
In vacant or in pensive mood,
They flash upon that inward eye
Which is the bliss of solitude;
And then my heart with pleasure fills,
And dances with the daffodils.

8 thoughts on “I Wandered Lonely As A Cloud”