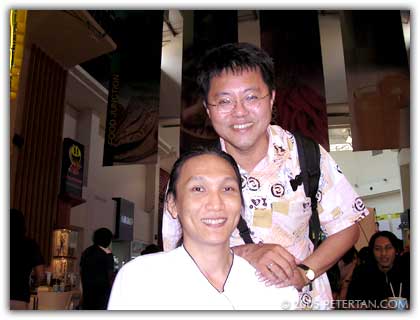 One thing I learnt from the Mid Valley Bloggers Meet is that KLites do not like to wake up at 10 o’clock on a Sunday morning. “Chisin,” said Penny, or something to that effect, when I told her in #MalaysiaBloggers@Dalnet the time was set at 10am on a Sunday. I reasoned that it was better to be there early than to get stuck in the infamous Mid Valley traffic jam around lunch time. Besides, the food court would be less congested.

Irene echoed Penny’s sentiments too. In her entry about this meet, she said, “…and at 10am of all times. Why the ungodly hour? *mutters* I’m going to cekik (strangle) the fella who suggested it when I meet him/her *mutters*” They all came anyway. Irene did not strangle me when we met. On the other hand, she was very nice and polite. 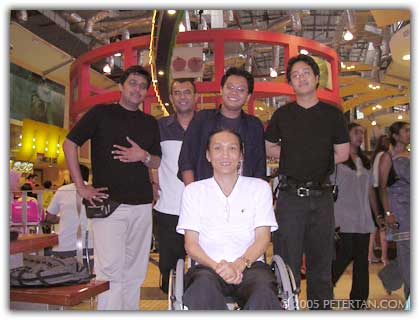 One should see the faces of those who were there when Jeff Ooi arrived. In Malaysian blogosphere, he is considered a royalty. I forgot who said that but yes, love him or hate him, we have great respect for him all the same. When Mack Zulkifli arrived, there was another round of bloggers with awe written all over their faces.

Like in previous meets, cameras were aplenty. There was Jeff with his Nikon D100 that made us feel very inadequate with our tiny point and shoot digicams. We took photos of each other taking shots at each other. The ramen duo of Leo and Fazri were up to their antics of flashing each other again while not stealing candid shots. And Edrei, I did remember you that morning. The next meet perhaps? 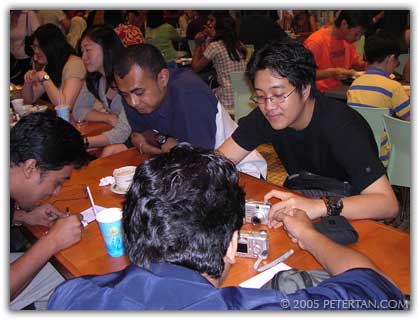 Book Worm was one of those first few to arrive at the meet with her adorable Joanna. Yee Pei, MystiqAngel and Desmo came around the same time. Desmo came in his full riding gear just because I requested that. When he removed the top, he was all sweaty and steamed up. Maybe I can get him to come in the buff for the next bloggers meet. Alan was one of the early comers too. I later discovered that he maintains a blog at Geocities. Interesting!

The first thing Resurrected said when we introduced ourselves was that we probably do not know him. Now we do! Charlyn Tangerine turned out to be a good looking dude just like what he revealed in Yahoo Messenger. Eyeris also turned out to be a guy. I had always related Eyeris to Iris but he had a good explanation on how that blog name came to be. That was two revelations too many for a day. 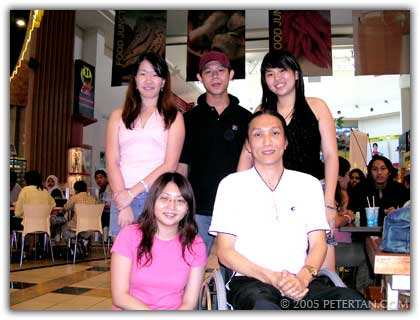 Jess, as usual, was quiet and demure, absorbing in the all the happenings good naturedly. Sashi plonked himself together with Nilesh, Rajan and TigerJoe at the far end of the table where Mack was holding court. Amber came and went like a shadow. Penny was there with DemonicSquid and Loges. Albert overslept and arrived just when I was about to leave.

All in all, it was an interesting day for Wuan and me. I hope it was a good day for all who came too. Our lives have been enriched by your presence and friendship. Your generosity overwhelmed us. Once we were strangers reading each other’s blog. Now a friendship has been forged, one that I hope will last a very long time. Thank you. God bless.

*Photos of the meet are in the Gallery.

11 thoughts on “Meeting My Peers”