Last Saturday, William, Cynthia, Wuan and I went on a day trip to Genting Highlands Resorts. The sky was ominously dark, threatening to pour down on us at any moment. Not one to be deterred, William suggested we go eat the famous Ampang yong tau foo before making our way up to the highlands. Ampang yong tau foo are available in many places in Penang and Kuala Lumpur but none tasted as good as the ones I had that morning.

Genting Highlands was chilly and foggy. My ears were ice cold. William led us to the Starworld Casino at the First World Hotel. What I dislike about the casinos is the perennial stench of cigarette fumes that clung on to hair and clothes and everything else. And one casino is no different from the other – people milling around tables, the frequent holler for a “picture” and gaudy decors everywhere. Wuan and I played the slot machines for a while but we quickly got bored. 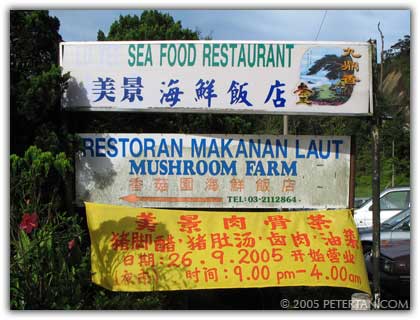 Next in William’s itinerary was the mushroom farm a short distance from the resort. Memories of the mushroom farm that I have been to several times in Penang was enough to make me cringe in disgust. Chicken droppings were used together with straw to cultivate button mushrooms. I was already smelling of cigarette fumes and I did not fancy reeking of chicken manure too. Surprisingly, there was no unpleasant odour at the farm this time.

After Wuan had satiated her shutterbug cravings, we stopped over at the Chin Swee Caves Temple where a majestic nine-tiered pagoda stood. While sitting in the car with William and waiting for Cynthia and Wuan to take yet more photos, I wished I could climb up to the top of the pagoda. I could imagine a most breathtaking panorama as far as my eyes could see. Clouds that were constantly caressing the peaks of the Titiwangsa Range would have made it an incredibly awesome sight. 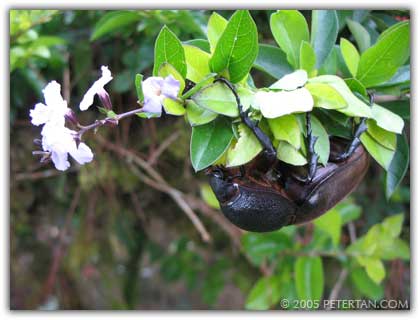 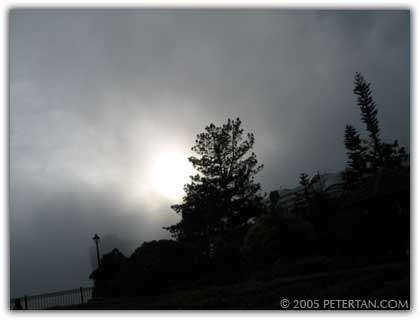 We went back up to the summit and stopped at the garden and observation platform just beside the Theme Park Hotel. The sun was setting. The chilly wind blew intermittently. I shivered in the cold. A large beetle fascinated William and Cynthia. The view from there was no less fascinating. I have been to the resort with Peter many times but have never once enjoyed such spectacular sights. I could hang around there all day if not for the darkening sky and the extremely uncomfortable wind.

After a quick dinner at Genting Hotel, I needed to use the toilet. While I was catheterizing, William and Cynthia scouted for ways to get me into the Monte Carlo Casino. Having found it, we played the slot machines to while some time away before leaving. Wuan and I won a little and then lost it all back to the machines. As we were making our way back to the car park, someone walking from the opposite direction called out my name. I was surprised to meet another blogger at the resort. Hey Din, nice meeting you! It is difficult not to bump into another blogger whenever I go out nowadays. Several days before that, I met Joanne at Low Yat Plaza. 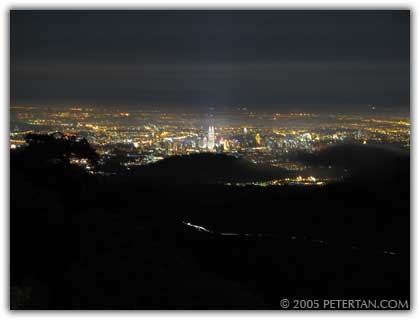 On the way down, the flickering lights of distant Kuala Lumpur captivated us. When we found a nice spot to take in the spectacle and snap some photographs, William took out the tripod and started snapping away. I could not believe he could tolerate the chilly temperature for thirty minutes playing with the camera and trying to get a good shot. We reached home tired but happy for an absolutely interesting day. William is already planning another trip up, this time going up on the Genting Skyway. He wanted me to enjoy the incredible view along the ride. I am still wondering how I can get into the small enclosure of the gondola

Related entry:
Another blogger saw me at Genting Highlands Resorts too! Here is the link:
Oh A Kiss Is Still A Kiss In Casablanca.