The cold early in the morning woke me up. In turn, I woke Calvin to turn the temperature up to 30C. We are both sharing the room. Soon, warm air was spewing out of the air conditioner. It was uncomfortable for a moment but we both soon fell asleep again. 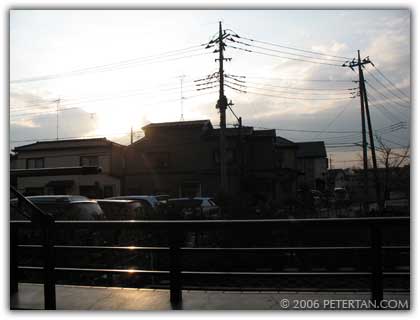 Manganji at 5.50am. The sun rises early during winter.

0730 (GMT +9): The alarm was set to go off. A van was to pick us up at 9.00am. I had a light breakfast of Ensure, one leftover bun from the night before and some prunes. Slow-moving dark clouds partially obscured the early morning sun. The television weather forecast predicted rain in the afternoon. That was my first sunrise in Japan.

0815: I began to dress up. The long johns was difficult to pull up and I had to get Calvin to help me. The van sent to pick us up was early. We were all not ready yet.

0917: We were all in the van and on our way. Ms. Yuki Maejima, the interpreter from the Independent Living Workshop, came to accompany us. The apartment we were staying in is in Hino City. We were to go to the Human Care Association in Hachioji City, a 30-minute ride from Hino. 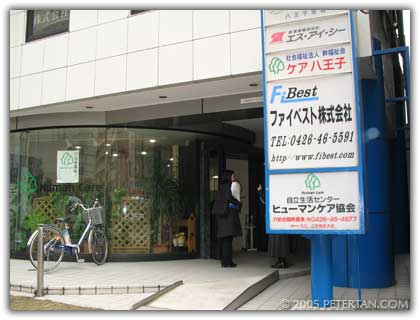 Mr. Shoji Nakanishi, the pioneer of Independent Living in Japan, greeted us. According to him, the Association was established in 1986. The disability movement in Japan is very strong. Hino and Hachioji is very accessible. We were to witness that for ourselves later how true that is.

Mr. Tsukada briefed us on the entire programme of the training. Ms. Ishizaka hoped we would be able to absorb the pertinent points of the training and provided us a set of forms with questionnaires that asked us on our training and problems we face while living in Japan. These forms were to be returned to her on the last day of our stay. Mr. Murakami gave us a short rundown of Hachioji City and got us to complete various forms. We were provided with a medical card and bank card. Our allowances were deposited at the Sumitomo Bank and the card allowed us to withdraw money for our daily living expenses. 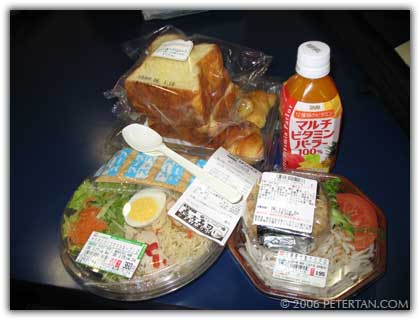 1238: Lunch was a bottle of mixed fruit juices and lunchbox (bento) of salad and pasta from the convenience store across the road. That small store was doing brisk lunch-time business. It was well stocked with sandwiches, lunchboxes, breads and typical Japanese lunch offerings, other than items available at convenience stores like those back home. On our way back to Human Care Association, we came across these two pudgy pigeons that was not very camera-shy.

Immediately after lunch, I quickly requested for an Internet connection, retrieved my mails and posted the entry that I wrote yesterday. Internet access was, and still is, one of the things that I cannot live without. Seeing that Wuan was not online, I sent several mails relating my first day in Japan to her.

1330: Mr. Murukami returned after lunch with our validated health cards. Together with Ms. Maejima, he then took us on a tour of Hachioji City. The other purpose to take us to the bank to withdraw our living allowances. The walkways were very accessible and clean. Surprisingly, all the public buses were accessible too. I hope to ride on one of those buses before I leave.

1402: Withdrawing money from the ATM inside the bank was a breeze. Users were given a choice to navigate the menu in English. I withdrew Y50,000, almost half of my entire allowance for the entire training. It would be a hassle to have to go to the bank often.

1415: After completing our banking transactions we went to the Y100 store. I know for sure Wuan would love the bargains available there. It was a rather well-stocked shop with a mind-boggling array of items from puzzles and cosmetics and kitchen and gardening utensils.

1525: We returned to the Human Care Association. Mr. Nakanishi briefly enlightened again on several aspects of the disability movement in Japan and the workings of the Independent Living Centres. 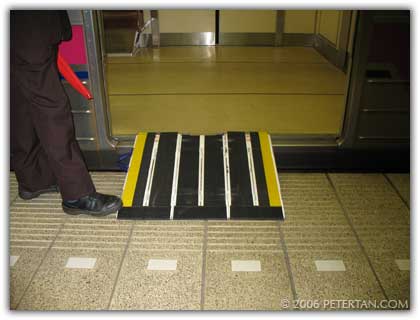 1637: Before we realized, we had to leave already. Ms. Maejima was to lead us to take the trains back to our apartment. We will have to return by trains after our training at the Human Care Association every evening. The subway station is about 100 meters from Human Care Association. Our trip from the Keio Hachioji Station to Takahatafudo Station took 13 minutes. There was a gap between the platform and the train. Ms. Maejima inormed the station master of our destination. He then called the arrival station to inform them of us. The station master placed a foldable ramp for us to board.

1703: The routine was repeated when we arrived at Takahatafudo Station. The station was being renovated. We had to move down one level and then up again to go to the Hino IL Centre for a brief visit. There were lifts for all the stairs. While the station master operated the lift, another staff in reflective vest directed passengers using the same stairs for safety reasons.

1732: Two staff from the Hino Il Centre were waiting for us when we emerged from the station.

1735: Our visit to the Hino IL Centre was brief as we will be going there again on Wednesday to learn more about it. Ms. Maejima was a little worried about my freezing cold hands. She advised me to wear gloves but that would make it difficult for me to use the camera. 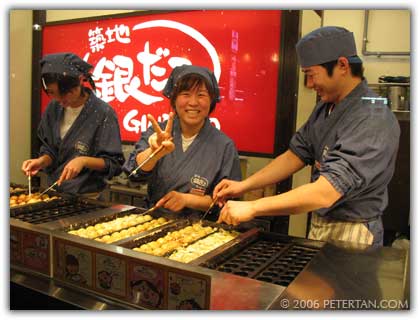 Friendly chef at the yakitori kitchen in Takahata-fudo station in Hino, Tokyo.

1806: Dainty little shop dotted the roads near the Centre. That was a place I would love to explore with Wuan if given the opportunity. We made our way to the Sky Train station that was a stone’s throw away from the station that we stopped just now. The ride took only 3 minutes. We stopped at Manganji Station which was about another 2-minute walk to the apartment. It had been a rather long day. We were glad to be back at the apartment again.