During the last accessible toilet debacle, some have rightly pointed out that they do not see disabled people using those toilets or in public places very often. That I have to agree. The reason why people with disabilities, especially wheelchair users, are not often seen in public places can be attributed to one main factor – lack of accessibility. 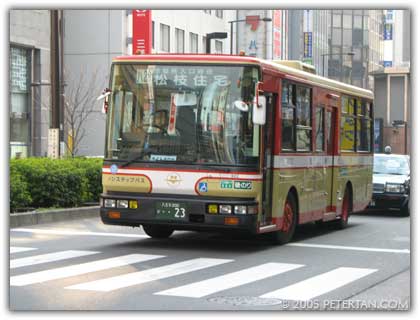 When I was in Hachioji and Shinjuku, I met many wheelchair users going about in both cities. A majority of them are severely disabled, using electric wheelchairs and accompanied by a Personal Assistant. Yet, they were able to travel with ease. This is because Tokyo is very barrier-free and has an accessible public transport system. Walkways are fully accessible. The gradient at the end of each walkway is gentle. Road junctions have traffic lights for pedestrians. I have not seen a traffic light with arrows as is very common here in Malaysia. When the light is green, traffic is allowed to turn left or right. If there is a pedestrian crossing the road, they have the right of way. The traffic will stop for the pedestrian. At night, drivers turn down their headlights when we crossed the road. 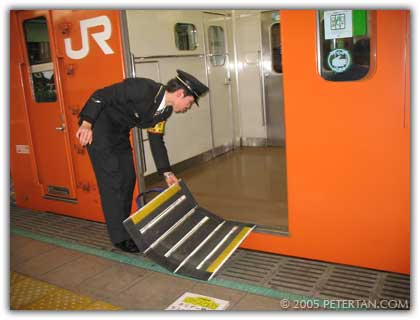 Station Master of Japan Railway with the portable ramp. 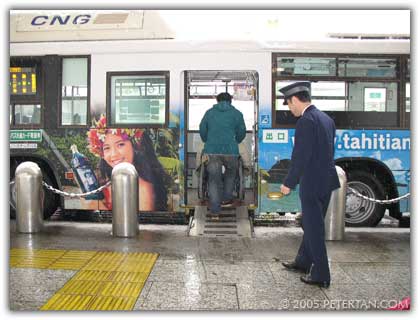 Getting into a non-step bus on a wheelchair at Shinjuku.

The public buses are fully accessible as far as I can see. They are called non-step buses. There are no steps leading into the buses. The height of the bus is almost level to the walkway and can be elevated or lowered hydraulically. They come with a ramp that can be manually pulled out from under the bus and extended. The three of us managed to squeeze into the bus without much trouble. 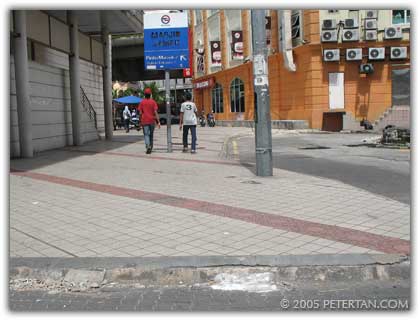 The day after I got back from Tokyo, Wuan and I went for a wheelabout beginning from the Masjid Jamek Star LRT Station to Dataran Merdeka. The roads and walkways were uneven and access to walkways was near impossible because the kerbs were too high. Where there were ramps to the walkways, the gradients were mostly too steep. For a manual wheelchair user, going through these badly thought-out design was like going through an obstacle course. 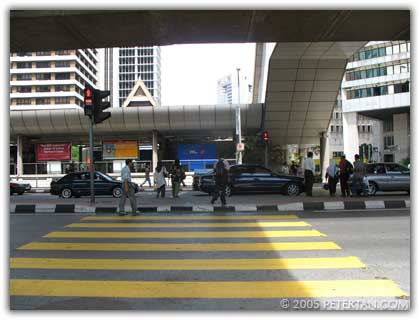 There is a pedestrian crossing from the Masjid Jamek Star LRT Station to the Putra LRT Station at Jalan Tun Perak. Again, it was near impossible for a wheelchair user to cross the road. The kerbs were simply too high. Even with Wuan helping me, it was a daunting task to lift my wheelchair up and down the kerbs so many times. Dewan Bandaraya Kuala Lumpur (DBKL) building glared down at us from the distance. 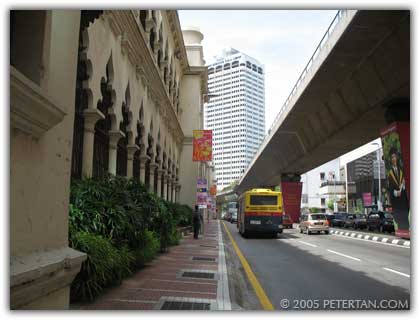 The narrow walkway with no ramp down at the other end.

One of my two main concerns during that wheelabout was going up on a walkway and then discovering that the other end was devoid of a ramp to get off. True enough, at the junction, Wuan, for the umpteenth time, had to lift my wheelchair down the road. We had to be aware of the fast moving traffic speeding by just inches away while doing that. That was part of my second concern – the fear of being knocked down by a vehicle. 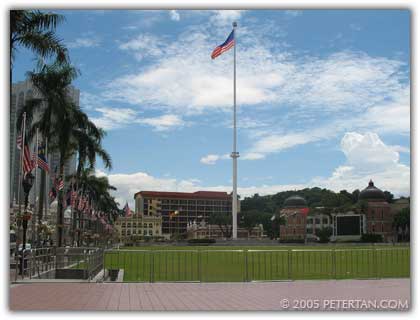 We finally reached Dataran Merdeka. I have never been there before. The sun was bearing down on us mercilessly. I was getting dizzy. My body was protesting against the extreme change of weather – from freezing cold the day before to the blistering equatorial heat. As I looked at the magnificient flag flapping in the wind, I thought how ironical it was that I felt unsafe in my own country each time I am out. One of these days, I may just get knocked down by a car or bus for using the road instead of the walkways. Do I have a choice anyway? 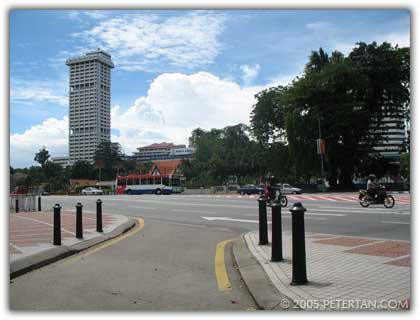 Were these ramps built with wheelchair users in mind?

Those are the few of many reasons why we do not see wheelchair users out and about. Accessible public transport is practically non-existent. Walkways and roads were constructed with no consideration for wheelchair users. Barrier-free facilities like these do not benefit wheelchair users only. With a rapidly aging population, we have to accept that age, disease and accidents will render this segment of people with mobility problems. They will greatly gain from an accessible environment and public transport, among others. From the looks of it, we still have a long way to go before ours become a barrier-free society for the mobility impaired.