One week after we collected the car, Christine passed the control kit to me. It had taken a circuitous two-week route from Singapore to Johor to Pahang and finally to Kuala Lumpur, passing through 5 hands before reaching me. Furthermore, the kit was manufactured in the USA. This journey is already a story worthy by itself.

The kit was stored under the sofa while I looked for a workshop to install it for me. At the same time, I asked around and checked with the Jabatan Pengangkutan Jalan on the process to get the hand control kit attachment inspected and approved, and also the procedure to get a driving license.

At times like that, the Internet is a veritable tome of information and contacts. I got the basic procedures to apply for a learner’s driver license from the JPJ website. One day in late-September, I asked The Snark via MSN if he knew a mechanic who could install the hand control kit. He said he could do that and promptly came to have a look at the kit on the same day.

On the Saturday of September 30, The Snark arrived with ShaolinTiger to install the kit. It turned out to be more than both of them had bargained for. Cars nowadays have more electronics and wiring stuffed into the small space around the steering column than cars of yesteryears. 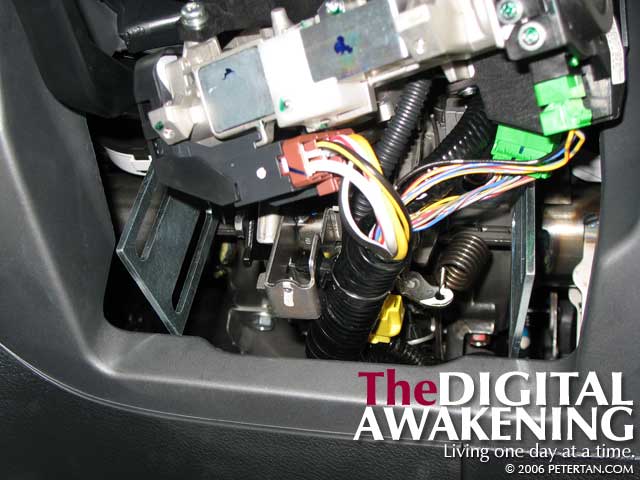 The brackets attached to both sides of the steering column.
Photo by Wuan.

After discussing with ShaolinTiger how they could best secure the brackets for holding the kit to the steering column, it was promptly bolted into place. However, The Snark had to leave to get ready for another appointment later that evening, promising that he would return the following week to get it all done.