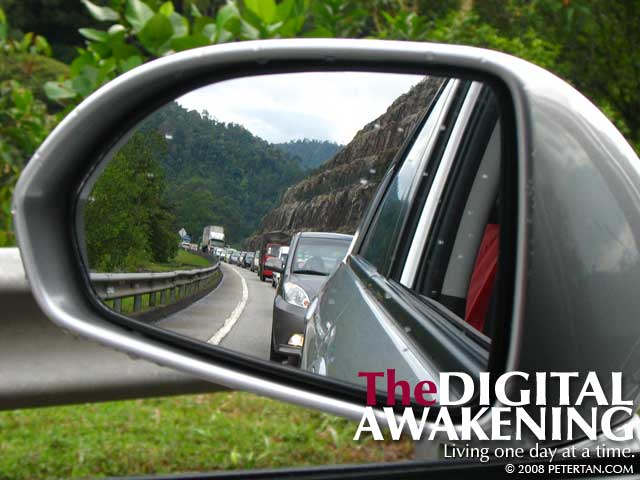 Throughout the year, I had this persistent nagging feeling that I have not done enough of what I had wanted to do. Sometimes, I tend to push myself too hard and set loftly goals that are difficult to achieve. As I pored through the archives, I realised that I had accomplished many things in my own way and at my own pace.

First and foremost, The Digital Awakening turned five in January. I started out blogging not fully knowing what I wanted to do with it and where it would lead me to. My blogging journey thus far has been a very interesting one. I would not trade it for anything else.

I was invited to speak at three national conferences with regards to disability. I gave two presentations at the 2nd Malaysian Conference on Rehabilitation. I turned down the other two speaking engagements because of time constraints for the first and I fell ill around the time the second commenced.

Healthwise, it has been a year of ups and down. Blood tests confirmed that I have alpha thalassemia trait. Apart from mild anaemia, it does not pose any significant health problems. The most recent creatinine count was 299 umol/L. That was in June. Another blood specimen was been taken December 26. I will get to know the results on my next scheduled check-up at UMMC in February.

The lump that I discovered in my scrotum was diagnosed as an epididymal cyst which the urologist said was nothing to be concerned with. It can be removed or left as is. I chose the latter option although I had wanted to go for the elective surgery earlier.

This year, we lost the three kittens successively that our cat Fei Por delivered in November last year. On one trip back to Ipoh, we adopted a white kitten that we named Cheeky from the veterinary clinic at Ipoh Garden. He is living up to his namesake by terrorizing the cockroaches that he could get his paws on. He is due to be neutered in January next year.

I voted for the first time in Penang during the 12th General Election. After Wuan casted her ballot here in Kuala Lumpur, we drove all the way up to Penang for me to cast my ballot and drove all the way back. This election is a watershed in Malaysian political history that saw four states changed hands from Barisan Nasional to Pakatan Rakyat. I had great hopes that the change of government would make the country more inclusive. Alas I have yet to see anything tangible.

Since I have decided to uproot from Penang to Kuala Lumpur, I had planned to put my apartment in Penang up for sale. To my dismay, I discovered that the task of packing up and moving all my belongings was a daunting task. Together with the sub-prime crisis that affected property prices, I have decided to hold on to it until the economy improves and I can get a better price for the apartment.

Lastly, I am enjoying marital bliss. Wuan and I will be holding our wedding banquet in Penang sometime next year. We have started the ball rolling by booking a restaurant two days ago. We are so excited about this. Planning for this is going to keep us occupied until then as we just realised that there are so many things that we need to do. And no, there is no shark fin soup in the menu!

Here is a toast to the closing of a wonderful year. May 2009 herald in more of the same. HAPPY NEW YEAR!