ONE VOICE By PANG HIN YUE

The Persons With Disabilities Act 2008 has been reduced to a mere administrative document. Who then can the disabled turn to for help?

UNLIKE previous seminars held at the Bar Council headquarters, there was a conspicuous absence of Special Branch officers at the recent talk on “Persons with Disabilities Act 2008: What Next?”

The Bar Council’s Human Rights Committee chairman, Edmund Bon, reckoned it was because the disabled community was perceived as “non-threatening”.

It may not have had the tension and drama that come with some of the more explosive issues that the Bar Council had attempted to address, but it was no less emotionally-charged. No less gut-wrenching, when participants shared how time and again they had been discriminated against by a system that was divided by the them-and-us polemics.

Among them was Christine Lee of Barrier-Free Environment and Accessible Transport (BEAT). Even though the Persons With Disabilities Act (PWDA) had come into force last July to accord equal rights to the disabled, Lee still found herself being discriminated against on account of her physical disability.

Just two days before the Bar Council meeting, she was invited to speak at a hotel. However, upon reaching the hotel, she discovered there was no parking space allocated for wheelchair users, forcing her to park her car at the VIP bay. The hotel staff warned that if she did, they would clamp her car. Sure enough, after her talk, she found her car clamped and was told to pay a fine.

“Why should I be made to pay for a service the hotel had failed to provide?” Lee asked. It was only after talking to the senior hotel management staff that they released her car without imposing a fine on her.

How ironic that Lee was penalised when the builders of the hotel had flouted the Uniform Building By-Laws by failing to provide facilities for the disabled. This incident underscores the fact that despite being touted as a rights-based law, the PWDA is silent on sanctions and penalties against parties that discriminate against the disabled.

As president of the Malaysian Bar Council Datuk Ambiga Sreenevasan noted: “There is no provision for any penalty for any party who does not live up to the obligations under the Act. In fact, (under Section 41 of the Act), the Federal Government is expressly excluded from any wrong-doing for any failure to address the needs of persons with disabilities.” 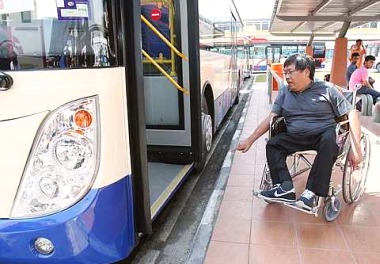 Access to public transportation remains a challenge for the physically disabled.

She added that although the Act states that persons with disabilities (PWD) have the right to enjoy the benefits of public transport, housing, education, employment and healthcare, it does not offer remedies if they face discrimination in these areas.

Bon admitted that many lawyers are unaware of issues confronting the disabled and urged the latter to bring their grievances to the law fraternity so that both parties could work together to push for equal rights for the disabled.

The participants testified that access to public transport, buildings and amenities remains the bane of the physically challenged. Even though it is compulsory for developers to incorporate features such as ramps and disabled-friendly toilets and car parks under the Uniform Building By-Laws, enforcement is sorely lacking.

Securing insurance is another mission impossible. For the learning disabled community that includes persons with Down syndrome, autism and attention deficit hyperactivity disorder, access to services to enhance cognition and to overcome sensorial problems, remains elusive.

The Special Education regulations under the Education Act, for instance, has a discriminatory clause that states only those who are “educable” are admitted to school.

Is it then possible to use the PWDA to compel the Education Ministry to amend the regulations?

Lawyer Helen Chin, an advocate for the learning disabled, pointed out that Section 28 of the PWDA states that persons with disabilities shall not be excluded from the general education system on the basis of their disability. “For the purpose of streamlining current legislation relating to special education, the term ‘educable’ should be deleted to avoid inconsistency and ambiguity,” Chin asserted.

Given the multi-faceted issues affecting the physically and mentally disabled, how is it that the PWDA seems to fall short of expectations? Perhaps the history of how it came about could shed some light.

In 2002, when representatives from various organisations were roped in to form a committee to draft the Bill, they rejoiced. They laboured over it for the next five years, raising salient points to be included in the Bill. Among them was Bathmavathi Krishnan, secretary of the Malaysian Confederation of the Disabled.

But to their dismay, when the Bill was tabled and passed in Parliament late 2007, they realised it had deviated from the original draft. “It was a very much watered down version of the original,” said Bathmavathi.

Thus the PWDA had been reduced to what she called, “an administrative document which merely imposes obligatory responsibilities on the various ministries to undertake certain actions to improve the lives of PWDs. Without any sanctions for non-compliance, it renders the Act almost ineffective.”

Lawyer Mah Hassan Omar who is president of the Malaysian Confederation of the Blind and who presided over the committee said: “The final version (of the Act) was far different from the original draft and people with disabilities were not fully consulted for the final document.”

Under the Act, the Minister of Women, Family and Community Development is vested with power to appoint a maximum of 10 persons whom she deems as having appropriate experience, knowledge and expertise to be in the National Council for Persons with Disabilities. The council also has members representing nine ministries, including the the secretary-generals of finance, transport, health, human resources and education. The secretary-general of the Housing and Local Government Ministry, strangely, is not in the council.

The council is expected to meet three times a year to review, recommend, implement and advise on various measures affecting the disabled. Towards this end, the Department for the Development of Persons with Disabilities will be created to assist the council in the areas of registration, protection, rehabilitation, development and well-being of PWDs.

While the Act is silent on protecting the rights of the disabled by way of imposing sanctions and penalties, it is explicit in shielding the council in that no party is allowed to take legal action against it.

Despite the hiccups, it is hoped that through other sections of the Act, there is room for the disabled to seek redress. Under Section 43 of the Act, the minister is given power to introduce regulations. It is hoped that through this provision, Datuk Dr Ng Yen Yen who took over the portfolio after the March 2008 election, will bring about the necessary reforms to make the Act air-tight.

Further, Section 13 states that the Council can recommend changes to existing laws or propose new ones to improve the lives of the disabled. “This area should be fully exploited,” stressed Bathmavathi.

She proposed that Article 8(2) of the Federal Constitution be amended to outlaw discrimination against the disabled. She urged the Minister in her capacity as the Council’s chairman, to institute Section 46 to amend the PWDA to include sanctions and penalties for non-compliance. And to ensure the Council acts without fear or favour, Bon proposes that a Shadow Council be established as well.

Although Dr Ng is barely one year into her new job, the burden is on her, being the key person vested with power under the PWDA, to do what is right for the 2.7 million PWDs in Malaysia.

* One Voice is a monthly column which serves as a platform for professionals, parents and careproviders of children with learning difficulties. Feedback on the column can be sent to
onevoice4ld@gmail.com.