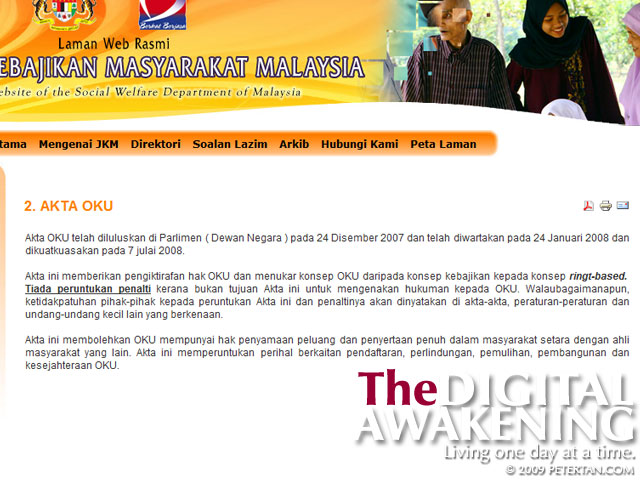 According to the Jabatan Kebajikan Masyarakat Malaysia (Social Welfare Department of Malaysia) website, the Persons with Disabilities Act 2008 (Akta OKU 2008) was passed in Parliament on December 24, 2007, was gazetted on January 24, 2008 and came into force on July 7, 2008.

Disabled people have been complaining that the PWD Act 2008 is purely an administrative act and toothless as there are no punitive measures for non-compliance or acts of discrimination. The JKM has a very interesting twist to these complaints that was published in the second paragraph of the same page in the website.

My translation of the above paragraph:

This act acknowledges the rights of disabled people and moves away from a welfare-based concept to the rights-based concept. There is no provision for penalties because it is not the purpose of this Act to punish disabled people. However, the penalties for parties not in compliance to this Act will be stated in other Acts, regulations and by-laws.

Wow! I am so relieved that disabled people will not be penalised under this Act. Penalised for what I do not know. Never mind that disabled people in Malaysia have been facing discrimination in society for as long as anyone cares to remember. Anyway, I have sent an email to the JKM to highlight this matter as I believe it is an error in phrasing the sentence. Hopefully, they will be more careful the next time they publish a commentary for something as important as the PWD Act in their website.