MY first brush with appreciating art was in 1999. I had just move into an apartment and thought it a brilliant idea to adorn the bare walls with framed watercolour postcards of old building facades. Those I thought would give the place I call home an ambience of a time long past when life was simpler. 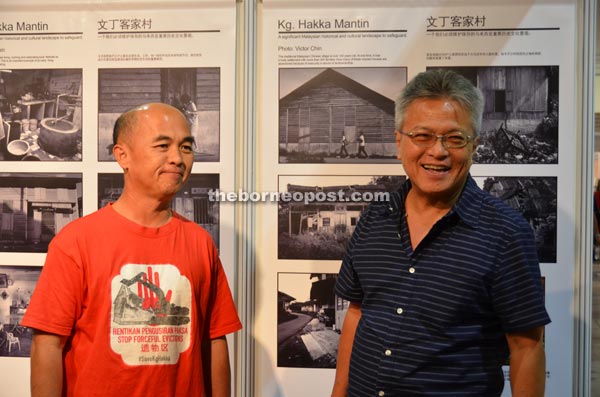 Six years after that in 2005, I was invited to an exhibition of photographs depicting disabled people from Malaysia and Thailand.

Unfortunately, I could not make it although I very much wanted to see how disability was depicted in the mainstream.

Fast forward to 2008. A friend invited me to the second instalment of the exhibition of photographs of Malaysian Paralympians called ‘In the Face of Disability’. At that time, I was deep into working on disability rights advocacy. I did not want to miss the opportunity again to learn more about the message and purpose behind those images.

That was where I met Victor Chin, the photographer for both series of exhibitions. I later discovered he was also the painter of the images in the postcards that had so captivated me nearly 10 years before that.

In that second series, Victor displayed images of the athletes in action and at rest in unpretentious poses. He illustrated that beyond the impairments are regular people with dignity, hopes and aspirations and that, in a world that values ‘perfection’, people deemed imperfect can still excel over and above expectations.

It is hard to believe the serendipitous build-up that led to our first meeting and what happened afterwards was not pre-destined. We became fast friends discovering that we shared mutual interests in photography and advocating on social issues. Despite his busy schedule, we often got together to catch up over hearty meals and discuss projects that we could work together on.

Victor, my wife Wuan and I have since held a joint exhibition on a macabre topic yet one that was close to our hearts. We each contributed 20 photographs respectively on the death of my mother and his. Aptly titled ‘Exits – The Mystery of Death’, the exhibition ran for four weeks at the Kuala Lumpur Performing Arts Centre.

Victor is a great mentor who is always generous in sharing his knowledge. He taught us the finer points of organising an exhibition and to curate the photographs that tell a strong and meaningful story. We were heartened by the responses from visitors to the exhibition who found meaning in the images we shared.

As I got to know him better, I learnt that he is more than a renowned painter, photographer and writer. Among the other hats that he actively wears are historian, heritage conservationist and activist for oppressed communities.

At the Kuala Lumpur Photography Festival last week, Victor gave a talk and displayed a series of black and white photographs of Kampung Attap in Mantin, Negeri Sembilan, in what he named ‘Photography: An act of resistance’.

The village is also known as Kampung Hakka, owing to the fact that the majority of the population are descendants of Hakka immigrants who came to work in the tin mines and settled in the area more than 100 years ago.

The land the village stood on is slated for development. The villagers have been asked to vacate the houses they have lived in for generations. According to Victor, there used to be 300 families in its heyday but now only 30 families are still living there — adamant to stay on and fight the eviction that they feel is unjust and improper.

Ten houses were forcefully demolished by the developer last year — four of which were still occupied at that time. Villagers and activists who stood shoulder to shoulder to prevent the destruction were arrested by the police.

“This is the situation that attracted me to Mantin. I am not from there. I am not in any way related to any of the people in the village,” Victor shared about how he got involved in the issue.

“When I saw this on social media, in the newspapers and on television one year ago, I visited the village and then again with some friends.”

Together with the villagers, Victor and friends formed the Rakan Mantin Facebook Group. The group describes itself as “a community initiative to promote and to protect historical and cultural landscape from indiscriminate destruction”.

“Photography can do many things. It depends on what you want your photographs to do,” Victor told the audience listening attentively at the talk.

“I am using photography as a tool to express resistance, to express opposition, to express the feelings of the people in Mantin that they are not happy with what is happening and they want to change it.”

He spends most of his weekends in the village organising and overseeing events to document and introduce a fast fading village lifestyle to urbanites and those who have never had the chance to experience it.

Visitors and participants of various event organised by Rakan Mantin are encouraged to preserve the village for posterity with their cameras and through other media. They can then contribute their works to the Interpretative Centre set up in one of the houses in the village where stories, artefacts and other materials are collated and chronicled as joint narratives for the benefit of future generations.

During a lull of visitors at the exhibition booth where his photographs were being displayed, I remarked to Victor that he is a man on a crusade fighting for the downtrodden. In response he said, “No, I am not on a crusade but an artist with a conscience.”

That he undoubtedly is, doing it at his own expense unconditionally most of the time for the common good and for safeguarding the historical and cultural values that many of us have little inkling of until then. Along the way, he has made allies of strangers and roped friends into causes we would otherwise not get involved in.

From promoting the understanding of disabled people, to preserving urban heritage buildings, to helping villagers on the brink of losing their homes, he has never shirked from doing what he believes is morally and ethically right. Victor’s application of art activism has certainly given fresh perspectives to social issues with the use of alternative approaches in promoting and supporting those causes.