Hospis Malaysia provides palliative care for people with terminal illnesses. The National Cancer Society of Malaysia Penang Branch and the Penang Hospice Society were of great help by providing palliative care to Mum when she was dying from leukemia. I would not be able to manage looking after Mum had they not come into the picture during those last few months.

Please support this noble event so that Hospis Malaysia can continue to provide palliative care to people who need it. You can contribute by buying a ticket worth RM20 that entitles you to:

Map to the venue: 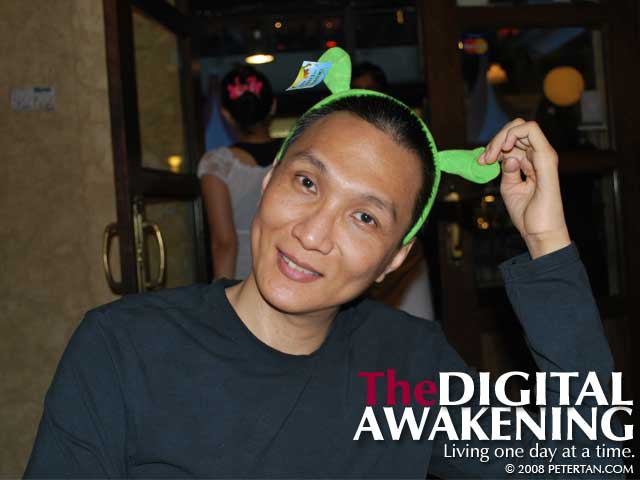 Clowning around with the Shrek ears hair band that came in the goodie bag at the AllMalaysian Bloggers Project (AMBP) Smashin’ Gathering for Bloggers held at Cineleisure in June. I am looking forward to the next gathering already. Guys?

BLOGGERS gathered for a day of networking and sharing at the second All Malaysian Bloggers Project (AMBP) jointly organised by The Star Online and Cinema Online recently.

The project was aimed at providing bloggers in Malaysia a platform to share their thoughts at a get-together instead of just via online communication.

“We started off as a pilot project sometime last year but things kicked off in January. We changed the look of our website and a lot of sponsors began coming in.
Giving his views: Tan (in wheelchair)sharing his thoughts about blogging on disability issues.

“Today, we have more than 2,000 bloggers from all over Malaysia registered with us,” said Fredericks during the gathering at the Outpost Café in Cathay Cineleisure in Mutiara Damansara, Petaling Jaya.

He said the first gathering that was held at The Gardens in MidValley had been a more informal meet.

Aizaruddin said he had been blogging since 2001, long before blogs became popular.

“Project Petaling Street (PPS) was started in 2003, and we celebrated our blog’s fifth anniversary on June 5. We have over 9,700 members registered with us,” added Aizaruddin.

He said any blogger could inform PPS to highlight it in its blog.
Perks: Low said the perks that came with blogging included getting to try products and services for her reviews.

“In short, it’s like a snapshot for people to see what it is going on in the Malaysian blogosphere.

“It’s convenient and easy for those of us who are lazy to surf what others are writing about in other blog sites.”

Tan spoke on how blogging helped him advocate effectively a cause he believed in – the rights of disabled people.

“The public don’t really see many of the disabled people in the city because the environment and public transport is not made accessible to them,” said Tan, a disabled person himself.

“I know of airlines that don’t accept the disabled.

“Those that do, meanwhile, require us to sign indemnity forms whereby we cannot sue the airline in the event the craft crashes or some other untoward incident occurs.

“Why the need for such conditions when disabled people pay the same airfare as everyone else?” he asked.

Tan said blogging allowed him to disseminate information with ease and reach out to people who were in the dark about disabled issues, as not many reports on this could be found in the mainstream media.

“It also provides unlimited space for us to give more radical views about a certain situation which is sometimes not reported in the mainstream media,” he added.

Low said she loved the perk of being able to forge friendships quickly, and getting to sample different products for reviews.

“I feel your personality shines through when you blog. It’s exciting to have a voice and be able to draw people to listen to you!

“The power of blogging can actually evoke thoughts and influence people to discuss a topic that you have written,” said Low.

She however, feels that blogs should never be used as an avenue to make baseless claims or to cause harm to people.

Cinema Online editor Chin Vin Sen and Rohan Thomas of Microsoft, which was one of the sponsors of the event, were also present to share tips about usage of popular social networking website Facebook.