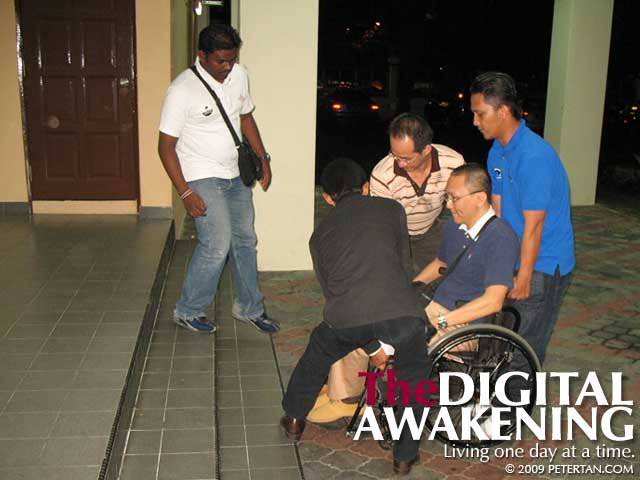 Peter Tan being carried up two steps at the Dewan MPAJ Pandan Indah.

MPAJ organised a briefing on the Local Draft Plan for residents of the Teratai state constituency. It was held at the Dewan MPAJ at Pandan Indah. This local draft plan was for the development of the Ampang Jaya municipality for the next ten years. ADUN for Teratai Jenice Lee had informed me about this briefing. My main interest in this matter is to see if accessible facilities are included in the draft. 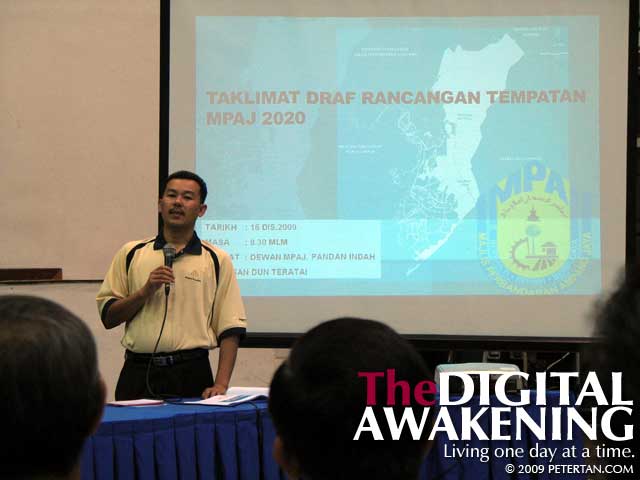 The first inkling that it was not going to be plain sailing was when I discovered that the Dewan MPAJ did not have an access ramp into the hall. There were only steps and I had to be carried up together with my wheelchair. MPAJ will get to hear from me real soon regarding this matter. There is no reason whatsoever not to provide access in compliance with the Uniform Building By Law 34 when MPAJ itself is the authority enforcing this on all public buildings. 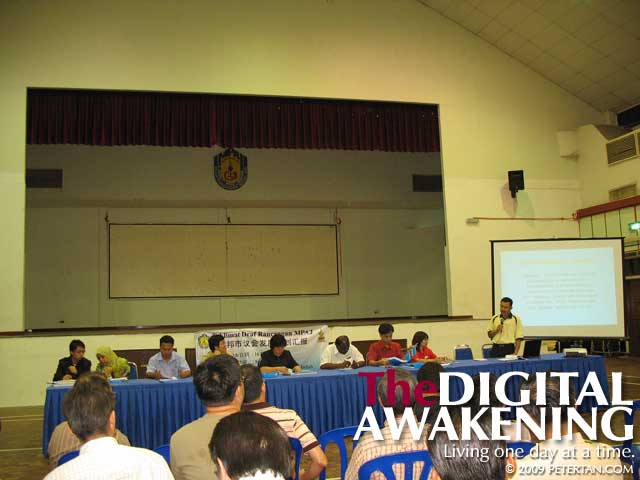 ADUN for Teratai Jenice Lee and MPAJ Councillors of the Teratai state constituency at the briefing.

When the forum was opened to the floor after the briefing by MPAJ Town Planner Awang Mustapha, I asked if the local draft plan includes provision of accessible facilities. It came as a shock to me that there were none according to Awang although such facilities were included in the guidelines for the draft. He promised to take this matter into account. 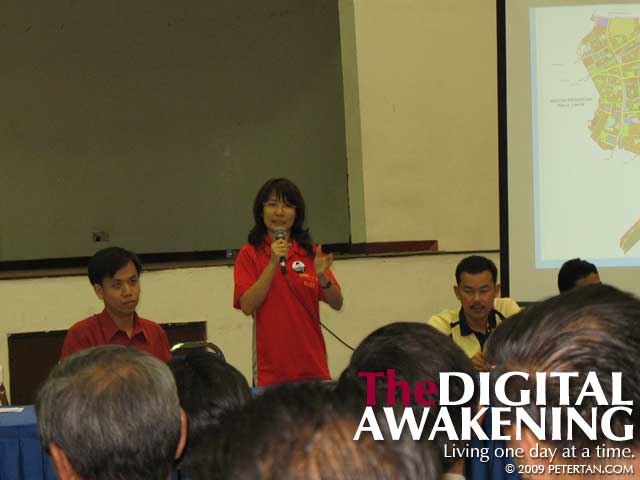 I was even more displeased when Councillor Chan Su San informed the floor that she did emphasise that accessible facilities should be included in the local draft plan during council meetings on the matter. I thought that MPAJ have understood that the municipality barely have accessible facilities and that after the seminar and dialogue with disabled people and the announcement by the Yang Di Pertua at the disability awareness training, such issues whould have been given more attention. Unfortunately, I was mistaken. This oversight is prevalent in local governments all over Malaysia. It is all talk without substance. 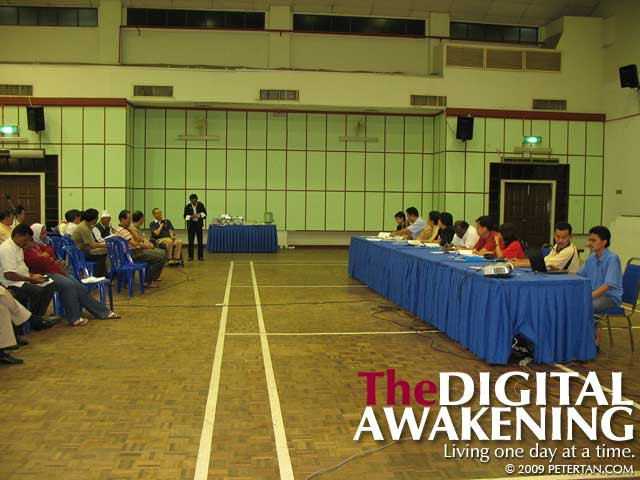 Peter Tan asking about the accessible facilities in the Local Draft Plan.

It is very disappointing that a plan as important as this, even though at the draft stages, excludes the needs of disabled people, especially after all the advocacy activities we have initiated with MPAJ. I hope there will be more ADUNs like Jenice Lee and councillors in MPAJ like Chan Su Sann who understood the importance of such facilities and speak out on behalf of disabled people who do not have a representation in the MPAJ. 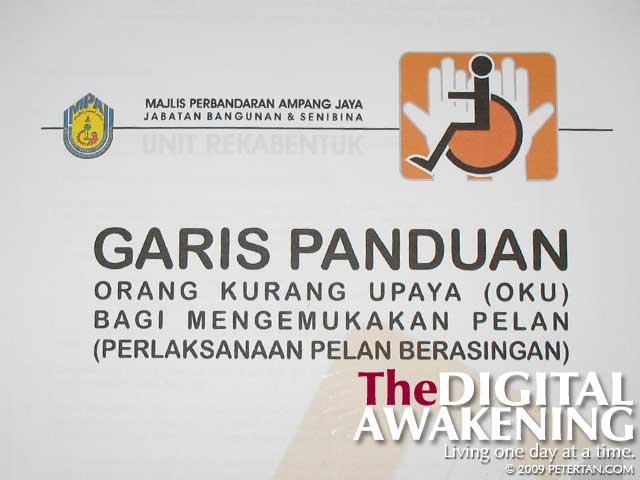 That aside, I am glad that disabled people have come to this stage in our advocacy for accessible facilities in the Ampang Jaya municipality. This is a very positive step for many of us who have been looking forward to such facilities. The guidelines have a checklist and specifications on ramps, pathways and corridors, stairs, doors and entrances, elevators, toilets, lobby and car parking spaces.

The most important aspect of this implementation is the requirement for the submission of a separate plan for accessible facilities. This is to ensure that the plans comply with Malaysian Standard MS 1184 before they are approved. This guideline left out Malaysian Standard MS 1183: Part 8: 1990: Specifications for Fire Precautions in the Design and Construction of Buildings Part 8: Code of Practice for Means of Escape for Disabled People which I feel should have been included.

Teratai ADUN Jenice Lee, MPAJ Council Member Chan Su Sann and MPAJ Jabatan Belia dan Masyarakat Officer Noryani Roslan have been instrumental in pushing this matter up to this stage. Nevertheless, I will raise a few points regarding the guideline as I feel that the requirements are not comprehensive or specific enough. All said, I am happy to see progress in this matter although the moving is slow from the first time I lodged a complaint with MPAJ in 2006. 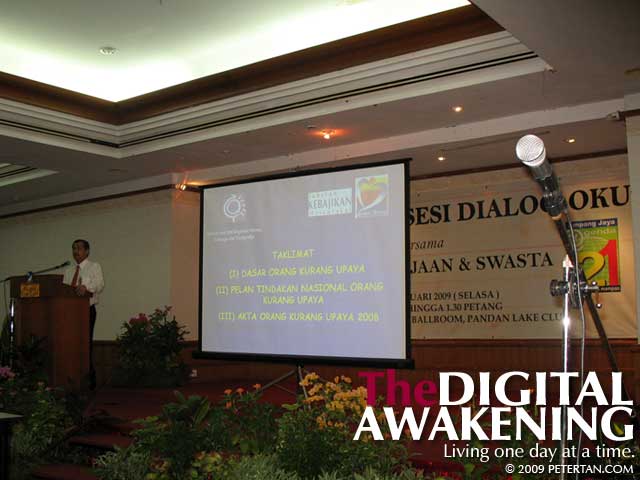 Tuan Abdul Hamid Hussain delivering his speech at the seminar and dialogue session with disabled people, government agencies and the private sector at Pandan Lake Club.

Basically, my presentation touched on the inaccessibility around Pandan Perdana and Pandan Indah, which is within the municipality of Ampang Jaya, and why there is a need to rectify this problem. I have been a wheelchair user for 25 years and sad to say, the built environment in Malaysia is still as inaccessible now as it was then. Hopefully, something positive will come out of this. Disabled people have been marginalized for so long that many of us do not really know the true meaning of liberty anymore.