THE next time you cross paths with disabled people and have the strongest urge to stare and think what a pitiful sight they are, stop and look at their faces. Behind those facades of normality are pain, struggles and uncertainty no one else can truly comprehend.

For every story of disabled people who have overcome great difficulties to make something out of their lives, there are many others who are still grappling to come to terms with their conditions and also others who are fighting hard to be included and accepted in society.

There are also others who simply gave up on life after they became physically impaired. They were unable to accept what they considered a cruel fate that life dealt them. In the time before I became actively involved in disability-related training, I provided peer support to a few of them. I regret not doing enough to convince them that life could still go on meaningfully in spite of the impairments and difficulties they had to live with.

Theirs are stories I seldom share not because they are unworthy tales but because the emotional turmoil within them were ugly and frightening. After our accidents, we all go through that same struggle of being extremely optimistic of walking again one day and totally giving up hope and wishing for a quick end another day.

The one case I remember most was of a young man who was barely in his 20s. The late Diana Khoo, a social worker with many years of experience in the field of community rehabilitation, had invited me to go with her to provide peer support to him. The son of her acquaintance, he had spinal cord injury from a motorcycle accident and had become paralysed from the waist down.

The journey took us one hour by road and another 20 minutes through unpaved tracks deep inside a village in the rural outskirts of Penang island. The single-storey house was on the fringe of a jungle and appeared to have been recently built.

An elderly woman next door let us in. She told us she was the young man’s grandmother. The interior was sparsely furnished. He was resting in his bedroom. We exchanged pleasantries but it was obvious from his abrupt responses our presence was not exactly welcomed.

His mother had sought Diana’s help because she saw that he was demotivated after his discharge from hospital. He had refused to listen to her, refused to go for treatments and therapies, and refused to do anything for himself. She was at her wits’ end to help him get back on his feet again.

“Your mother told us you are able to stand. Can you show us?” Diana asked, trying to get him to open up.
He was keen to show us what he could do. With the walking frame positioned beside his bed, he struggled a little and pulled himself into an upright position.

“You are in a better shape than me,” I told him. “You can stand like this. I cannot. Why not go for occupational therapy so you can become even more independent?”
He sat back down and ignored my suggestion.

Then we talked about how his mother was doing as much as she could despite the circumstances. She had to work and at the same time worried about him. That was when he unexpectedly exploded in a tirade of rage.

“You are not me. You will never understand. Have you ever been poor? I had this accident. I cannot walk. My father left us. The previous house we lived in got burnt down. I cannot do the things I want to do now.”

We listened in silence as he went on and on about how unfortunate he was and that it would have been better if he had died in the accident. There was so much anger in him that we found surprising. That emotion must have been festering inside him for some time already. In order not to antagonise him further, we made some small talk and took our leave.

I never went back to see him again after that. He rebuffed further efforts to reach out to him. When I asked Diana about him a couple of years later, she told me he had passed on due to complications related to his paralysis. He could not get over the fact that he had to live with paraplegia for the rest of his life and refused to take proper care of himself.

There is only so much family members and friends can do to help in situations like these. Ultimately, the person must want to move on in life in the face of surmounting challenges. Apart from dealing with the emotional roller coaster caused by the sudden loss of limb and other bodily functions, there are also misconceptions and prejudices of society to deal with, and not forgetting the obstacles in the built environment.

It is not easy to overcome these trials and tribulations but not impossible either. The disabled people you see out and about in public places have done it or could still be struggling with some of these issues. What is important is that they have not allowed their impairments to stop them from leading a meaningful life. They put in effort to break personal and societal barriers and never gave up hope. They still found satisfaction in living.

So when you see disabled people in the street, instead of gawking, try to picture the long journey of determination and courage they had taken to get to where they are now. They are fighters. They are the people who never surrendered. They are the true survivors of the toughest challenge life can dish out.

The Japan International Cooperation Agency (JICA) and the Department of Social Welfare Malaysia organised a 2-week workshop on Disability Equality Training from 8th to 19th January. This workshop, facilitated by Dr. Kenji Kuno, Senior Advisor on Social Security and Disability for JICA, was the 2nd Regional Asia Pacific Training of Senior Trainers (TOST) and 3rd Regional Asia Pacific Training of Trainers (TOT) to be held in Malaysia.

Twenty participants from twelve countries in the Asia Pacific region, including five from Malaysia, underwent training on the understanding of disability and facilitation skills. The countries represented were Vietnam, Laos, Myanmar, Cambodia, Timor Leste, Pakistan, Sri Lanka, China, Philippines, Samoa and Japan. The TOST ran concurrently with two participants from Malaysia who also doubled up as co-facilitators of the workshop. They were Nurul Huda Zainal from the Department of Social Welfare Malaysia and Fariz Abdul Rani from JB Prosthetic and Rehab Supply in Sabah.

Although I was the co-facilitator supporting the learning of senior trainers and trainers, I learnt a lot from the participants and Dr. Kuno as well. The most empowering moment in the entire workshop was seeing the participants rewriting their life according to the Social Model of Disability. They were struck with the realisation that their impairments were not the cause of them being disabled. Rather, the hardships that they faced and marginalisation from society stemmed from attitudinal and environmental barriers.

It was a privilege to be part of the transformation of the participants into DET trainers. Their perspective of disability and themselves as disabled persons will never be the same again. Disability is more than what we see in a wheelchair user or a blind person. It is an issue that involves so many aspects of society and requires the involvement of all levels to resolve. All of them now have the knowledge and skills that they can put into practice to make their own respective societies more inclusive.

To date, the Project to Support Participation of Persons with Disabilities by JICA, which DET is part of, has produced 153 trainers from 18 countries across the Asia Pacific, Africa and Latin America. Even with so few trainers spread across several continents, attitudes towards disabled people have changed. The public and private sectors in these countries have engaged DET trainers to conduct workshops in their organisations to better understand disability issues and work together to resolve them. 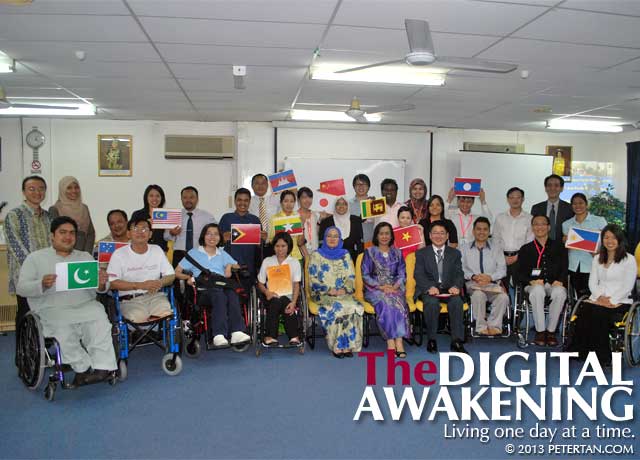 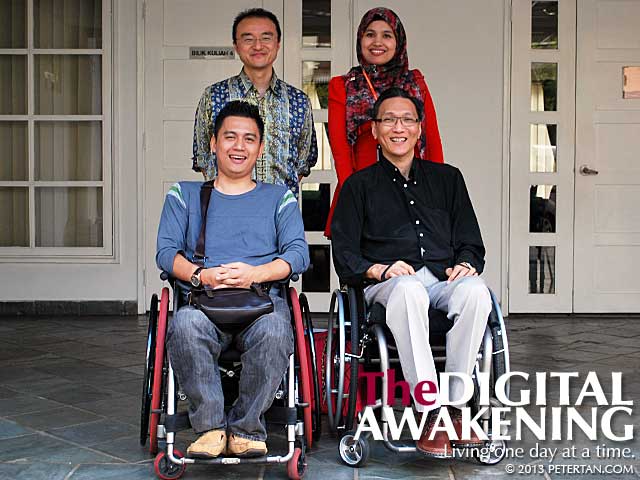 Instead, I reflect on what I have done so far with what I have and what I can be. Life is too short to be wondering about what could have been. Searching for a purpose in life was difficult in the beginning. It took a lot of hits and misses for me to discover what I wanted to do and one that I could do well in. Blogging was the first step. Then I had the fortuity to make friends with people who nudged me in the right direction. Kuan Aw and Christine deserves all the credit for being the wind that filled my sails when I first set out from the harbour.

Dr. Kenji Kuno of the Japan International Agency (JICA) gave me every opportunity available in his collaborative projects with the Jabatan Kebajikan Masyarakat since 2005 to learn about Independent Living Programme (ILP) and Disability Equality Training (DET). My perspective on disability and rights of disabled people are shaped by the philosophies and principles propounded in these courses. I am now a senior trainer for DET and resource person on ILP because he gave me many opportunities to learn and put them into practice.

Wuan is instrumental in encouraging and supporting my work in disability advocacy. Without her, I would not be able to do so much. I may be independent but I still need assistance with my activities of daily living. Wuan helps me with that and that makes it convenient for me when I am out and about. Even at home, my life is easier because she makes sure that my needs are well looked after before she goes to work and after. She is always there for me. Indeed, she has been my pillar of strength since the beginning of our relationship.

On this anniversary, I want to celebrate these wonderful people who have come into my life and made a difference in so many ways. I am who I have become today because they have been generous with their kindness. They have proven that disabled people, given the opportunity and support, can achieve much more than we are made to believe. I am that irrefutable proof.

The road ahead may still be long but because of the foundation that they have helped me build, I am now doing work that is not only personally fulfilling but one that has the potential to change society for the better. To them, I want to say a big thank you from the bottom of my heart. My life is all the better because of you.