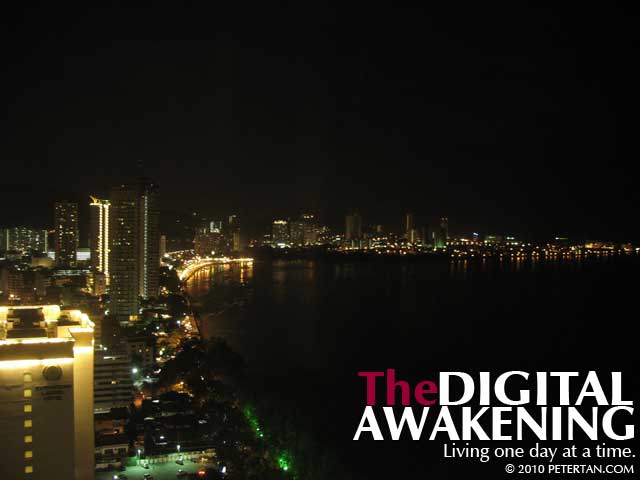 View from our room – Gurney Drive by night.

So much has changed yet so little that I have forgotten about this place. The road is an unceasing torrent of traffic now. The roadside burger stalls with their mouthwatering aroma have long disappeared. Towering skyscrapers stand on plots where grand mansions used to occupy. These are not what Gurney Drive used to be, not how I have remembered it.

Nonetheless, the familiar sights and sounds and sensations are still there. The sea wall, the casuarina trees, the waves lapping against the narrow stretch of sandy beach and the salty taste of humid breeze greeted me as Wuan and I strolled along the seafront promenade. All these are gentle reminders of how much I used to love coming here to just free my mind from all the cares of the world.

They say, “Absence makes the heart grow fonder.” How true that is. I have not been back to Penang since Chinese New Year. That is about four and a half months only. I thought I could just leave like that when I decided to uproot and settle down in the Klang Valley. I thought I could let time dilute my fondness for this island where I was born and grew up in. That is not to be. I miss Penang so much today.

I guess Penang will always draw me back, no matter where I go to. Never mind the mad traffic jams, never mind the lack of accessibility, Penang still has that pull on me. The people, the conversations, the food, the sights, the sounds – there is nothing quite like it anywhere else. I may not call it home anymore but it is irrefutably my hometown, my kampung, wo de jia xiang.

In the late sixties and early seventies, we stayed in a rented room near the Kek Lok Si Temple in Ayer Itam. The room was one of three in a wooden house with a big compound. There were three windows but only one was opened. It looked out into the compound. “Bar lay”, a raised wooden platform, occupied two thirds on the left side of the room. Mengkuang and straw mats lined the platform. Items that were seldom used were kept in carton boxes underneath.

A two-door wardrobe and two smaller cabinets stood on top of the platform. Our clothes and other important documents were kept inside these cabinets. The platform doubled up as our bed too. Mum would roll out the cotton-filled mattress when we were about to turn in for the night. After that, she would string up the four edges of the “bang ta” (mosquito netting) and we would crawl inside to sleep.

There was another small cupboard on the floor with a metal oscillating fan on top. We had our meals on a round foldable table which she cooked over a gas stove in the kitchen at the back of the house. Rice was cooked in an electric cooker in the room. Two formica chairs rested on the wall beside the table. That was for guests who visited us ocassionally. I know Mum had a sewing machine that she used to make pillow cases, bedsheets and pajamas, but I cannot remember where in the room she placed it.

Mum sought permission from the landlady to rear chicken, and sometimes ducks, too, on one corner of the compound where she built an enclosure. Just outside the enclosure, banana trees grow on fertile blackened soil. These were from burning garden debris – dried leaves, twigs and branches pruned from trees in the compound. She built the enclusore and coop by herself mostly, from putting up the chicken wire fence to building the rickety coop for the birds to rest in the evenings. The coop had a place for the birds to perch inside.

She also made the trough for the feed by sawing planks to size and nailing them together. The birds were fed with a mixture of corn kernels, oat groats, chopped green vegetables, mashed steamed fishes and finely ground chicken feed. The green vegetables and fishes were discards that the grocer would sell at a very cheap price. Sometimes, when she was tilling the soil and found earthworms, she would chop them up as well and fed them the poultry. The birds drank a lot. Mum filled up discarded glazed saucers with tap water for them.

The birds were fed twice a day – once in the morning and once in the evening. If there was leftover rice, they were added into the chicken feed as well. Once in a while, when Mum was busy with other chores, she would get me to feed them. It was not something I liked. The enclosure was full of chicken droppings. The yet to be neutered cockerels would sometimes attack me when I got too close to them.

The grains were bought from the sundry shops around the market, the ground chicken feed from the small livestock supply store beside the bridge over the Ayer Itam River opposite Swee Wah Mini Market. The medicine for livestock inside the store were arranged on shelves and made it smell like a hospital. The chicken feed were pre-packed in brown paper bags. She would buy two or three packets whenever she dropped by at the store. Otherwise, she would get them from the sundry shops that sold them loose and by weight.

The locals call the area around the bridge “keow thau teng” meaning the place above the bridge head. Underneath the bridge, on both banks, garbage from the market and houses along the river created an eyesore. There were animal carcasses, too. At the other end, on the same side as Swee Wah Mini Market, there were stalls selling curry noodles, hokkien mee and delicious Nyonya kuihs. I liked the kuih talam best for its sweet and salty taste, and pandan fragrance. On the opposite, there was a small stall selling uniforms, stationery and such. What I remember most about this stall is the bak hu (pork floss) that was kept in a huge glass jar. I would pester Mum to buy some for me everytime we passed the stall.

In the morning, vendors displayed chicken and ducklings in open top wood cartons on both sides of the walkway on the bridge. Mum would be at the market by seven when it was at its busiest. She squatted by the boxes, looked for the healthier birds, gently held those little yellow fluff balls and turn them over to determine their gender. I would squat beside her and tried to grab the chicken with my small hands. She would stop me. She said the chicken would die if I were to drop them.

The chicken cost 30 sen each, ducklings slightly more expensive. She usually bought ten at one go. The selected chicken were put in flat bottom paper bags made from newspaper. They would be struggling and chirping away inside. Mum would put the paper bags in her “chai na” and continue with her marketing. The “chai na” was a weaved bamboo basket, cylindrical with an arched handle. It was used mostly for carrying groceries from the market. These have since been replaced by plastic ones like those found in supermarkets.

The poultry were kept for festive seasons like the Chinese New Year and Dong Zhi (Winter Solstice Festival). There were more hens than cockerels. The hens were for meat and eggs. The cockerels were neutered to make them grow fat. They were called “eam kay”. When the cockerels matured, Mum took them to her father, my Ah Kong, for neutering. They would balloon up afterwards and slaughtered for extra special occasions like the birthday of an elder in the family.

The neutered rooster, called a capon, was also prized for its fat. “Eam kay eu”, as it is known, was removed and placed in a glass bottle before the carcass was washed to prevent contamination. It would then be preserved in salt and used as a lubricant to remove splinters in the skin. The few times I had stubborn splinters embedded in my hand, Mum would wrap the wound in the salted fat for a few minutes. The splinter could then be removed with little effort.

Mum slaughtered the chicken herself. She would slit the bird’s throat and let the blood drip into a bowl. The carcass was then soaked in a pail of boiling water. This made it easier for the feathers to be plucked out. Most of the entrails would be discarded except for the gizzard. It was supposed to be a delicacy – steamed, sliced, dipped in soya sauce and eaten just like that. I never liked the gizzard for its unusual taste and texture.