Report for the KUB (kidneys, ureters and bladder) ultrasound done on December 27, 2010 at UMMC:

Findings:
Comparison made with previous ultrasound dated 11.2.2010.
Both kidneys are increased in echogenicity. Right kidney measures 8.6 cm in bipolar length and left kidney measures 9.1 cm in bipolar length. A small cyst is seen in the right kidney, measuring 0.5 x 0.5 cm. No renal calculi or hydronephrosis. Urinary bladder is underfilled and the wall is trabeculated.

Generally, I would say that there is little change from the previous ultrasound. That is good news for now. Together with the slightly better results for the renal profile done on August 2010, I am happy. These are good news to close the year with.

They may be mere digits on the monitor but they tell a lot. They determine my life’s direction, whether I take the right fork or the left. One will be a journey longer than the other. Where one prolongs, the other hastens. Inexplicably, both will lead to the same conclusion at some point in time. There is no escaping.

I wonder how I will choose when the time comes. I am glad I do not have to make that choice yet, or so I thought. The 3 digits that mattered most were 294, 294 umol/L creatinine that is, from the blood sample taken in December 16, 2009 as compared to the previous serum creatinine count of 299 umol/L, according to the attending doctor this morning. The KUB (Kidneys-Ureter-Bladder) ultrasound done in February 11, 2010, as expected, showed little change from the previous report as was confirmed by the radiologist when I asked her, which is a good thing.

As I went through the entry on my renal profile and KUB posted on June 2, 2009, I discovered suspiciously similar results, 294 umol/L for the latest results as compared to 299 umol/L for the previous. Surely, there is a mistake somewhere. The blood test results before the sample taken in December 16, 2009 should show 294 umol/L and not 299 umol/L.

Thinking back, I guess I have an idea of what happened. The blood sample taken in December 16, 2009 must have been misplaced somewhere along the chain of process. It was not extracted at the laboratory as is the usual procedure but at the rehabilitation clinic. Therefore, what I thought was the result for the December 2009 sample was in actual fact from May 2009. There is no result from December 2009.

I assumed. I was mistaken. I guess the doctor who attended to me this morning did not know a test was ordered to be done in December 2009 by another doctor. Somebody messed up my blood test but I am not going to pursue this. Anyway, the doctor has ordered a renal function, liver function, lipid profile and blood glucose be done before my next appointment in August. Till then, there is no reprieve for me yet. 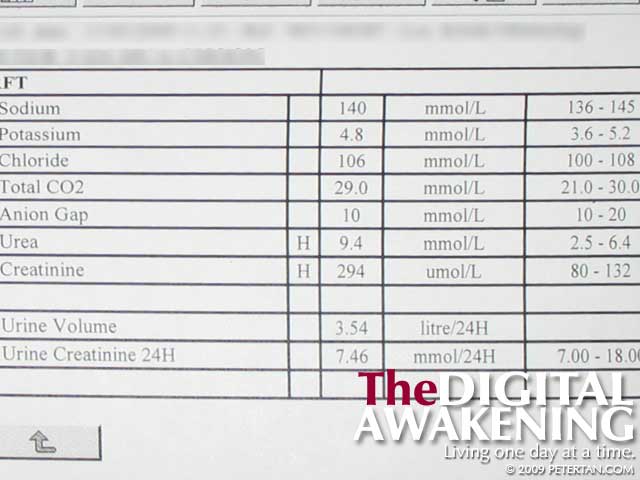 Every quarter, I go for a medical review at the UMMC Rehabilitation Clinic. The most recent was last Wednesday. I had a blood sample taken, sent in 24 hours worth of urine and had an ultrasound done on my kidneys and bladder two weeks prior to that.

Like all other reviews before that, I always approach the appointed day with trepidation. Would the blood tests show further deterioration of my renal function? I go through this period of nervousness without fail every time. What I fear most is impairment to my kidneys will come to a stage where I need to undergo dialysis thrice weekly.

The results for the renal profile the creatinine level at 294 umol/L. That is not much different from 299 umol/L for the specimen taken on December 26, 2008. I am still studiously adhering to a low-protein diet regime for most days save for the occasional indulgence. The figures for the 24-hour urine creatinine was within range. The ultrasound of my kidneys showed the size of the right kidney at 8.9mm and 7.9mm for the left kidney. They are small compared to healthy kidneys.

The review this time has shown that there is progress in the impairment although slower than I had anticipated. This is positive news no doubt. What I need to do is to keep up with the low-protein diet, take the once daily Detrusitol SR 4mg religiously and perform clean intermittent catherization (CIC) as scheduled, and pray that this pair of impaired kidneys will sputter on till my time is up.