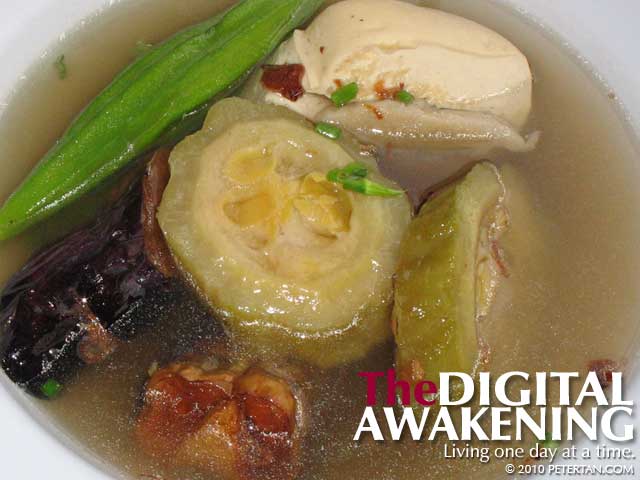 If there is anything about Mum’s cooking that I miss most now, it is her nyong teu fu. That is yong tau foo in Hakka. The ones she made were as authentic as they could be. I have yet to find one done they way she did them. I have eaten what were claimed to be Hakka yong tau foo but they do not taste the same, not even close. For the longest time, I have been hankering for those like Mum’s.

It is a blessing that Mum’s second sister, my Jee Ee, uses a similar recipe. Whenever I am in Penang, I would visit her at her home in Ayer Itam. She is my cousin Ah Huat‘s mother. I knew she knows the recipe but it just never crossed my mind to ask her, until yesterday.

I was going through some photographs when I came across some of yong tau foo that Wuan and I had when we went to Ampang Point recently. Coincidentally, I had also blogged about liking bitter gourd yong tau foo just before that. Some temptations are simply too difficult to resist. I picked up the phone and called Jee Ee and asked her for the recipe.

Just like Mum, Jee Ee does not quantify ingredients by weight. Two of this, half a catty of that, about twenty grains of this – I had a hard time following her. In the end, I only have a rough idea of how much each ingredient should be. Most importantly, I got an inkling of what the two secret spices are. These two spices made their yong tau foo unique in aroma.

One of these weekends, I am going to get Wuan to experiment with the recipe and see if we can recreate the flavour of Mum and Jee Ee’s Hakka nyong teu fu. It has been such a long time I have sunk my teeth into some. In the mean time, I will just have to make do with the Ampang yong tau foo from Restoran Foong Foong. They serve the best yong tau foo I have eaten so far, that is apart from the nyong teu fu that Mum used to make.