Of quacks and snake oil pedlars
by Peter Tan. Posted on August 17, 2013, Saturday

“WHAT is wrong with you?” a stranger asked as I passed by him outside a shop. He had been observing me from a distance.

“There is nothing wrong with me,” I responded, feigning ignorance. I already knew where the question would lead to.

Unperturbed by my answer, he followed me from behind and fired a barrage of questions, “Why are you using a wheelchair? You cannot walk? What happened?”
Before I could answer, he continued, “I know a sifu who can treat you. He has treated many people like you. They could walk again after six months of treatment.”

“Thank you. I am not interested,” I declined politely and pushed my wheelchair a little faster to shake him off my back.

“You do not want to walk again?” he shouted after me.

It was not that I do not want to walk again. I was simply tired of the same rigmarole strangers, well-meaning relatives and friends put me through all the time. They all knew of someone who could make me walk again and insisted that I try the treatments whether I liked it or not.

Do not get me wrong. I am grateful for the people around me who care for my well-being. However, their persistence in recommending treatments can be off-putting. They saw my impairment as a condition that had to be corrected and took it upon themselves to dish out unsolicited advice.

There is also a reason why I am wary of these word of mouth recommendations. In the early years after my accident, my parents, in their haste to get me back on my feet, spent a small fortune on alternative treatments after I was discharged from the hospital.

They engaged Chinese sinsehs (traditional Chinese physicians) recommended by relatives and friends to massage my paralysed limbs with the hope that I could regain full use of them again.

The first sinseh who treated me was recommended by a relative who sang praises of his skills in “healing hopeless cases” like mine.

He would heat up a pungent liniment on a small tin can stove that he brought along and applied it copiously on my body and massaged me from head to toe. I was not allowed to bathe for four hours after that although the smell of the liniment was nauseating.

He had assured my parents that it would take no more than three months for me to be up and running. When it was apparent that his massages did nothing to cure me, he collected the final instalment of his overpriced fees and was never heard from again.

I went through a few more of such sinsehs, each charging exorbitant sums but delivering nothing. I was still as paralysed as ever and my parents were none the wiser. They were always on the lookout for more treatments as soon as the previous ones failed to show any result.

Friends who were into multi-level marketing were never short of newfangled products to recommend as well. The various health supplements, gadgets and magnetic mattresses could purportedly help with my recovery. My parents were invariably taken in by their persuasive wiles. None of them worked.

Even then, my parents never gave up hope. They took me to temples situated in remote places at ungodly hours to consult mediums of the supernatural. Some of the mediums said that I was punished for offending a deity. Others said that it was my karma.

The mediums performed elaborate rituals to appease the deity I had supposedly offended and made me drink water mixed with ashes from burnt paper talismans. These did not work either.

I am still troubled by the fact that my parents had used up a large chunk of their hard-earned savings to chase after sham treatments for me. There was no shortage of tricksters who were more than eager to prey on their desperation.

Although I had indicated to them that I was not too keen on the treatments, parents being parents, they wanted to give me the best they could afford. I cannot fault them for their lapses in judgement in this matter. They did it because of their unwavering love for me.

The harsh reality is that there is no sure cure for spinal cord injury at this point in time. That is the reality I have come to accept after many years of hoping against hope. Once the spinal cord is injured, there is little medical science can do to reverse the damage and restore the loss of function and sensation.

The most promising treatment for now is stem cell therapy. However, it is still at clinical trial stages and very expensive. There is also no guarantee that it will work for everyone undergoing the treatment.

Likewise, robotic exoskeletons are being extensively developed to assist people with spinal cord injury. Again this technology is still not widely available and is expensive to boot.

All said, physiotherapy was the only treatment that worked for me. It helped improve strength in the remaining muscles that were functional. It kept my limbs supple. I worked with a dedicated physiotherapist for five years in an attempt to walk again. That effort failed but I have no regrets because I am proud that I tried my best.

Whenever I meet people with recently acquired spinal cord injury, my first advice is to not waste money on alternative treatments that have not been proven to work. This advice usually falls on deaf ears.

They would still put themselves through the same useless treatments only to discover later that it was indeed an exercise in futility. It is sad to see them repeating the same mistakes my parents made despite being warned.

The tens of thousands of ringgit frittered away could have been spent on better wheelchairs, assistive devices and support services. I hope people in situations similar to mine will take heed of this advice.

I have not had the opportunity to explore the older parts of Kuala Lumpur although I have been living here for the past six years. The story of city is hidden in the buildings and roads that are now overshadowed by modern skyscrapers and monstrous structures. Bit by bit, the historical and cultural significance of what made Kuala Lumpur the city it is today is being chipped away in the name of progress and development.

Rakan KL, a people’s movement to preserve the heritage of Kuala Lumpur have been organising activities and walkabouts around the historical parts of the city. Wuan and I participated in the Merdeka Walk 2 lead by Victor Chin last Saturday. It was to begin from Tun Shin Hospital at Jalan Pudu and end at the Chin Woo Stadium at Jalan Hang Jebat. 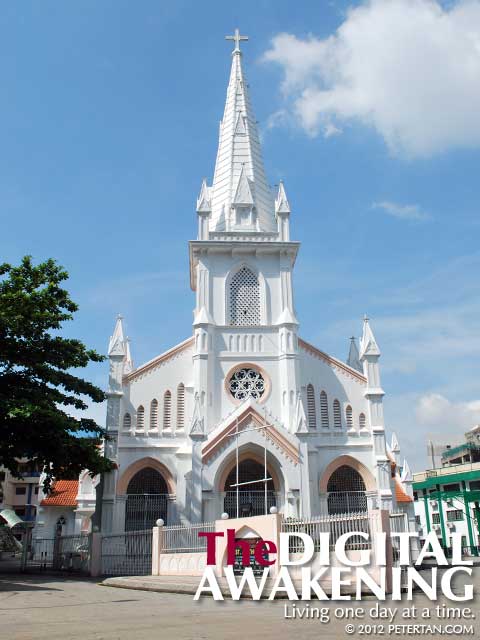 We decided to park our car at the Church of St. Anthony and waited to join the group there as most of the locations in the walkabout are on that side of the road. The last time I prayed the Mass here was in 2005 when the church was being refurbished. Mass was celebrated at the Dewan Dominic of the Kuala Lumpur Archdiocesan Pastoral Centre which is just behind the church then. 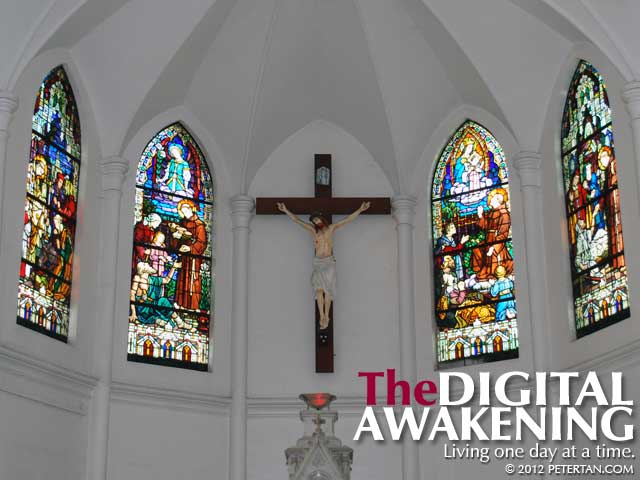 Beautiful stained glass windows behind the altar at the Church of St. Anthony in Kuala Lumpur.

The Church of St. Anthony was built in 1911. The magnificent whitewashed facade with its tall spire rose all the way up to the sky. Surprisingly, I could easily enter from the side entrance. The crucifix above the main altar is flanked by two beautiful stained glass windows on each side. Despite the blistering heat outside, the high ceiling kept the air cool inside. As I sat there taking in holiness of the ambience, a soothing calm came over me. It has been a long while since I felt the Grace of God flowing in me. 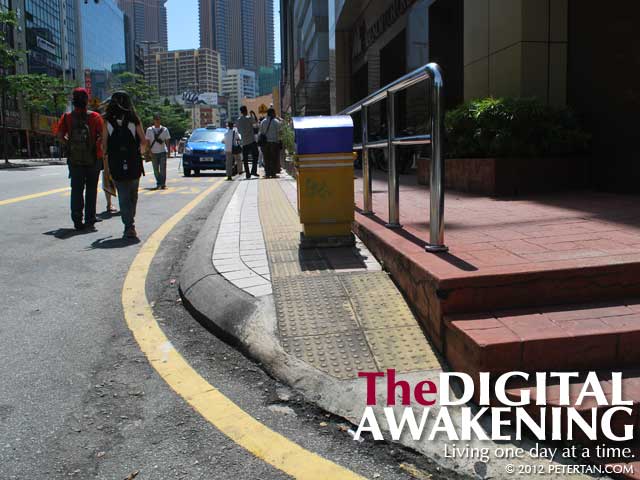 From the church, we made our way to the disused car showroom at the junction of Jalan Robertson and Jalan Pudu. The sidewalk, although paved with tactile guide path, had a poorly done kerb ramp that was steep and dangerous for wheelchair users even with assistance. That was a glaring example of doing for the sake of doing without taking into consideration if the facility was useful or not. Making a kerb ramp does not make the sidewalk accessible if they do not conform to accessibility standards. 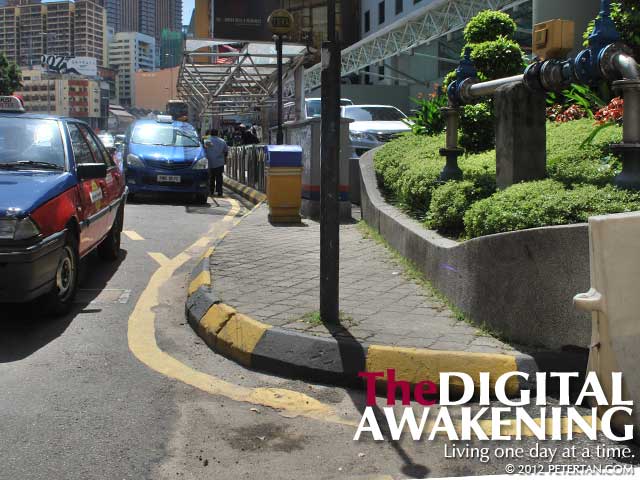 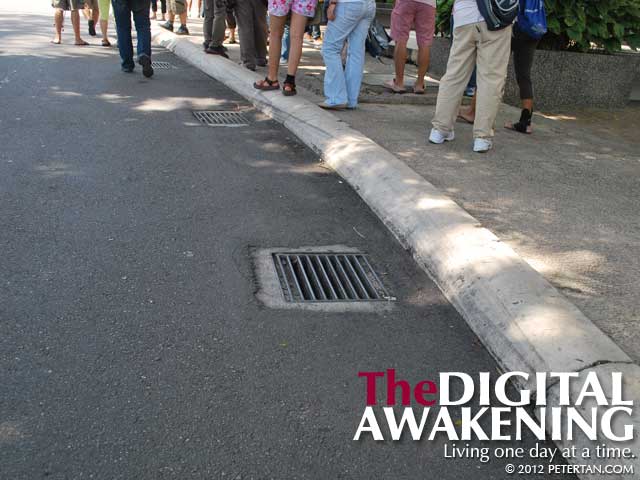 These drain grates along Jalan Galloway may trap wheelchair casters and throw the wheelchair user off the chair.

With the sidewalks practically inaccessible, I had to go on the road most of the time while speeding vehicles whizzed by. Drain grates with the grilles running parallel to the road can potentially trap wheelchair casters and throw the user off the wheelchair. The grates are dangerous to cyclists as well. To avoid these grates, I had to go further out on the road to brave oncoming traffic. Fortunately, Felix Kusmanto, a friend from many years ago walked ahead of us to direct traffic away from me. Still, these are the dangers that wheelchair users have to contend with while out in the streets of Kuala Lumpur. 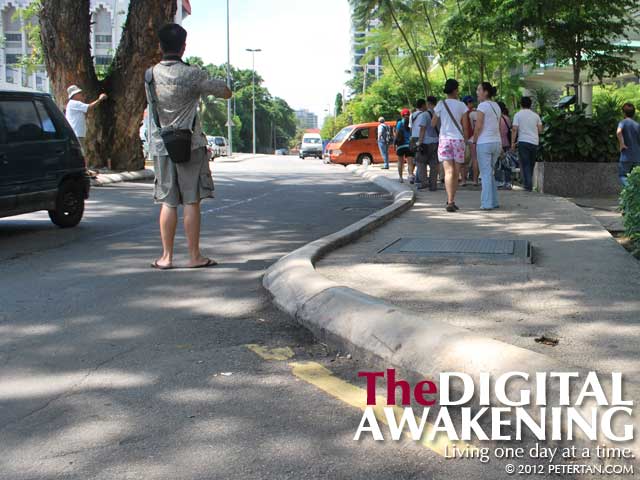 Felix directing traffic away from me. I had to get on the road and in the way of oncoming traffic because of the drain grates and inaccessible sidewalk.

The group took a breather under the shade of one of the houses at Jalan Sin Chew Kee. This road is lined with two rows of old houses which are priced over a million ringgit each. This quieter area is in sharp contrast against the busy Jalan Pudu which is just a stone’s throw away. Wuan and I had to abandon the walkabout and turn back here as the way to the other stops was fraught with barriers and other difficulties that made it a gargantuan task to traverse on a wheelchair. 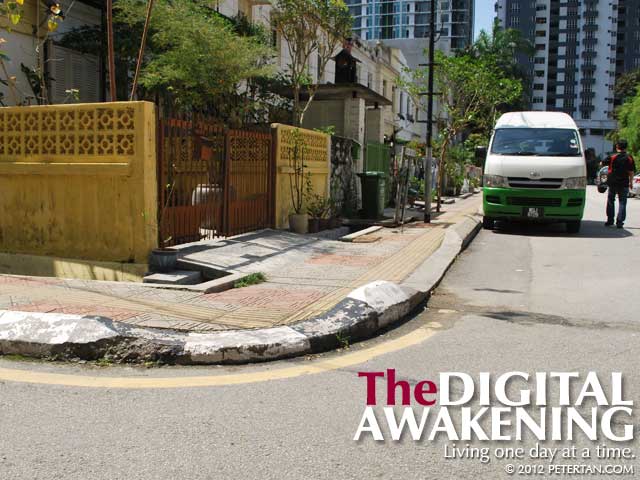 Jalan Sin Chew Kee is an oasis of calm in the hustle and bustle of Jalan Pudu in Kuala Lumpur.

We took the road between Swiss Garden Residences and Swiss Garden Hotel and came upon drain grates with grilles parallel to the road cut across the road. There was no avoiding it this time. Wuan had to push my wheelchair diagonally against the grates to avoid having my casters fall into the gaps between the grilles. 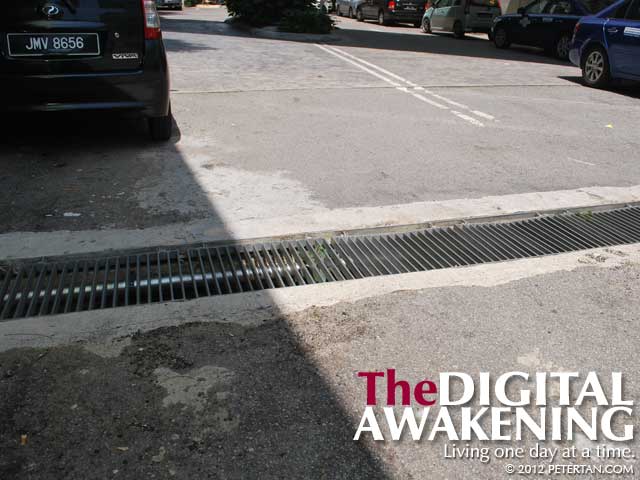 These drain grates that stretched across the road made it dangerous for wheelchair to go over as the gaps may trap the casters and throw the user off the chair.

It is such a shame for me to discover that the city I now call home is so inaccessible to disabled people. It is impossible to move around independently, conveniently and safely on the streets in a wheelchair. The sidewalks usually have poorly constructed ramps or even none at all. Despite all these barriers, I will attempt to explore more of the heritage areas together with Wuan and Rakan KL before these places are gone forever, swallowed up by cold glass towers and soulles concrete jungles.