Last Friday morning, Uncle Paul, Peter and I went out for breakfast and then took the old winding road from Bayan Lepas to Teluk Kumbar and then to Balik Pulau. It has been a while since I have been around there. I think it must have been as long for Uncle Paul since he does not come back from Melaka as often.

Development is slowly creeping up to what was once an idyllic fishing village in Teluk Kumbar. High-rise apartments and housing estates are cropping up all over the place. Fortunately, the plantations after Teluk Kumbar still retain their greenery. Nutmeg and clove are still being cultivated. And the durian trees are already fruiting. 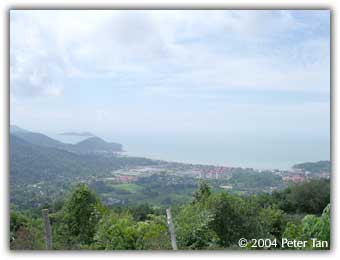 View of Gertak Sanggul in the distance.

Peter took a left turn somewhere between Teluk Kumbar and Balik Pulau and drove up the hill on the cemented track. He had heard of a restaurant serving Thai food on the hilltop and wanted to have a look. The journey up took a good twenty minutes across durian orchards and chicken coops housing several hundred chickens each. There are several telecommunication towers just before the summit.

As we came to the top, it was bare. Trees were cleared and there was little foliage to shade us from the blistering sun. We were greeted with several chalets built atop small boats resting on stilts and the restaurant which overlooked the Straits of Melaka and the fishing villages and durian orchards of Genting and Balik Pulau. The other side of the peak commanded the sweeping view of Teluk Kumbar, which was once a small fishing village dotted with attap-roofed houses but is now being gradually replaced by towering concrete apartments. 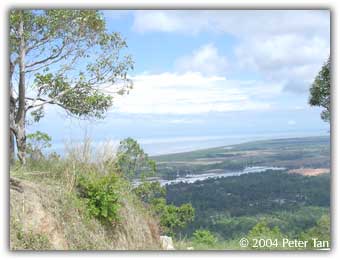 The flooded paddy fields of Genting.

The view up there was simply breathtaking. The photographs that I took do not do justice to the splendid panorama that spread out across as far as our eyes could see. It is unfortunate that the operators of this small resort chose to adorn the structures there with garish colours and ornaments which spoilt the natural scenery somewhat.

After having taken in the extraordinary sights we never knew existed, we made our way down. The track down was extremely steep and hair-raising. From where we were, we could see paddy fields being prepared for cultivation and the steeples of a mosque rising up from the flatlands of Penang?s hinterlands and the hills of Balik Pulau. Later, we were told that recreational hikers frequent the track during the evenings and on weekends.