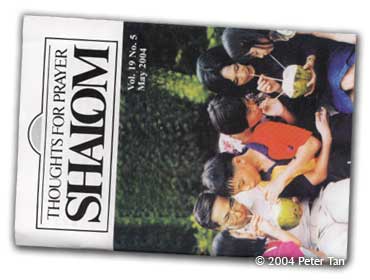 About two months ago, I was greatly disturbed by a family matter that had been dragging on for the past ten years. After several attempts to have it resolved amicably proved futile, I resorted to getting legal advice. The issue is still being pursued by the lawyer that I had engaged. The dispute that stemmed from that whole affair truly disheartened me. There was one particular day that I felt most distressed over the entire episode. That morning, I was praying with the Shalom. It is a booklet with a devotional theme for each day of the month that many Catholics use with their daily prayers. One paragraph quoted from the Holy Bible for that day struck me. It was a conversation Jesus had with His disciples after their last meal. That exchange is known as the Farewell Discourses. Among them, He had said:

I read those verses again and again. For a long time I have not felt the serenity that came over me that morning. More often than not, I had thought that I could make things happen the way I wanted. When they did not go the way I had expected, I would become all anxious and disconsolate. Since my journey with Jesus began many months ago, among others, I have progressively learnt patience and trusting in His providence. Life has become so much simpler. Peace was what I needed most during that distressing moment and peace was what He gave me. What more can I ask for?